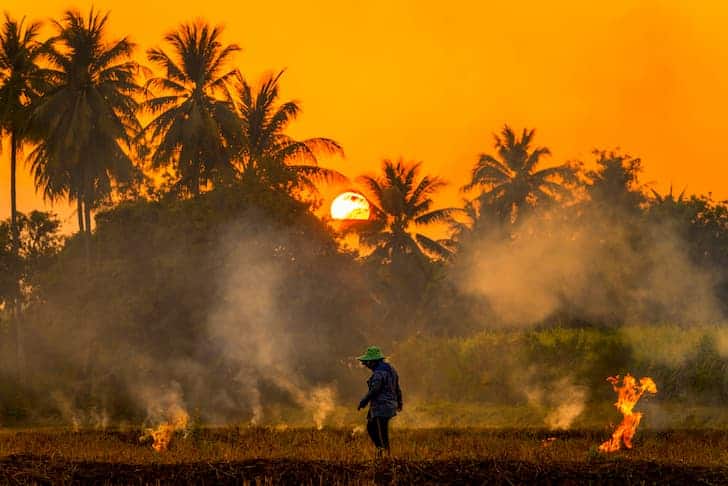 Developing means of farming and agriculture is the reason humans can live in the world today. It is a necessary means of survival, without which there would be famines all over the world. For thousands of years, agriculture was a natural process that did not harm the land it was done on. In fact, farmers were able to pass down their land for many generations, and it would still be fertile as ever.

To begin with, the earliest source of pollution has been pesticides and fertilizers. Modern-day pesticides & fertilizers have to deal with the local pests that have existed for hundreds of years along with the new invasive species. And so, they are laden with chemicals that are not found in nature.

Once they have been sprayed, it does not disappear completely. Some of it mixes with the water and seeps into the ground. The rest is absorbed by the plant itself. As a result, the local streams that are supplied water from the ground become contaminated, as do the animals that eat these crops and plants.

Contaminated water used for irrigation is one further source of pollution. Much of the water we use comes from groundwater reservoirs, canals and through the rains. While plenty of it is clean and pure water, other sources are polluted with organic compounds and heavy metals. This happens due to the disposal of industrial and agricultural waste in local bodies of water.

As a result, the crops are exposed to water, which has small amounts of mercury, arsenic, lead, and cadmium dissolved in it. The process of agricultural pollution becomes harder to fight when such water poisons livestock and causes crop failure.

Further problems are caused by soil erosion and sedimentation. The soil is comprised of many layers, and it is only the topmost layer that can support farming or grazing. Due to inefficient farming practices, this soil is left open for erosion and leads to declining fertility each year. Whether eroded by water or wind, all this soil has to be deposited somewhere or the other.

The resulting sedimentation causes the soil to build up in areas such as rivers, streams, ditches and surrounding fields. And so, the process of agricultural pollution prevents the natural movement of water, aquatic animals and nutrients to other fertile areas.

In the olden days, farmers would keep as much livestock as their land could support. The cattle, sheep, pigs, chickens and other animals were fed natural diets, which was supplemented by the waste left over from the crops. As a result, the animals contributed to keeping the farm healthy as well.

As of now, livestock is grown in cramped conditions where it is fed unnatural diets and sent to slaughterhouses on a regular basis. As a result, they add to the process of agricultural pollution by way of emissions.

Growing exotic crops and reducing the natural species in a certain area has become the norm for agriculture. However, it is simply adding to the process of agricultural pollution. With the arrival of new crops, the native population has to deal with new diseases, pests, and weeds that it is not capable of fighting.

As a result, the invasive species destroy the local vegetation and wildlife, altering the ecosystem permanently. This is especially the case with Genetically Modified Foods(GMO), which create plant and animal species that can wipe out the existing species in a matter of years.

When these substances washed into waterways or leach into groundwater sources or get absorbed by plants and are eventually consumed by animals and humans affecting their health or even causing premature deaths. Heavy metals can cause crop failure and poison livestock from contaminated water or food.

Intensive farming operations greatly contribute to soil erosion and sedimentation as millions of fertile soils are broken down, degraded, and eroded via stormwater runoffs, which end up accumulating as sediments in rivers, streams, lakes, oceans or other land regions.  Thus, it affects water quality by making it dirty or contaminating it with the agrochemical residues present in the soils.

Sedimentation also contributes to the build-up of the agricultural pollutants in waterways and other land areas. Sedimentation may also restrict light penetration in water, thereby affecting aquatic life forms, and the consequential turbidity can hamper the feeding habits of the aquatic fish.

Manures and Biosolids frequently contain nutrients, including nitrogen, carbon, and phosphorus. Furthermore, because they are industrially processed, they may also have within them contaminants such as personal care products (PPCPs) and pharmaceuticals. These products have been found in human and animal bodies and are believed to have negative health impacts on wildlife, animals, and humans.

Agricultural pollution becomes even harder to manage with such types of organic contaminants.

Poor land management also leads to an irreversible decline in soil fertility. Profound land management is crucial for keeping agricultural pollution to a minimum level. Therefore farmers should have the awareness of how their actions can impact the environment.

The manure and fertilizers usually contain excess chemical nutrients, especially phosphorus and nitrogen, and cause nutrient pollution from agricultural sources. Excess nutrients can have tragic consequences on water quality and the survival of aquatic life.

When these nutrients are washed into the water systems, e.g., rivers, lakes, streams or oceans during rainy periods, it alters the marine and freshwater nutrient cycles and as an outcome the species composition of the respective ecosystems. The most common consequence is eutrophication, which depletes the water dissolved oxygen, and in consequence, can kill fish and other aquatic life.

Agricultural pollution is the main source of pollution in water and lakes. Chemicals from fertilizers and pesticides make their way into the groundwater that ends up in drinking water. Health-related problems may occur as it contributes to a blue baby syndrome which causes death in infants.

Oil, degreasing agents, metals and toxins from farm equipment cause health problems when they get into drinking water.

Fertilizers, manure, waste, and ammonia turn into nitrate and phosphates, and when washed into nearby water bodies, the production of algae gets enhanced that reduces the amount of oxygen present in water, which results in the death of many aquatic animals.

Again, bacteria and parasites from animal waste can get into drinking water, which can pose serious health hazards for various marine life and animals. Thus, the oxygen levels are likely to decline, which can cause the death of fishes and other water animals.

Eutrophication is the dense growth of plant life and algae on the water surface, causing high incidences of algal blooms. In case of excessive use of fertilizers and pesticides, nitrogen, phosphorus and other chemical nutrients get washed into nearby surface waters by rain or irrigation and lead to the eutrophication of rivers and lakes by supporting the production of algae.

Eutrophication extensively depletes the oxygen dissolved in water, which can adversely affect the aquatic system by killing fish and other aquatic biotas. It is also linked to an increased incidence of paralytic shellfish poisoning in humans, leading to death.

4. A Decrease in Crop Yields

The excessive use of fertilizers and pesticides combined with other agrochemicals control invasive pests, weeds, and diseases and produce large crop yields. However, the positive effects of these substances last for a certain time since the soil is likely to suffer in the long-term from the excessive use of these toxic chemical elements.

Since they remain in the soil for years, in the long run, crop yields are reduced, and the soil loses the optimal characteristics to produce crops due to agricultural pollution. They have the potential of contaminating waters and plants and kills soil microorganisms as well as beneficial insects.

The agricultural pollution contaminates soil that leads to soil pollution and depletion of soil fertility by killing soil microorganisms. The chemicals that are part of pesticides and other different kinds of agrochemicals can cause long-lasting damage to the soil. This can gradually alter the soil microbial activities and soil chemistry and reduces soil fertility.

Thus, every year millions of fertile soils are lost due to the use of synthetic fertilizers, pesticides, and herbicides combined with other farm practices.

Agricultural pollution also leads to air pollution. Many machines such as tractors or harvesters used for tilling, harvesting, and other farm activities emit harmful greenhouse gases like CO2 by combusting fossil fuel, which, in turn, can lead to global warming.

Moreover, farm animals and fertilized soils emit large amounts of carbon and nitrogen-based compounds such as nitrogen oxides and ammonia that qualify as the potential greenhouse gases and methane, considered as one of the most harmful greenhouse gases. Besides, some soil biochemical processes naturally emit numerous greenhouse gasses.

An ecosystem is quite sensitive to small changes that may lead to big effects in the natural ecosystem. The persistent use of chemical products in agricultural production degrades and destroys the soils and waters, affects animals, plants, and wildlife, gradually altering the ecosystems which support biodiversity.

Furthermore, the use of pesticides can kill beneficial insects, soil microorganisms, birds and some rare small species like butterflies, which have far-reaching effects on biodiversity. If these insects vanish from the ecosystem, plants will be adversely affected as these insects are responsible for the fertilization of crops.

Since these chemicals remain in the soils for many years, the repercussions on biodiversity are massive.

Water pollution is another big problem caused by agricultural pollution. Agricultural operations and practices such as inappropriate water management and irrigation mainly lead to water pollution from surface runoff, both to surface and groundwater.

The excessive use of fertilizers and pesticides, many harmful substances reach our lakes, rivers and eventually the groundwater leading to widespread contamination of waterways and ground waters and depreciate water quality.

Soil erosion and sedimentation equally contaminate the water, making it dirty, and increasing its turbidity. In turn, plants, wildlife, humans, animals and aquatic life are negatively affected since we need clean drinking water to survive and stay healthy.

Agricultural pollution can also have adverse effects on animals. Since animals consume parts of the crop yield, they are heavily affected by pesticides and can even die from the consumption of these contaminated crops.

Agricultural pollution can even change the dynamics of the whole ecosystem as it becomes a problem for parts of the local plants since new invasive species could impact the population of native species in an adverse way. These invasive species can carry pests and diseases which can harm the local ecosystem.

Since the local species are not able to deal with some of the pests, biodiversity may be reduced.

The local native plants can also be affected by the use of genetically modified organisms in the form of crops leading to genetic contamination. This could also lead to the extinction of native species.

Keeping agricultural pollution in check is much harder than it seems. For the farms to become clean once again, levels of water, soil, and industrial pollution have to be kept in check. Over the last decade or so, governments have become stricter about enforcing regulations.

Farmers often unknowingly cause harm to the environmental system. They should be taught that the excessive use of fertilizer and pesticides has a huge adverse impact on the whole ecosystem. Thus, by increasing the farmers’ knowledge and awareness, agricultural pollution can be mitigated to a certain degree. They must know:

Many farms are moving back to traditional manure, direct irrigation from local water bodies and organic means of keeping pest populations in check. But for the process of agricultural pollution to be fully reigned in, there has to be a complete shift in the way agriculture is practiced.