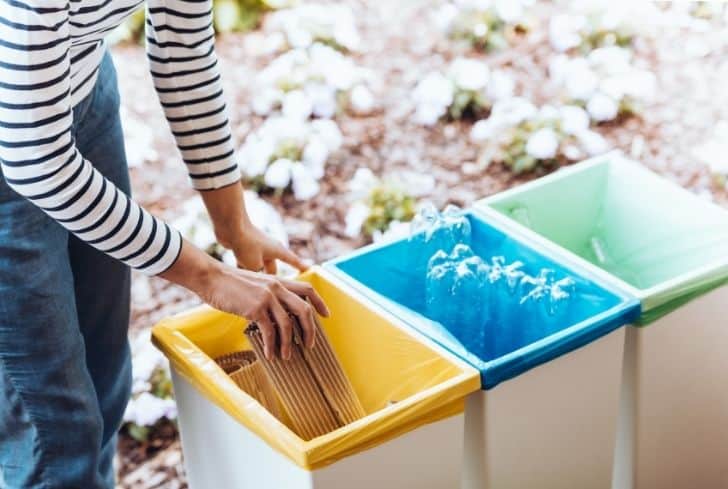 Almost anything we do, every product we use and everywhere we go, leads to us polluting the environment in one way or another. Driving pollutes the air, sending waste to landfills pollutes the air and land, and growing food using fertilizers and pesticides poisons groundwater as well as surrounding bodies of water.

One of the easiest ways of cutting back on pollution is recycling. Recycling converts waste materials into new materials and objects. It is the third component of the ‘Reduce, Reuse, and Recycle‘ waste hierarchy and is a vital part of cleaning the environment. This article looks into how recycling could help reduce pollution.

How Does Recycling Help Reduce Pollution?

1. An overall reduction in pollution levels

Recycling reduces the need to grow, harvest and extract raw materials from the earth for additional products. This, therefore, lessens the harmful disruption and damage done to the natural world. It means fewer forests will be cut down, wild animals will be less harmed or displaced, no more diversion of rivers and as such, less pollution of the soil, water and air. Also if more plastics are recycled, less of them will find their way into the ocean waters, damaging marine life

Making products from recycled materials requires less energy as compared to making them using raw materials. The huge difference in energy means less pollution. For instance, producing new aluminum from old products like recycled cans and foil uses 95% less energy than making it from scratch. The figure is 70% with regards to steel. Saving on energy means fewer strains on the power grid, which means less carbon is emitted at the power plant as a result of drawing too much energy

4. It reduces the demand for more raw materials

As already mentioned, recycling reduces the need to grow, harvest and extract raw materials from the earth for additional products. As such, if more is recycled, the raw materials from which these products are extracted will not be touched in quite a while.

This is what it means for a reduction in the demand for more raw materials. When these raw materials, such as forests are hunted, the vulnerable people living next to them also suffer, not forgetting the corresponding river systems.

5. It is better at it than collecting waste

Landfills, before they help a product decompose, might take a very long time. At the same time, they will allow leaching which will contaminate or pollute bodies of water. It also results in the production of harmful gases like methane, polluting the air. All this is avoided if you decide to recycle.

The point of avoiding pollution is to preserve natural resources. Recycling is a wonderful tool that will make new products, and at the same time avoid pollution, by conserving natural resources. For instance, recycling paper and wood saves trees and forests.

Recycling plastic means creating less new plastic which is beneficial for the environment, especially because plastics are made from hydrocarbons, which terribly pollute the environment. Recycling metals could also result in less need for the risky, expensive and damaging mining and extraction of new metal ores.

Who Contributes To The Pollution The Most?

Emissions from these plants have to be the biggest culprits of polluting the environment. Industries such as tanneries, lead smelting, mining and ore processing, and chemical and product manufacturing are giant pollutants. The majority process raw materials to get the final product, through the use of toxic chemicals that contain toxic elements like cadmium, lead, chromium and mercury.

When these pollutants end up in underground waters and the soil, they contaminate the water we drink and the food we eat. The by-products of these production processes include harmful gases, like carbon monoxide, carbon dioxide and sulfur dioxide, that have a greenhouse effect.

Additionally, they pollute the air and could contribute to poor visibility. Some of these gases are also harmful if inhaled and could also produce acid rain, which affects everything it touches, including marine wildlife.

Combusting fossil fuels is the major reason as to why we have smog clouds and bad air quality in urban areas. Such combustion is done in power plants that use fossil fuels to generate heat and emissions from cars and other vehicles. The result is carbon monoxide, nitrogen oxide, lead, dust particles and volatile organic compounds (VOCs) which when released into the air, create smog clouds.

Motor vehicles are responsible for about 75% of carbon monoxide pollution in the US, with the transportation industry causing 14% of greenhouse gas emissions globally. Low-income countries also burn charcoal and wood, resulting in carbon monoxides and dioxides, and dust particles.

This is another significant contributor to pollution in the world. Crop cultivation requires the use of pesticides and fertilizers that slowly poison the soil. They also sip underground and poison groundwater reservoirs and rivers. Livestock cultivation also requires heavily on scarce water resources, could result in overgrazing and is the reason why most forests are being cut down.

Raising them also results in air pollution. For instance, raising cattle for food emits 5% of all greenhouse gas emissions as they release massive amounts of methane into the atmosphere. Cattle are the animal species responsible for the most emissions, representing about 65% of the livestock sector’s emissions

How can we forget the impact that humans have on the environment? Humans, in their exploration, have come up with all these technologies, that although benefit us, are taking a toll on the environment. Let us not forget about landfills, where we really love to deposit any trash we have. Landfills grow bigger daily and more waste is buried underground.

Although landfills are supposed to aid trash in decomposing, the truth is not all trash decomposes by itself even for a couple of centuries, like plastics. Landfills emit methane as a by-product of the decomposition process, which is a greenhouse gas, about 30 times more potent than carbon dioxide when it comes to trapping heat. Decomposing waste could also leach into groundwater streams and contaminate fresh and drinkable water.

Certainly! Recycling reduces the amount of waste that is sent to incinerators. Incineration produces emissions that contain heavy metals and harmful dioxins that are responsible for acid rain and global warming. Manufacturing with recycled materials save on energy, water and produces less water and air pollution.

Recycling reduces greenhouse gas emissions equal to taking about 5 million cars off the road, and recycled paper produces 73% less air pollution than when made from raw materials. Recycling, indeed helps the air stay healthy. The Pennsylvania DEP, in 2005, said that recycling reduced greenhouse gases by the equivalent of 9 million tons of carbon dioxide. Such reduction is attributed to the fact that recycling, reduces the need to burn fossil fuels, like gasoline, coal and diesel.

Also, according to National Geographic, a whopping 91% of plastic is not recycled, despite plastic being the greatest enemy of ocean water. Recycling helps keep these plastics out of the ocean and reduces the amount of ‘new’ plastic in circulation.

Electronic waste, which is some of the fastest-growing types of waste, contains mercury, lead and other toxins that could leak out of landfills and into local water sources. Landfills are known to release some of these toxins and much more into groundwater, and nearby bodies of water such as rivers.

They, therefore, poison the water and could infect a lot more people downstream. Recycling will ensure such leaks are fixed and water is safe from contamination. There are a myriad of companies who are helping with recycling e-waste or electronic waste, helping save the environment

Obviously, yes! The term ‘landfills’ means something is filled on land, and in this case, waste. The Stanford Recycling Centre explains that each American throws away 7.5 lbs of garbage, the majority of which ends up in landfills, taking up a lot of land. Landfills are supposed to hold waste for as long as possible, but at the same time, such waste pollutes the land.

To reduce solid waste pollution on land, recycling does a lot to help. By recycling, you will be reducing the amounts of waste going into landfills, as well as the environment in general. The US EPA estimates that when a company recycles 1 ton of paper, they save an equivalent of 17 trees

Of course, recycling reduces plastic pollution. As already mentioned, recycling helps keep plastics out of the oceans and reduces the amounts of ‘new’ plastic in circulation. Plastic is the primary source of waste in oceans and recycling will mean fewer plastics in these bodies of water and therefore fewer effects on marine life.

Plastics take a ridiculously long time to decompose and therefore, dumping them into landfills, condemns that piece of land to centuries of plastic waste that will never decompose. Recycling would therefore decrease plastic pollution or trash and therefore save the environment some years of decomposition. Plastic bags have a way of finding themselves into marine animals such as fish and turtles. Recycling them will mean more of these beings will survive, reproduce, and the environment will be better.