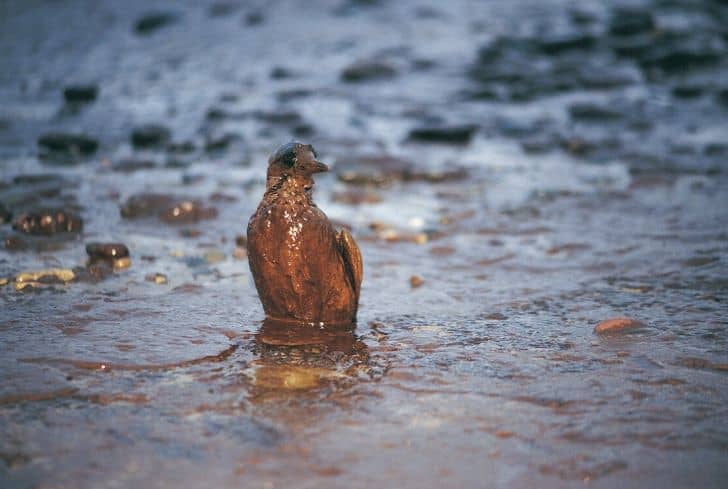 Our planet, Earth, has large reserves of oil and gas trapped deep beneath its surface. Occasionally, these reserves develop cracks, and some of the oil or gas seep out. However, this is a part of nature and rarely causes any major damage. On the other hand, there are times when the same problem is caused because of human interference, and it can cause a great deal of damage to marine ecosystems.

In the last thirty-odd years, the issue of oil spills and their effects has taken on much importance. This is because when an oil spill occurs, it causes a multitude of problems for the environment and us.

An oil spill happens when liquid petroleum is released into the environment by vehicle, vessel or pipeline. It happens on a large scale and is mostly seen in water bodies. It happens due to human negligence and is a major form of pollution. The source of the spill is many. Crude oil can be released by tankers on land. In water bodies, the spill occurs due to drilling rigs, offshore oil platforms and well.

Oil spills and their effects can also be experienced with refined petroleum or even waste oil from large scale industries. What is common in all of them is that the damage caused by them is permanent and takes a long time to clean up.

As oil spills, it floats on water and prevents sunlight from passing through it. The shiny substance that you sometimes see on the top layer of water is nothing but oil, which makes it difficult for plants and sea animals to survive. Cleaning up of oil spill is no easy task. Various factors need to be considered before carrying out operations. Some of them being the amount of oil spilled, the temperature of the water, type of beaches and many more.

Oil spills can prove fatal for plants, animals and human life. The substance is so toxic that it can cause massive loss of species that live in the sea. Oil spill penetrates into the plumage and fur of birds, breaks down the insulating capabilities of the feather, which makes them heavier, disallow them to fly and kill them via poisoning or hypothermia.

Even though the public attention towards oil spills has grown in the last three decades, they have been happening for over a century. Since the coming of the industrial revolution, such accidents have been happening. However, the large scale problems that follow oil spills and their effects are more obvious to us today.

Serious Effects of Oil Spill on Environment and the Wildlife

Depending on the magnitude of the spill and its location, many elements of the environment may be affected, and the effects can vary, ranging from minimal to serious ones. Oil spills can have a major impact on the temporary animal and fish loss of habitat. Heavy oils may affect several organism functions like respiration, feeding, and thermo-regulation. At the same time, the entire ecosystem can change temporarily because of the chemical components and elements of the spilled oil that are toxic to the environment.

Usually, the oil spills occurring in a water environment (e.g., ocean or seas, or leaks from rigs ending up in water) are rapidly degraded as compared to oil spills on land or in the subsurface environment; however, if an aquatic oil spill is substantial enough (such as in the case of Exxon Valdez 1989 spill or the April 2010 BP spill in the Gulf of Mexico from offshore drilling) then the effects on marine life, birds, humans and ecosystems including marshes and wetlands, as well as shorelines or gulf coasts could be serious.

First of all is the environmental effect. The animal life that lives in the water or near the shore is the ones most affected by the spill. In most cases, the oil simply chokes the animals to death. Others that live face a number of other problems.

The oil finds its way into the fur and plumage of the animals. Oil destroys the insulating ability of fur-bearing mammals, such as sea otters, and the water repellency of a bird’s feathers, thus exposing these creatures to the harsh elements. Without the ability to repel water and insulate from the cold water, birds and mammals will die from hypothermia. Both birds and mammals find it harder to float in the water or regulate their body temperatures.

Many baby animals and birds starve to death since their parents cannot detect their natural body scent. Birds that preen themselves to get rid of the oil accidentally swallow the oil and die due to the toxic effects.

If the oil is mixed into the water column, fish, shellfish, and corals can come into contact with oil, and shellfish can also be exposed in the intertidal zone. When exposed to oil, adult fish may experience reduced growth, enlarged livers, heart and respiration rate change, fin erosion, and reproduction impairment. Fish eggs and larvae can be especially sensitive to lethal and sub-lethal impacts. Even when lethal impacts are not observed, oil can make fish and shellfish unsafe for humans to eat.

In many cases, the animals become blind due to repeated exposure to the oil. Dolphins, sea otters, fish, countless species of birds and many oceanic mammals face these consequences. Countering these effects and cleaning the oil can take anywhere between a few weeks to many years, depending on the damage caused.

The effects of oil spills on wildlife can adversely affect humans. The contamination of local ecosystems can impact communities who rely on said ecosystems to survive, with crops and food sources becoming poisonous or disappearing altogether as a result of food chains being destabilized.

Water supplies in surrounding areas are at risk of contamination from oil spills. In 2013, oil spills interrupted the supply of water for 300,000 people in Miri, Malaysia and 80,000 people in Coca, Ecuador.

Fishermen and local ship workers can lose their sources of income due to the health problems associated with exposure to oil, such as respiratory damage, decreased immunity and increased cancer risk. This could deprive communities of essential resources and revenue needed to support them.

Oil spills can affect the air quality in surrounding areas, releasing toxic chemicals into the atmosphere. Following the 2010 Deepwater Horizon disaster,  a 2015 study found concentrations of benzene and fine particulate matter around southeast Louisiana that were “high enough to exceed public health criteria, with measurable exposure disparities in the coastal areas closer to the spill and clean-up activities.”

A 2019 study in Nigeria, Africa’s most populous country and largest oil producer, discovered that nearby oil spills increased neonatal mortality by 38.3% per 1,000 live births. Further evidence suggesting these effects persist for several years after an oil spill takes place, with the study describing the impact as “an alarming ongoing human tragedy.”

Attempts to clean oil spills run the risk of exacerbating problems, such as controlled burnings of oil slicks that can contribute to air pollution or the dispersants used to dissipate oil slicks, which can potentially increase the contamination of surrounding water and wildlife. In colder areas, oil-eating microbes are slowed down, leaving those areas particularly vulnerable to oil spills.

The second major effect of the oil spill is seen in the economy. When precious crude oil or refined petroleum is lost, it affects the amount of petroleum and gas available for use. This means more barrels have to be imported from other countries. Then comes the process of cleaning the oil spill, which requires a lot of financing. Although the company responsible for the oil spills and their effects has to clean it up, there is a lot of government help required at this point.

The workers that are brought on board to clean up the spill face tremendous health problems later in life as well. Their medical treatment has to be paid for and becomes the responsibility of the government. Putting all the methods of recovery into place and monitoring them takes away resources from other more important work and hits the economy in subtle but powerful ways.

See also  Is Hessian Biodegradable? (And Various Uses of it)

The local tourism industry suffers a huge setback as most of the tourists stay away from such places. Dead birds, sticky oil and huge tarballs become a common sight. Due to this, various activities such as sailing, swimming, rafting, fishing, parachute gliding cannot be performed. Industries that rely on seawater to carry on their day to day activities halt their operations till it gets cleaned.

There is a public outcry against the practice of shipping oil, and the company responsible in almost every incident of an oil spill. In the Exxon Valdez oil spill, 38,000 people sued the company over the environmental damage. The plaintiffs were ultimately awarded $287 million in compensatory damages and $380.6 million in punitive damages. This same incident also derailed the plans to build a facility to remove oil from the Arctic National Wildlife Refuge. Opponents worried about the possible effects of an oil spill on land in a protected habitat.

In addition, the 1969 oil spill in Santa Barbara, Calif., caused many laws to be placed on the oil companies operating in and around the United States. It placed a moratorium on the building of new oil refineries and also a number of rules regarding the transport of oil.

One of the biggest oil spills seen in history happened during the Gulf war when approximately 240 to 336 million gallons of crude oil flowed into the Persian Gulf. It was considered one of the worst disasters, beating the Ixtoc 1 Oil spill in Mexico. A recent major oil spill happened when an oil rig, Deepwater Horizon sank in the Gulf of Mexico.

The spill released somewhere between 172 to 180 million gallons of crude oil into the environment. In the year 2010 alone, six oil spills were seen in the USA. Outside of the United States, oil spills have happened in Canada, Nigeria, France, the United Kingdom and China.

While the long term issues caused by oil spills and their effects are yet to be fully observed, the daily problems are clear. However, most corporations still do not have a solid plan in place for when this emergency may strike.

One must understand that oil spill is not the only threat that marine life is facing. Increasing pollution, contamination of industrial chemicals, exploitation of the resources they provide are also some of the serious threats.