What is GMO(Genetically Modified Organism)?

Genetically modified organisms (GMOs) are those whose genome have been artificially altered in a lab so as to support the expression of wanted physiological characteristics or the growth of wanted organic products. In conservative production of livestock, agricultural farming and breeding of pets, the technique has been used for a long time in the custom of selecting breeding individuals from a group so as to give out an offspring that has the desired characteristics.

The entire process of artificial alteration is termed as genetic engineering and is habitually aimed at producing combinations of bacteria, virus, and animal genes that do not occur in nature or in manners that contradict the conventional crossbreeding methods.

Genetically modified foodstuffs can be changed so as to have a longer lasting life in the aim of limiting wastage of food. This can be done through creating stronger colors, eliminating seeds or having the plant get more adjusting to harsh climatic changes. A lot of foodstuffs that have been advanced have better nutrient percentages such as protein and calcium.

2. GMOs are easier to cultivate

Genetically modified foods can also be manipulated to grow in specified and problematic surroundings. This could be done through creating crops that are more resistant to pests. They may also be made to have improved tolerance to numerous chemicals such as herbicides. As a result, farmers are able to get improved yields.

3. They boost the yields that an individual can generate on existing lands

GMO produce can be manipulated to give higher produce from the same cultivated lands. In some occurrences, the produce can possibly increase after transitioning to GMO from traditional crops thus making it possible to meet the food demands that the next generations are going to need.

READ  13 Most Beautiful Coral Reefs in the World (With Pictures)

Research shows that by 2050, the world population would have increased to 10 billion. Meaning people will require more food for consumption from the existing lands. In a bid to hold up the anticipated increase, GMOs offers the possibility with no need of altering the pricing of food. GMO proponents claim it is a solution to the world’s future food security.

4. GMOs can be transported to the inaccessible regions of the world

Currently, the food production in the world is 17% more than it is required for the population. The problem is how food can be dispensed to countryside where individuals have little quantities of food. The time it takes for it to reach such areas is sufficient for it to get ruined before consumption.

Therefore, GMOs lengthen the natural life of the foodstuff and its resilience, permitting them to be transported to longer distances without wastage or going bad to communities that really need them.

5. Chemicals usage on GMO crops is lesser compared to other crops.

Based on a study conducted by PG Economics to measure the quantity of pesticide on cotton that had been genetically modified from 1996-2011, it was discovered that there had been a 6% decline in the amount of herbicides used compared to those that had not been modified.

6. According to the FDA, GMO foodstuffs potentially meet equal requisites as other foodstuffs

Stanford University made a comparison of genetically modified foods to organic foods and discovered that there was no compelling proof that either of the foods were more nourishing or more probable to come with added health dangers when consumed by people.

7. GMOs are able to preserve energy, soil and water

This allows our food distribution network to make less of an impact on the environment. Food can be cultivated in regions that have less rainfall and have no irrigation with appropriate genetic alterations. What is more, the crops have a great resistance to weeds, pests, and diseases with a continuous yield, making it easier to plan for food sources and storage for a bigger populace.

8. It protects crops from extinction

A lot of foods people consume nowadays are products of a sole original source. For instance, each naval orange is basically a clone of a single original tree that was attached to create more trees.

Not having genetic disparities puts the crop at risk should a virus or microorganisms be able to attack the fundamental genetic make-up of the crop. For example, the Hawaiian Rainbow Papaya was genetically engineered thus its industry was saved.

1. They might contribute to a rise in allergic reactions

Studies have shown that food-related allergic reactions in kids have risen from 3% to 5% in the last decade. Even though there is no proof supporting the notion that GMOs can cause a rise in allergies, the thought that it may happen has stuck in people’s minds causing them to keep away from genetically modified food.

READ  Is Environmental Management The Right Role For You?

GMOs that had body building nutrients from Brazil nuts were discovered to set off an allergy in individuals who are sensitive to them. Thus, any proteins that come from other foodstuffs must have a listing as part of the components and be tested to find out their capability of causing allergies.

3. GMOs may contribute to antibiotic resistance

4. Some research has linked GMOs to cancer

A research that was initially published in 2013 showed that herbicide found in Round-up tolerant crops led to the development of cancer in rats. The paper was later taken back by the first journal that published it for having unfounded or deceptive information, however, other journals have printed it since the withdrawal. Thus, a lot of individuals have concluded that consumption of the modified corn could be dangerous to their health.

5. Very few companies are in charge of all the GMO seed market

A lot of the negative energy surrounding GMOs has a tendency of involving Monsato. There are other 5 corporations that alongside Monsato are in charge of all the GMO seed market. The companies include DuPont, Sungenta, Agrosciences, Dow, BASF and Bayer.

This implies that a lot of the soya beans and corn are benefiting both the farmers and the companies. To safeguard such revenues, copyrights are required for certain seeds, these has resulted to some legal battles for the farmers that have GMO seeds to cross-pollinate in spite of not cultivating GMOs.

Presently, there are 64 different sorts of weeds that have been verified to be resistant to atrazine. This is regardless of the reality that not any of the weeds have been coupled with GMO crops to promote such a resistance.

Various farmers in the Southeastern United States tend to lose up to half of their produce even when they have planted GMO crops, to atrazine-resistant weeds.

7. Autonomous studies are restricted by organizations in control of GMOs

User concurrence with half of the leading manufacturers of GMO seeds forbid autonomous research of the finished good. It aid in protecting the payments they get to make when farmers get to reap yield through using their seeds.

Because the seeds are seen as the property of the corporation, even unintentional growing of a GMO crop can cause in the necessity to reimburse the company.

8. GMO crops can contaminate other fields

Even though crops have been genetically modified, they still grow the same as other crops. This indicates that pollination is still needed to happen so as the crop can produce the intended “fruit”. For instance, bees play a major role in pollination, meaning they get exposed to the genetic transformations that occur in the crop.

The seeds that are produced can sometimes be extended to other agricultural lands thus contaminating them. When cross-pollination happens, there is no result that can be predicted for both farms, although soybeans are an exemption because they do not cross-pollinate.

When pesticides are applied to pests that threaten growth of crops, a small number of them have a tendency of surviving. Hence, following generation becomes resilient to the chemical meaning either more pesticides are required or stronger one. Putting a stronger chemical, the insects become even more resilient, this eventually leads to the growth of super bugs that decrease food provisions.

10. GMOs have the potential of affecting animal protein

The huge majority of the main plants in the United States that are planted are genetically modified. Such crops are subsequently given to livestock as food. Consequently, this affects animal-based groceries.

GMO components can be traced in eggs, milk, seafood and animal muscle tissues. In addition, honey can also contain components of GMO because of bees pollinating genetically modified plants for production.

Regarding the advantages and the disadvantages of GMOs, as seen, there is a lot of disinformation as there is truth. Even though GMOs are able to produce more food, they tend to cause digestive problems along the way. So it is important to address the treatment of GMO seeds and also farmers should be allowed to use GMO seeds that spread to their farms without fearing lawsuits, this would increase the profits gained from farming. 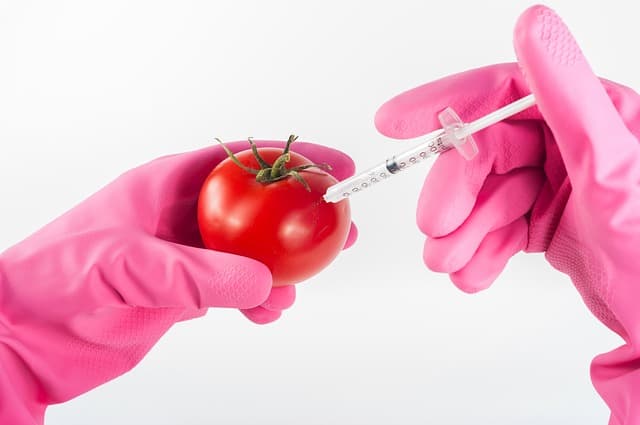