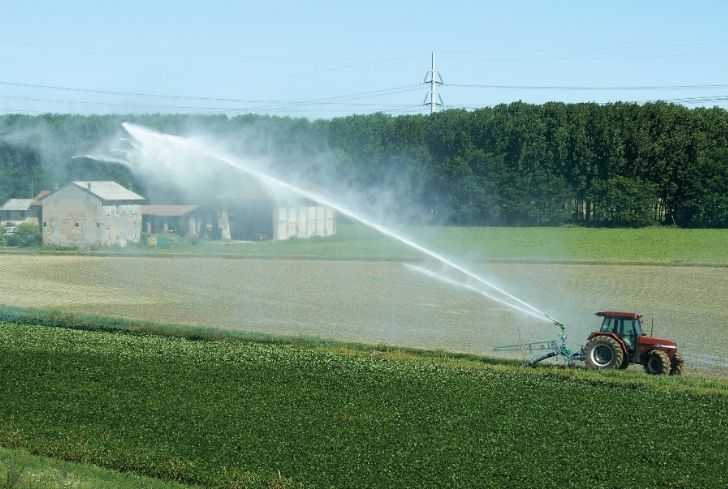 Irrigation is the process of watering crops, pasture, and plants by the use of water, which is supplied through pipes, sprinklers, canals, sprays, pumps and other man-made features, rather than purely relying on rainfall. In other words, it is a method of an advanced watering system for helping plants to grow because it is applied as an alternative to rain-fed farming.

It is also a technique of fulfilling plant or crop water requirements as they need it as an essential resource for growth. At the same time, it aids in providing plants with the nutrients required for development and growth, as well as achieving high yields by enabling the penetration of roots in the dry fields.

Traditionally, water for irrigation can be sourced from dams, lakes, rivers, wells, ponds, reservoirs, canals or tube-wells, among various other sources. However, the time, amount of water required, rate and frequency of watering are dependent on several factors. Some of them include the type of crop, types of soil, and the season.

For instance, crops grown in the summer require a lot more water compared to those grown in the winter. Irrigation is also applied to areas that are geographically not friendly to growing crops, such as dry regions. It helps in growing the plants in areas that would otherwise not support such growth. Having defined irrigation, this article looks at the types, methods, and importance of irrigation.

It is the most common type of irrigation as it simply employs gravity to distribute water over a field by following the contour of the land. In surface irrigation, for example, water will flow downhill from an area of higher elevation, reaching all the crops.

It is only applicable if the area or the land has sufficient water, and is naturally sloped, otherwise, it becomes very labor-intensive. It utilizes the furrow system technique, whereby channels are used to direct water down a slope across a paddock where crops or plants are grown – about 1 meter apart.

The best example is rice paddies grown in East Asia. In those areas, the land is dug into terraces and water flows downhill, allowing each plot of land to be watered.

However, surface irrigation is not suitable for highly sandy soils with high infiltration, as it can lead to uncontrolled water distribution, ultimately resulting in floods and soil erosion. Also, it can only work in areas with an unlimited supply of water.

For localized irrigation, water is distributed under low pressure to each plant. Tubes or a piped network is used throughout the field, delivering water to each plant.

The aim of this type of irrigation is to only wet a small area, typically the root zone of the plant as water is applied just around the base of the plant. The flow rate of the water is also very low, applied regularly and in small amounts either below or above the soil surface.

The application devices used in localized irrigation include nozzles, perforated pipes, small tubes, nozzles, and orifices whereas the main components include pressure and flow regulators, main lines, laterals, filtration system, and distributors. Localized irrigation is touted as highly efficient, up to 90%, owing to its high water saving attribute.

Drip irrigation, also sometimes referred to as trickle irrigation, is a sub-type of localized irrigation, where droplets of water are delivered directly to or near the roots of a plant at a very low flow rate.

It is an effective type of irrigation as it minimizes evaporation and water runoff. It is also very suitable for all types of topography and soils and perfect for areas with limited amounts of water or with high water costs. The pressure needed in drip irrigation is between 0.7 and 1.4 kg/cm2(10 and 20 psi).

As the name suggests, sprinklers are used to irrigate in a way that simulates natural rainfall. The system is operated in a way that ensures water is applied uniformly. Overhead high-pressure sprinklers or guns are used to distribute water from a central location in the field, usually by pumping.

The sprinklers could also be attached to moving platforms. In centre pivot irrigation, for example, sprinklers are attached to wheeled towers, in a circular pattern to spray water overhead the plants and is common in flat areas. Sprinkler irrigation can be used to irrigate lawns, golf courses, crops, and landscapes, and can be used for agricultural, residential, and industrial purposes.

In this type of irrigation, the surface of the soil is not made wet. Instead, the water is fed directly to the ground through capillarity to reduce airborne drift and lessen runoff. This way, the water table is raised making it easier for crops to access the water they require.

It uses buried pipes or tubes or drip tape to provide for the water needs of the crops or plants. Its advantage is that it saves water loss from evaporation and improves crop yields by minimizing the incidences of disease and weeds.

Also known as inundation irrigation, is a type of irrigation where flooded land conditions are intentionally created, thereby making the soil completely saturated. After this process, naturally-occurring rainfall is sufficient for the maturity of the crops.

it is a system of irrigation that relies on a continuous supply of water. A canal distribution system is created, taking off water from a reservoir or weir to the crops.

This is when water is distributed across the land through manual labor and watering cans. It is an ancient method of watering but is still used, especially in developing countries. It is cheap but is very labor-intensive, and its efficiency is poor since there is an uneven distribution of water. Also, there are high chances of water loss.

It is a modern method of irrigation, and it uses sprinklers. A pump is connected to pipes that generate pressure and water is sprinkled through nozzles. They sprinkle water over the crops like raindrops, helping to achieve an even distribution of water. It is efficient and serves best in areas with unlimited water.

The sprinklers can be set permanently, temporarily or can be mounted on a movable platform. In Libya and Saudi Arabia, for example, sprinkler irrigation is by far the most predominant at 100% and 64% respectively.

Unfortunately for the system, the water used has to be safe for animals and people, water distribution can be patchy, weeds get as much water as the crop, and can easily erode soils if the water pools.

3. The Drip or Trickle System

In a drip or trickle system, water is supplied drop by drop, directly to the roots, using a hosepipe. Drip irrigation is considered one of the most efficient methods of irrigation as it focuses the water onto the plant itself.

It is also best suited for areas where there is a shortage of water. Drip irrigation can use any type of water, including recycled and non-potable water, on any type of soil and any climate. It minimizes soil erosion, is energy- and cost-efficient and minimizes the growth of weeds as the water targets the crop itself.

This is where irrigation water is applied below the soil subsurface. It can occur naturally or artificially. For the former, water leaks from the water pipes or channels, moving through the subsoil and irrigating the crops situated nearby.

As for the latter, artificial water channels are provided underground and water is supplied to the crops through capillarity. It is a costly means of irrigation but provides high returns and higher profits.

Irrigation water is diverted from a river to the main canal through the construction of a diversion weir. This is known as direct irrigation, as the water is going directly to the crops. If a dam is constructed and the water is collected and stored, this is referred to as storage irrigation. Direct irrigation is simple and the most economical form of perennial irrigation.

1. Compensating For When There is no Rainfall

Irrigation kicks in when there is insufficient rainfall or when there is uncertainty as to when the rain will fall. Without the rain or irrigation as the alternative, the crops are adversely affected, which can lead to a food shortage or crop/plant failure.

2. Increasing the Amount of Cultivatable or Agriculturally Productive Land

Some areas of the world are dry, naturally. Irrigation has been responsible for turning such lands into cultivatable lands. Today, about 18% of the world’s cropland is now irrigated. Irrigation is also responsible for bringing the most out of fallow lands, which are traditionally left idle after harvest, before the next cultivation season.

The expansion of irrigated land has made desert ecosystems, such as Jordan and Israel, adopt farming to boost food demands without necessarily depending on rain. Such areas use groundwater from wells and aquifers and in doing so, it enables them to meet the world’s demand for food by producing food crops such as cereals, potatoes, and vegetables.

Furthermore, countries and regions that practice top-level and large-scale irrigation, are best known for exporting food, which brings an economic advantage to such a region or country.

Irrigation, by default and in many instances, is employed when rainfall is insufficient. However, it can be applied at any time, even if there is sufficient rainfall to boost crop productivity.

According to a publication by Olayide, Tetteh, and Popoola (2016) on climate-smart agriculture, crop productivity on irrigated land is higher than in the un-irrigated areas, which primarily rely on rainfall.

In most tropical countries, the rainy seasons are specific, making it impossible to grow multiple crops at the same time. Moreover, their water requirements are different, and over-irrigation spoils the crop production. Optimum irrigation makes it possible to grow more than one crop at a time in most areas of a country.

When crops or plants are watered irregularly and with just a mere hosepipe, it is not consistent and they simply get just one pass. This means hard-to-reach areas and those that do not experience steady rainfall may not get sufficient water. A well-designed irrigation system delivers even to hard-to-reach areas of the land by the use of efficient irrigation systems such as drip irrigation.

We cannot control when it will rain. If it rains during the day, and it gets a bit warm, evaporation rates will be high, meaning the crops and the soil will not consume enough water.

Irrigation systems can be set in such a way that they sprinkle water early in the morning or at night when evaporation levels are low. This, not only saves on the water used, but also maximizes the moisture required by the crops, flowers, or even the soil itself.

Irrigation ensures food production continues, regardless of the season or climatic condition. This means there are continuous income and employment, thereby reducing poverty. The substantial increase in income achieved through irrigation means the economy can continue to thrive. This is also achieved by the export of food to other regions or countries.

Arjun, N. (n.d.). What is Irrigation? What are the Types of Irrigation?. The Constructor. Retrieved from https://theconstructor.org/water-resources/irrigation-definition-types/37463/

“Irrigation vs. Rain-Fed Agriculture”. (2016). Centers for Disease Control and Prevention. Retrieved from https://www.cdc.gov/healthywater/other/agricultural/types.html

“The main types of irrigation”. (2018). Farmer’s Weekly. Retrieved from https://www.farmersweekly.co.za/farm-basics/how-to-crop/main-types-irrigation/