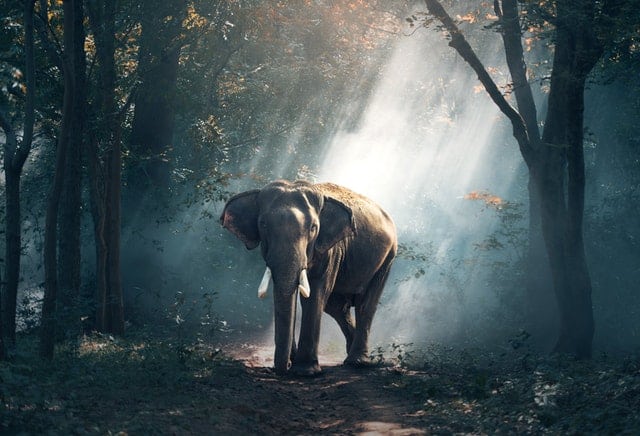 Human activities like agriculture expansion, logging, and poaching are usually the biggest causes of flora and fauna extinction and biodiversity loss.

Over the last four decades, human activities have greatly pushed some animal species to near extinction with an estimated loss of about 10,000 species per year accounting for losing half of the world’s wildlife population.

For example, poachers are to blame for putting some horned animals like rhinoceros and elephants to near extinction in Africa, with a good example being the white rhinoceros in Kenya.

Other factors, such as climate change causing frequent droughts and flooding, deforestation, overpopulation, and consumer culture, are also to blame for endangering wildlife species.

In a bid to counteract this, wildlife conservation is mandatory as it comes with numerous benefits for both animals and humans, including:

Only when the last of the animals’ horns, tusks, skin and bones have been sold, will mankind realize that money can never buy back our wildlife

16 Convincing Reasons Why it is Important to Conserve Wildlife Today

Since they depend on nectar from flowers, they are vital in crop production, inter-cropping, and promoting the continuity of native plant species. By moving from one flower to another in search of nectar, bees carry pollen by sustaining the process of crop growth.

Although plants are the major sources of medications, some animals are also vital in the production of medications. For example, the venom from cobra is an important ingredient in making medications for leprosy while lobsters can be used as antifungals.

It is also worth noting conserving wildlife also means conserving their natural habitats, including trees and vegetation, which is paramount for medicinal research and the sustainability of the pharmaceutical industries.

Watching animals in their natural habitat is not only fun but also relaxing. People always go for holidays in areas under conservation such as zoos, game parks, lakes, oceans, forests, and mountains for activities such as camping, fishing, boat riding, and hiking, just to mention a few.

It has been reported that people who spend most of their time outdoors whether hunting, watching wild animals, or taking a walk or a ride in natural habitats, are less likely to suffer from stress and stress-related complications. Conserving wildlife means that people can continue enjoying nature at its best!

4. It is fun and entertaining!

People spend hours on their television watching wild animals’ documentaries as their source of fun and entertainment. Failing to conserve wildlife and their habitat will mean that there will be no more animal documentation and thus, lack of entertainment.

Furthermore, watching animals in their natural habitat, for example, watching predators make a kill in the jungle, is highly enthralling.

Conserving wildlife means conserving heritage and traditional culture. Some places are known for their flora and fauna in relation to the native practices and ways of livelihood, which means that failing to conserve the environment will lead to loss of their land and native heritage.

For example, big cats like lions, leopards, cheetahs, and huge herbivores like elephants and giraffes are often associated with Africa Safaris that has lately been coined as “magical Africa.” Another example is the scenery of thousands of wild beasts’ migration, which is associated with the “Serengeti Plain” ecosystem.

The reason why most people choose to visit a certain country over others is basically due to the country’s fauna and flora, as well as natural habitats such as forests, mountains, and water bodies.

Countries with the largest portion of wild animals are known to attract a bigger number of tourists, which is the case in regions such as the Amazon and countries such as Tanzania, Costa Rica, Kenya, Brazil, Thailand, and South Africa.

When choosing destinations, tourists have a tendency to choose places where they will see many wildlife animals.

7. Protection of biodiversity and endangered species

In the jungle, a lot of animals depend on each other through food chains and food webs. For example, carnivore animals like lions, cheetahs, and leopards depend on herbivores like antelopes for their survival. If antelopes become extinct in the jungle, the effect can be detrimental to the survival of the cats.

It will also affect the survival of other herbivores in the jungle, as the cats will depend on the remaining animals for their survival, which can greatly reduce the population of big animals like giraffes, which take longer to recreate.

It is also worth noting that the extinction of cats can greatly affect the population of scavengers that depend on cats for their meal and reduce the population of grass and trees eaten by primary consumers such as dear and antelopes.

Conserving fauna and flora encourages ecological stability and balance in the world. The plants, for example, play an important role in ensuring a healthy ecosystem by balancing carbon dioxide and oxygen in the environment.

If animal species become dominant, whether it is humans or wildlife, it will cause a lot of instability, affecting the survival of all plant and animal species in the world.

For example, if humans fail to conserve wildlife and natural habitats, it would lead to the destruction of water supply sources causing droughts and dissertations.

What is more, uncontrolled human activities like deforestation and logging are known to cause negative effects on the environment, and thus, conserving wildlife means protecting ecological stability and balance.

Among the most fundamental roles of wildlife conservation to humans is to enhance food security. By protecting natural habitats from degradation and forests against deforestation, the availability of a variety of food products would rise.

Studying wildlife and its habitat is an important learning experience for children, students, and scholars of all ages. Watching animals helps children to conceptualize ideas and develop their imagination, which is important for their growth.

In fact, taking children to zoos and game parks is part of the education system and as such, failure to conserve wildlife will leave teachers with fewer educational resources in biology and science subjects.

11. Important for the identification of new plant and animal species for research

Despite the increased animal research over the last decades, it is estimated that a significant number of animals and plants are not yet discovered. When one puts into consideration the fact that most human medications came from microbial organisms, animals, and plants, it highlights the need to conserve wildlife and its habitats.

In fact, some researchers believe that the medications for some of incurable diseases will most likely come from animals or plants that are yet to be discovered and hence the need to conserve natural habitats.

Tourism heavily contributes to the economic growth in countries (the GDP of the nation) because of the wildlife conservation centers and their preserved natural habitats. For example, in countries like Thailand, Costa Rica, Brazil, Australia, Kenya, Tanzania, and South Africa, greatly benefit from tourism earnings.

The tourism sector is recorded to account for 10.4% of the world’s GDP. This means that if wild animals are not conserved, it will not only endanger the survival of those animals but it would also result in major tourism-related economic losses.

Wildlife has helped create thousands of jobs both directly and indirectly. For example, in places where there are wild animals, whether it is a zoo or a game park, it is common to find people working in those areas.

There are also people employed to take care of the animals and there are also other professionals such as journalists who play the role of reporting and developing documentaries about the life and nature of different wildlife species.

Furthermore, wildlife and tourism go hand in hand, which explains the reason why most hotels are strategically located within a short distance to a park.

This means that the jobs of those working in such hotels and wildlife-related professionalism would end if proper measures are not put in place to conserve wildlife and their habitats.

14. Protects the livelihoods and knowledge of indigenous people

The people living around the forest areas and natural ecosystems such as lakes and rivers always depend on these resources for their livelihoods such as harvesting timber and firewood for construction and cooking respectively fish for survival, and traditional medicines, fruits, vegetables, and food for survival.

For instance, the survival of the indigenous people of the Amazon rainforest depends on the region’s wildlife conservation efforts.

15. It serves as a preserve for future generations

If conservation measures are not put in place, future generations will not have a chance to see some of the wild animals that exist today.

So many wild animals are reducing at an alarming rate due to human activities and several such as the Amur leopard, Cross River gorilla, Black and Javan rhinoceros, Hawksbill turtle, South China tiger, pangolin, and Sumatran elephant are in the verge of extinction.

Despite the advanced technology, scientists have been trying to impregnate the female rhinoceros with no success, which highlights the need to conserve wildlife as humans will find it difficult to take up the natural role of wildlife.

For the sake of human health, it is crucial to protect wildlife and their habitat.
There are fewer cases of malaria and Lyme disease in diverse, protected natural regions, according to research.

Animals are the source of 60% of infectious diseases, including COVID-19.
The likelihood of diseases spreading and “jumping” species increases when people are close to animals.

Humans and wildlife don’t have to coexist in such close proximity if ecosystems are protected.