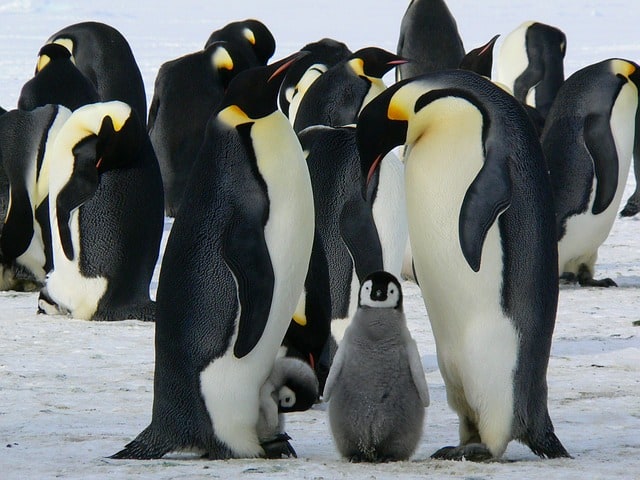 The colony of emperor penguins, the second-largest in the world has “now all but disappeared” according to the researchers. The changes in the conditions of the sea-ice made their typical breeding icy platform highly unstable, and the colony has suffered from an almost total breeding failure to raise chicks in the last three years.

The Halley Bay colony was the world’s second-largest until now with the breeding pair’s number varying from14,000 to 25,000 each year which constituted around 5%-9% of the population of the emperor penguin globally.

The study published in the Antarctic Science journal by a team of researchers from the British Antarctic Survey (BAS) on Thursday. In a statement, the group said that they studied “very high-resolution satellite imagery to reveal the unusual findings.”

The research disclosed that as per the satellite imagery, the emperor penguin colony at Halley Bay in Antarctica decreased drastically over the last three years due to failures in breeding from acute changes in the conditions of the local environment.

A stable icy platform is what is required by the Emperor penguins to breed, and that must last from April to December, i.e., from the arrival of the birds till their chicks fledge. However, the fast ice broke up early in the ice creeks. The initial breakup started with the stormy period in September 2015 that witnessed the strongest El Niño in the last 60 years. The other reasons were strong winds and a record low local sea-ice year.

“For the last 60 years the sea-ice conditions in the Halley Bay site have been stable and reliable,” the team said. “But in 2016, after a period of abnormally stormy weather, the sea-ice broke up in October, well before any emperor chicks would have fledged.”

The pattern of the conditions repeated in the following two years, leading to “the death of almost all the chicks at the site each season,” the group said.

“The colony at Halley Bay colony has now all but disappeared, whilst the nearby Dawson Lambton colony has markedly increased in size, indicating that many of the adult emperors have moved there, seeking better breeding grounds as environmental conditions have changed,” the researchers said.

The relocation of the birds to a more stable ground for breeding is encouraging. However, it is yet to know whether the penguins would seek alternative locations in response to the changes in their local environment.

The team has been tracking the penguin’s population at the Halley Bay colony and other colonies nearby for years with the help of very high-resolution satellite imagery, said Peter Fretwell, a remote sensing specialist at BAS and the lead author of the report.

“These images have clearly shown the catastrophic breeding failure at this site over the last three years,” Fretwell said. “Our specialized satellite image analysis can detect individuals and penguin huddles, so we can estimate the population based on the known density of the groups to give a reliable estimate of colony size.”

According to the Phil Trathan, a penguin expert with BAS who co-authored the report, “it is impossible to say whether the changes in sea-ice conditions at Halley Bay are specifically related to climate change, but such a complete failure to breed successfully is unprecedented at this site.”

“Even taking into account levels of ecological uncertainty, published models suggest that emperor penguins numbers are set to fall dramatically,” he said, adding that the penguins are likely to lose 50% to 70% “of their numbers before the end of this century as sea-ice conditions change as a result of climate change.”

The researchers will continue to study the response of the colony to the changing conditions of sea-ice helping other scientists to gather “vital information about how this iconic species might cope with future environmental change.”