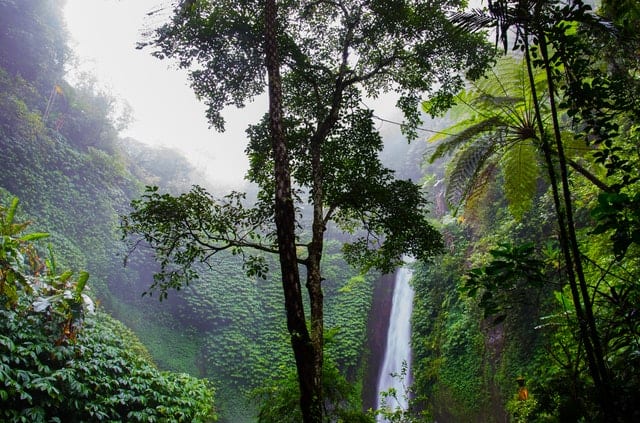 The Amazon Rainforest, also known as Amazonia, is located in South America and is the world’s largest tropical rainforest covering an area of 5,500,000 km2. Due to its large size, the Amazon forest covers a territory of nine nations with the biggest part of it in Brazil. The climate within the region is mainly tropical with hot, humid, and very wet conditions.

The rainforest ecosystem is critically important for the well-being of the planet because it plays a highly significant role in stabilizing the world’s climate. The Amazon forest also provides a home to many plants and animals and for this reason, it qualifies as a major tourist destination for the lovers of nature. These are just a few of the many facts about the Amazon Rainforest. Below are more than 25+ spectacular facts about the Amazon Rainforest.

The forest is a peculiar organism of unlimited kindness and benevolence that makes no demands for its sustenance and extends generously the products of its life and activity; it affords protection to all beings

25+ Spectacular Facts About the Amazon Rainforest

Fact 1: The Amazon rainforest covers over half of the world’s remaining rainforest

Amazon is the world’s largest tropical rainforest. Only 6% of the earth’s surface is covered by the rainforests and out of this, the Amazon rainforest covers over half of the world’s remaining rainforests.

Fact 2: It is located in a territory of nine countries

Amazon is located in a territory of nine nations including Brazil, Peru, Colombia, Venezuela, Ecuador, Bolivia, Guyana, Suriname, and French Guiana. Brazil takes the largest share of the rainforest, about 60%, while roughly 13% of it is in Peru and 10% of it is in Colombia.

Fact 3: Amazon has a rich ecosystem

Amazon is virtually unrivaled in the scale and complexity of animal and plant species. It houses at least 10% of the world’s known biodiversity and is the home ground of more than 16,000 different species of trees, 2.5 million insect species, 40,000 plant species, 2,200 fish species, 1,300 bird species, 427 mammals, 430 amphibian species and 380 reptile species which have been classified just within the region.

Fact 4: Interestingly, a European by the name Francisco de Orellana is named after the Amazon for navigating the entire Amazon River

He gained recognition as the first explorer to traverse the Amazon River within the Amazon rainforest.

Fact 5: Deforestation is extensive in the rainforest

On aerial view, the Amazon rainforest is depleting at an astonishing rate because of extensive deforestation. Experts postulate that in the next forty years, the rainforest will be completely lost especially if action is not taken to address the problem. The rainforest is disappearing at a rate of 1.5 acres every second. The main reason for deforestation in the area is to clear the forest for cattle grazing and crop production.

Fact 6: A quarter of the western medicine pharmaceuticals used today has rainforest based ingredients that originate from the Amazon rainforest

Currently, over 120 drugs come from plant-derived sources and 70% of the plants identified as active against cancer cells come from the rainforest. It is even believed that the cure for cancer may be found in the Amazon rainforest.

Fact 7: Amazon trees and plants provide 6-9% of the world’s oxygen

Considering the large size of the rainforest, it generates 6-9 % of the globe’s oxygen and perhaps the reason it is known as the “lungs of the planet”. The vegetation in the Amazon continuously draws in and recycles carbon dioxide into oxygen and releasing it into the atmosphere, acting as a giant air machine.

Fact 8: There are about 50 indigenous tribes with their own language and culture living in the Amazon rainforest

The more than 50 indigenous communities in the Amazon have also never made contact with anyone outside the rainforest. Brazil’s Amazon is said to host the majority of the indigenous tribes. Most of the tribes are not settled in a specific location but rather move from one location to another often. They are nomadic hunters and gatherers.

Fact 9: The rainforest is home to very many dangerous animals

From poisonous reptiles to predatory creatures, the Amazon rainforest hosts numerous dangerous creatures. In fact, some of the creatures, like the poison dart frog has enough venom that can kill up to 10 humans. The eight most dangerous Amazonian rainforest animals are the Green Anaconda, Poison dart frog, Brazilian wandering spider, the Jaguar, Electric Eel, South American Rattlesnake, Bullet Ant, and the Red Bellied piranhas.

Fact 10: There are hundreds of endangered and threatened species of Amazon wildlife

About 137 species of the plants, animals, and insects become extinct every day through forces of destruction such as logging and cattle ranching, which have contributed to the loss of many acres of the rainforest. In the present day, anthropogenic activities in the Amazon rainforest threaten numerous species that at the verge of extinction.

In 2005 and 2010, the Amazon rainforest experienced a significant drop in rainfall causing the Rio Negro Tributary to fall to its lowest level on record and the release of greenhouse gases from the deadwood. The drought also resulted in very low stream flows and increased frequency of forest fires.

Fact 12: The Amazon River is the world’s largest river by volume

The Amazon rainforest hosts the Amazon River, which is the largest by volume and the second-longest in length globally. The river has 17 tributaries draining 55 million gallons of water per second into the Atlantic Ocean, making it the largest in the quantity of water that it transports.

Fact 13: The floor of the Amazon forest is completely dark

The broad-leafy canopies of the Amazon trees block most of the sunlight. Only 1% of the light makes it to the floor. The broad-leaf canopies also slow down rainwater, making it take up to ten minutes to reach the ground.

Fact 14: One in five of all bird and fish species live in the Amazon

Fact 15: Agricultural activities are not sustainable in the rainforest

The region most has infertile soils that cannot support crops for a long period of time. It is the reason those living in the rainforest have to move often. The soils are notoriously thin and poor in nutrients. Surprisingly, rich rainforests grow on the soils even though they are low in mineral content.

A long time ago, the river once flowed east-to-west, but due to the continental drift, it created a raised highland along the east coast of South America, which tilted the Amazon flow, sending water and sediments rushing towards the center of the continent.

Fact 17: The toucan is the loudest creature in the Amazon

It is a brilliantly colored arboreal fruit-eating bird, which aids to give it camouflage in the tropical rainforest.

Fact 18: A three degrees rise in temperature will destroy 75% of the Amazon rainforest

Climate change experts warn that global temperature increases will kill the rainforest within 100 years. The impacts of the temperature rise cannot be seen now but it will surely affect the rainforests in years to come.

Fact 19: The Amazon depends on a continuous supply of dust containing phosphorous for fertilization

The phosphorus dust is blown from the Sahara Desert over the Atlantic Ocean by the wind. Strong winds sweeping across the Sahara help in the process. Phosphorous is an essential nutrient that acts like a fertilizer that the Amazon depends on to flourish.

Fact 20: Martin Strel holds the Guinness World Record for swimming the entire length of 5,268 m of the Amazon River for 66 days

He was the first man to swim the entire length of the Amazon River from headwaters in Peru to the Brazilian port city of Belem.

Fact 21: Efforts to curb deforestation in the Amazon have been difficult

Actions to address the deforestation problem have been difficult over the years until recently when laws and stricter policies were put in place to protect the forest from deforestation. Conservation policies, improved law enforcement, and new protected areas have played a significant role.

Fact 22: In the past years, the Amazon has suffered a loss of approximately 20% of its size due to the cutting down of trees

All of it started with the controversial Trans-Amazonian Highway, which created room logging and more destructive actions such as illegal hunting of wildlife and clearing of interior forest areas for farming and settling squatters.

Fact 23: The Kapok tree is the tallest in the Amazon

The tree can grow to lengths of 200 ft towering over the other rainforest vegetation.

Fact 24: More than 80% of the types of food the globe consumes have its origin in the Amazon rainforest

More than 3000 fruit types that grow in the rainforest are edible. They include avocados, coconuts, oranges, lemons, grapefruits, pineapples, and mangoes. A variety of vegetables and spices were also originally found in the rainforest.

Fact 25: The biodiversity of plant species in the Amazon is the greatest in the world

Every one hectare (2.47acres) contains 750 types of tree species and 1500 types of plant species.

Fact 26: The Amazon rainforest acts as a carbon sink

Because of its vastness, the Amazon rainforest absorbs and stores carbon dioxide. The rainforest, therefore, plays a crucial role in maintaining global carbon levels.