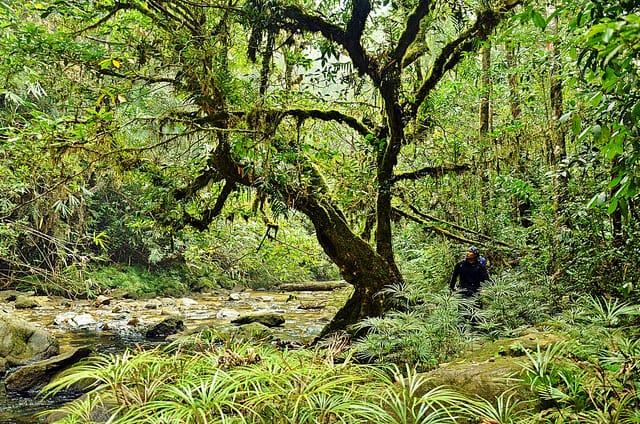 The rainforest has a variety of different types of plants, many of which cannot be found anywhere else in the world. The tropical rainforests are usually found in the Central and South American regions, and their plants are split up into four different types. While the rainforests cover only about 8 percent of the actual earth, they are home to more than half of the plants and animals that live on the earth.

The most prevalent type of plant that is found in the tropical rainforest is the tree. Trees make up nearly two thirds of the rainforest plants that grow in the Amazon, based on research that has been conducted by the Rainforest Conservation Fund. There are larger trees, like the big leaf majogany, and it is actually 200 feet tall and can live to be 350 years old. It is deep in a reddish color, and it is used to make a lot of different types of furniture. You will also find Brazil nut trees, which drop huge fruits around the beginning of each year. Their fruits are really large, and they can be produced only in Brazil.

From the Amazon in South America to the Daintree in Australia to the Harapan in Indonesia, tropical rainforests are truly some of the most overlooked and truly spectacular and diverse places on Earth. It is also estimated that rainforests contain more than half of the fauna species on our planet. And yet deforestation of rainforests, especially of the Amazon, for human development and settlement threaten the millions of species that thrive in this unique world.

The roots of Buttress Roots suffers from leaching and poor quality of nutrients. This is the reason that they grow laterally rather than vertically in search of nutrients and thus form a dense network on the surface of the ground. Since the roots are long and wide, the trees get larger area for water intake. The buttress roots therefore help trees to maintain stability when they reach towering heights and also during thunderstorms.

See also  What are the Major Biomes of the World?

Next, take a closer look at bromeliads. There are over 2500 different types of species of bromeliads that exist in the tropical rainforest. One of the most popular is the pineapple. Most of the bromeliads that are found are actually found in the stiff leaves that can overlap in the top of the rainforest, that help to hold in all of the rain and keep it in the environment. Most of these plants produce colorful flowers, including red, orange, blue and purple flowers.

The leaves of plants have adapted to cope with exceptionally high rainfall and make use of their elongated tips to shed off the water as soon it drops on them. This is needed to protect them from fungal and bacteria growth which is common in a wet and damp environment and to keep their surface clean.

Then, you will find epiphytes. This type of plant is actually the type that doesn’t really ever touch soil. They are mainly found on the trees, and they get all of their nutrients from the trees. They include the orchids and ferns that are found in the upper canopy of the rainforest. They rely on insects and certain types of birds to pollinate and spread. Most of the orchids that grow in the rainforest will start out really tiny, and then they can grow to be as tall as about 14 feet, sometimes even more! Since they don’t use a root system, they have to get their nutrients from the fungi that grow at their roots. This is also how they get their water.

A thick bark helps to limit moisture evaporation from the tree’s trunk. Since this is not a concern in the high humidity of tropical rainforests, most trees have a thin, smooth bark. The smoothness of the bark may also make it difficult for other plants to grow on their surface.

Finally, you will find lianas in the rainforest. These are much like vines, and make up just about 8 percent of the total plant life in the tropical rainforest. These woody plants actually get their sunlight through various different techniques. They have roots, tendrils, hooks, thorns and twigs that can be used to climb up the trees in the rainforest so that they can get the sunlight that they need in order to thrive. They work to help stabilize the trees of the rainforest as well. One of the most common types is the rattan vine, and it is collected from the rainforests in Southeast Asia to help make furniture. It has been used so much that it is now an endangered plant, meaning that you can’t really find it that much anymore.

Prop and Stilt Roots can grow as long as 28 inches a month. Prop and stilt roots help give support and are characteristic of tropical palms growing in shallow, wet soils.

Bengal Bamboo grows extensively in the Southeast Asian Rainforests, especially on the islands of Indonesia. Growing in patches in the undergrowth of the forests, this green colored plant it can grow up to a whopping eighty feet in height and three inches in diameter, and can live up to forty years. It adapts well to its environment and does well in both long periods of rain and sunlight.

Perhaps the most “classic” tree that comes to mind when we think of jungle, be it a rainforest or a faraway Pacific Island, Coconut Trees are a symbol of the tropics. They can grow to be up to eighty feet in height and leaves those themselves can measure to be more than fifteen feet. The main attractions to Coconut Trees are the shade they produce in the hot weather and their coconuts, which can number up to fifty per tree.

We all know what bananas are, but what most of us don’t know is that they grow on giant trees in the tropics and can take up to a year to fully ripen. Bananas are found all over in South America, Africa, and Asia.

Yes, coffee also grows in the tropical rainforests. You just might have to think the rainforest for the beverage that keeps you awake in the morning and the long work hours. Coffee has a life expectancy of one hundred years, eight years of that which is the plant growing into production.

Mangrove trees are unique because they are found where rainforests meet Oceans. As a result, they are most commonly found on deltas and along coastlines. They are actually there to protect the coastline from the rainforest by collecting sedimentary rocks from the rivers to slow down the current of the water. Since mangroves are found along the Oceanic coasts, they can survive in extremely salty waters; however, mangrove forests are also unfortunately among the most threatened natural habitats on the Earth.

The tallest tree of the Amazon Rainforest, the Brazilian Nut Tree stands an astonishing one hundred and sixty feet tall. This tree is known as the producer of the Brazilian nut, which is found inside fruit that weight more than five pounds. Contrary to the name, the Brazilian nut tree is not just found in Brazil. It is also common in Ecuador, Peru, Columbia and Venezuela.

Though not quite as tall as the Brazilian Nut Tree, Kapok Trees are still a beautiful and towering addition to the rainforests of the Amazon, Africa and Southeast Asia. Widely spread throughout the rainforests of the world, the Kapok Tree is important to any rainforest’s ecosystem as they are used as shelters for various animals like monkeys, frogs and birds, and rising above the canopy line to allow animals to move from tree to tree without reaching the ground. However, the timber of Kapok Trees is also particularly valued for their usefulness in constructing boats and canoes.

Not only are Orchids the largest family of plants in the world, they are also beautiful and appear in every color. The plants themselves are large, with the stems of the flowers growing to be nearly fifteen feet long and the petals thirty inches. They are found primarily in the rainforests in Central and South America.

Cacao plants come from an evergreen tree that produce pods containing up to sixty cocoa beans, which can then be turned into divine, highly in demand chocolate. Cacao trees are primarily found in the Amazon rainforest of South America.

When we preserve the rainforests, we can actually keep these plants thriving. It is something to consider, especially when you take into consideration the fact that much of the rainforests in the world are actually be cut down faster than you would like to realize. You may not even know, but we lose miles and miles of rainforests each and every day. This is really not a good situation for the many plants that depend on the rainforest to live.