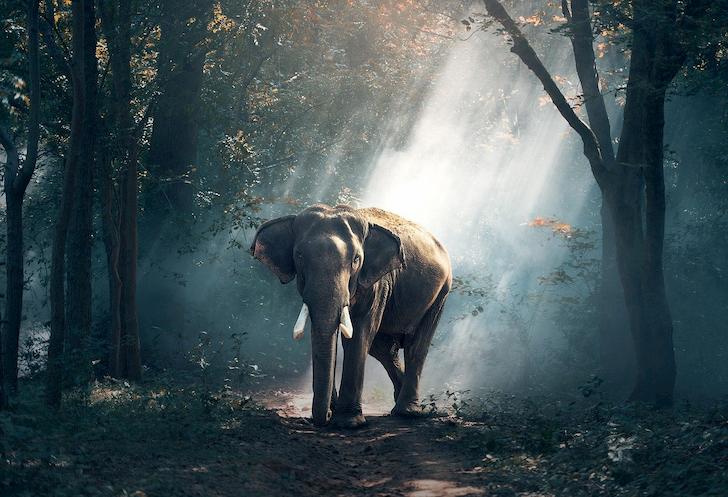 The elephant is the largest land animal in existence today. Elephants are distinct for having long tusks, large ears, big legs, and tough and sensitive skin. However, the features are different depending on the species of the elephant. Today, there are three existing species, the African bush, the African forest, and the Asian elephant. The African variety has larger ears and more concave backs, while the Asian counterparts have smaller ears and level backs.

Despite its significant size, the African elephant is vulnerable while the Asian one is considered endangered by the International Union for Conservation of Nature (IUCN). Here are more facts about elephants.

This article describes why elephants are endangered, where they live, why they are important for the wildlife, threats to elephant species, and how to save them from extinction.

Where Do Elephants Live?

Elephants, particularly the African bush elephants, are native to over 35 countries in Africa. Just over 400,000 elephants are remaining in the world today, making them endangered and vulnerable. Elephants love any habitat that has a lot of food and water. It is for that reason that they are scattered all over sub-Saharan Africa’s savannas.

Their Asian counterparts are found mainly in Nepal, Southeast Asia, and India, in rain forests and scrub forests. They often live in family groups where multiple families come together to socialize. The females live in family groups which can include at least one female and her calves and other related females with their offspring. Such groups are often without the company of the males and are led by a matriarch, which is the oldest of them all.

The African bush elephant is predominant in dry savannahs, marshes, lakeshores, and deserts, as well as in elevations from sea level to mountain areas above the snow line. The African forest elephant lives mainly in equatorial forests and can also be seen in ecotones and gallery forests which are between forests and savannahs.

Lastly, the Asian elephant lives in an area with a mix of grasses, trees, and low woody plants, primarily in dry thorn-scrub forests of Sri Lanka and south India and the evergreen forests in the Malayan peninsula.

Why are Elephants Important For the Wildlife?

1. They modify the ecosystem

Elephants are the largest land mammals. As a result, they play a vital role in balancing the ecosystem. They create clearings in forests by trampling and encouraging other plants to grow. The clearance allows for more light to reach the forest floors and as such, lower-lying plants have a chance to grow.

2. They help other animals feed

Due to their size, they can trample forests and dense grasslands, making way for smaller species to feed and co-exist. Also, their dung is collected by dung beetles, which store it as food resources for their larvae. Honey badgers subsequently feed on the dung beetle larvae.

3. They help other animals drink water

They are also responsible for creating water holes that can be used by other animals to dig dry riverbeds whenever the rainfall is low. They create the holes using their trunks, tusks, and feet. As a result, other animals can drink water collected in the holes.

4. They help in the growth of new plants

Elephants travel over vast rangelands. As a result, they will disperse seeds in their dung all over the land, helping generate new plants. The manure is also an excellent fertilizer that allows the seeds to germinate and grow. Such dispersal is proper for it will enable plants to colonize new areas.

Elephants are some of the animals that make tourists visit the countries in which they are native. In fact, the majority of the income generated in sub-Saharan Africa comes from European and American tourists who tour the countries to witness these majestic creatures, among others.

Various Threats to the Elephant Species

To be classified as endangered, the elephant has faced several threats. The primary one is the poaching crisis. Over 35,000 elephants are killed each year for their tusks by illegal poachers. They kill the animals for the ivory and leaves the body to rot.

The second most significant threat is the fact that their natural growth rate is yet to overtake the rate of killings. It means for every elephant that is born; there is more than one killed. Additionally, it takes almost two years for a pregnant elephant to give birth. Within that period, about 70,000 will have been killed.

The third most significant threat is retaliatory attacks by farmers and human settlers. The human population continues to grow, and with that, the demand for more settlement and farm areas. They, in turn, venture into territories, ought to be for elephants and other animals. Also, the elephant might eat crops grown by the farmers, and in turn, the farmers will kill the elephants to protect their plants.

Human land use and climate change have degraded wildlands and broken up elephant habitats impeding migratory corridors. It is, therefore, putting the species at risk of extinction, potentially jeopardizing the ecosystem upon which the animal depends.

Why are Elephants Considered as Endangered Species?

They are poached with poachers only going for their ivory tusks. The tusks are sold for unbelievably high amounts of money, making the unlawful business so enticing. Since the poachers have no other interest in the body of the animal, it is left there to rot.

An estimated 35,000 elephants are killed every year for their tusks, and the rate of growth in their population is now less than the rate of their killings. It is a sad scene that has been witnessed in so many parts of Africa, mainly, which are dangerously bringing the animal close to extinction.

2. Destruction of their habitat

The natural habitats for elephants are progressively being damaged or wiped out altogether. As a result, they are not able to freely roam as they once did to find the amounts of food they need daily.

The majority of them are therefore starving to death. As their habitats continue to be destroyed, they end up fighting for little amounts of food that are currently available to them. Although elephants can travel long distances to find food, without enough of it, they will become weak, be unable to move and die of hunger.

In many parts of the world, elephants are highly valued. However, to farmers, they represent destruction to their crops, fruits, and other items of value to them. It is, therefore, possible that the farmers kill the elephants so that they do not destroy crops.

Additionally, females don’t mate before they attain 14 years, and it is possible to have them killed before they reach such an age. The males, on the other hand, are about 40 or 50 years old by the time they are mating.

How to Save the Elephant From Extinction?

Everyone does not entirely understand the plight facing the elephants. As a result, their numbers will continue to go down without much intervention. If awareness is created, everyone will become more vigilant and tough on protecting today’s elephants.

2. End the demand for ivory

Elephants are primarily hunted for their ivory tusks. Raising awareness about the same and subsequently becoming serious with ending the trade of ivory will stop the poaching. If this is achieved, healthy elephants will be able to mate and produce strong offspring.

All nations, especially those that boast of an elephant population, should make it illegal to trade in ivory and other elephant parts. At the same time, China, which is the largest consumer of the ivory, should ban the trade, ending the poaching and illegal trade in wildlife products.

3. Empower members of the community

Farmers and persons living next to elephant habitats ought to be taught how to live with the elephants, or at least how to protect themselves and their produces from being destroyed by the massive animal. Wildlife scouts should also be increased to man the borders, ending the hostility between the people and the animal. This will reduce the retaliatory killings that lower the elephant population.

4. Give the elephants room to roam

As already mentioned, elephants travel quite a long distance, sometimes from one national park to the other. Governments, communities, and individuals ought to set aside enough land for wildlife use, giving the animals enough area to roam around. It will eliminate the problem of habitat loss and the chances of the animals being killed in retaliation.

5. Donate to organizations that are helping in the fight

Another way of saving the animal is by contributing to organizations that are helping in the fight to save the elephant. It could be financially, with resources, workforce and even time. A massive chunk of the money they collect goes towards projects that will save the elephant, educate children and communities around their habitats, and purchasing more land for the animals to roam around.

Each country, territory, or state should enact laws that ban the trade of animal parts. Moreover, the legislation should heavily punish perpetrators and poachers who contribute to the destruction of the elephant and other endangered animals. The people should also back up such legislation and be the ambassadors of the endangered species.