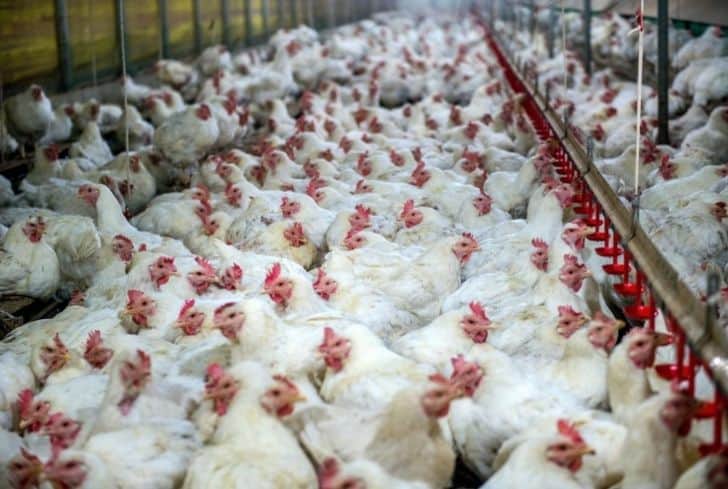 Factory farming is a method of raising animals indoors, which has been classified by many as unsustainable, due to its cruelty and how it concentrates animals into confined spaces. It focuses on profits and not on the welfare of the animals or the environment. Also referred to as industrial livestock production or intensive animal farming, factory farming is an intensive agricultural method of farming animals, designed to maximize production, while minimizing costs.

About 99% of the nearly 10 billion animals slaughtered for human consumption every year are raised on factory farms, which maximizes agribusiness profits at the expense of the animals, public health, the environment and social justice. Here are more details on factory farming:

1. 1492: Christopher Columbus and other European colonists land in the Americas and bring with them eight pigs, 25 horses and other animal species.

3. 17th century: The British Agricultural Revolution centers on a crop rotation system that increases productivity and makes it possible to produce larger numbers of animals

5. 1906: Author Upton Sinclair publishes The Jungle, exposing the dangerous working conditions for laborers and cruelty towards animals in the industry. The public becomes infuriated, while his work continues to point out the extremely unsanitary practices involved

6. 1930: Public outcry over food safety starting in 1906, leads to the passage of the Federal Meat Inspection Act and Pure Food and Drug Act, that mandate the inspection of food products and animals used for the food.

7. The late 1930s: Antibiotics have been discovered and the ability to drastically reduce the spread of diseases in farmed animals leads to exponentially high produces

8. The 1930s to 1960s: The US endorses industrialized farming as a means of production. New technologies intensify agriculture

9. The 1990s: By now, American farms have doubled in size on average, and the number of farms has halved. Many small farms are left with fewer animals and thousands of animals are packed in larger farms. The sector went on from employing 47% of the US population to just 2%

10. 2009: The swine flu (H1N1) pandemic kills hundreds of thousands of animals and people. A decade before, US factory farms had identified the virus and circulated throughout pig farms over the f2000s, before eventually jumping to humans.

11. The 2010s: Factory farming in the US is represented by up to 99% of animal agriculture. Before the decade ends, animals slaughtered near 10 billion.

12. 2020: Advocacy against factory farming continues to mobilize rural communities, workers, environmentalists, the public health sector and the public in general. Legal and structural changes continue to be advocated for, including models for a community-centered, plant-based food system as well as an end to all animal agriculture.

Factory farming is responsible for over 37% of methane and 64% of ammonia emissions, which contributes to acid rain. Methane has a global warming potential more than 20 times that of carbon dioxide. Factory farming also produces harmful compounds like hydrogen sulfide, which adversely affect human beings

According to Good (2018), over 260 million acres of forests have been cleared in the United States alone to make room for crop fields that are used primarily to grow livestock feeds. The same practice has also led to about 3 million acres of rainforest being destroyed. Unfortunately, these numbers are only growing and more forests are being killed, for factory farming. Deforestation for animal grazing and feed crops emits approximately 4 billion tons of carbon dioxide every year, further contributing to global warming

3. It produces a lot of manure

Although manure is useful for organic farming, factory farming produces over 1 million tons of manure every day, which is too much. Animal waste definitely contains undigested antibiotics, given to the animals for the prevention of contracting or spreading diseases in their confined living conditions.

Manure also contains salt and heavy metal traces that end up in bodies of water, accumulating in sediments and concentrating as they move up the food chain.

Once waste from animals is stored in large open-air lagoons that leak and spill, often during flooding seasons, it eventually pollutes and contaminates water bodies. Industrial agriculture uses about 70% of the world’s freshwater supplies and brings about 75% of all water-quality-related problems in America’s rivers and streams alone.

This is not including the consequences it has on other rivers and streams outside America across the world. To make matters worse, water pollution through factory farming can destroy ecosystems and is toxic, if not lethal to both humans and animals.

The overreliance on manure on farmlands cause dangerous levels of phosphorous and nitrogen in the water systems, leading to nutrient pollution. Too much nitrogen will rob the water of oxygen and eventually destroy aquatic life.

5. It results in too much animal deaths

As already mentioned, about 10 billion land animals are raised for their eggs, dairy and meat products. Factory farming, therefore, results in too many animal deaths each year and that number will continue to grow in the future if the practice is not stopped.

Factory farming is the largest source of animal cruelty all over the world and fast-food chains and supermarkets are further contributing to the same.

These billions of animals find cruelty at the end of their lives but also suffer through more cruelty when being farmed. About 40 billion chickens are subjected to overcrowded factory farms all year long, crammed with up to 10,000 chickens, and living in a space smaller than a piece of paper and laying in their waste. Additionally, 3 out of 4 mother pigs are confined to cages the size of a refrigerator.

7. Effects on the Soil

As the global demand for meat grows, agricultural lands for rearing these animals have to be expanded. This puts more pressure on rivers, oceans and forests, leading to deforestation, as mentioned above, soil erosion, marine pollution and a global biodiversity crisis. The United Nations, for instance, has warned that if these trends continue, the world’s soils will effectively be gone within 60 years.

Antibiotic use, especially in these animals is raising a red flag. The routine prophylactic use of antibiotics is slowly leading to the rise of antibiotic-resistant superbugs. If nothing is done, the resistance in both animals and humans will lead to a post-antibiotic era where treatable diseases will once again kill.

9. The Development of Monocultures

It is a threat to future food security all over the world. There are so many single-crop farms, all aimed at supporting the livestock industry. They are filled with corn, wheat, soybeans and rice, and other crops that have been grown at an unprecedented rate, but only a small percentage of these crops feed the people.

Large-scale farming of these monocultures requires significant amounts of synthetic fertilizer, which stave off insects and eventually adversely affect the soils and surrounding bodies of water.

As mentioned above, farming animals results in very high levels of methane gas production. Methane is a greenhouse gas, more potent and effective than the heat-trapping carbon dioxide, and is responsible for an estimated 20% environmental global warming.

Another greenhouse gas produced by the livestock industry is nitrous oxide, which is 300 times more potent than carbon dioxide at warming the planet and is mainly found in manure and fertilizers.

Seeing the cruelty these animals go through so that some corporations make a profit off our feeding habits, we have to eat less meat, dairy and eggs. An average meat-eater in the United States, for example, consumes about 2,500 pigs, cows, turkeys, sheep and chickens in their lifetime. This is only in the United States.

Imagine the numbers consumed in every meat eater’s lifetime in the rest of the world! Consuming less meat and related products will give animals a life worth living. It will also lower the number of chronic and preventable diseases that affect human beings like cancers, diabetes, obesity and cardiovascular diseases.

See also  Why are Red Pandas Endangered, Why are They Important and Interesting Facts About Red Pandas

It will also reduce the associated greenhouse gases, which contribute to global warming. Consuming less meat, dairy and eggs will be a blow to the terrible factory farming style of rearing animals

2. Only shop for higher-welfare foods

If you choose to shop at farmers’ markets, you will be avoiding factory-farmed meats, dairy and eggs, and benefiting small-scale and small family farmers. Before you purchase the product, ask the farmers how the animals were raised and if it is possible to visit the farms.

Also, ask managers in supermarkets to stock foods from pasture-raised or free-range animals, which have been raised at higher standards than factory-farmed animals. This will kill factory farms and give more back to the small-scale farmers.

Many people are unaware of the cruelty factory-farmed animals go through and choose to remain ignorant. Strive to know more about the animal you are about to consume, and where it came from.

More to that, share such information and let the world know of such cruelty. If you opt never to consume them again, that will be your personal decision, and you should educate the world on why you chose such a decision if it will help advocate for animal rights among such farmers.

Going vegetarian is good, but it also means you will not be consuming dairy, meats, and eggs from these farms. Going vegan equally means these factory farms will have no one to sell to, and they will eventually stop their dirty businesses.

But if you cannot rule meat and related products out of your diet, just consume those that have been raised more recently by the small-scale farmers.

5. Fight the growth of factory farms

Factory farms dominate the markets today with products from animals that were raised very harshly. These industry-dominators, concentrate their efforts on profits, but not on the well-being of the animals.

They mistreat the animals and contribute to environmental pollution, in the process endangering workers, community residents, and the entire world in general. Everyone including you who is reading this piece should join in the fight against these factory farms and help expose them for who they really are.

6. Enact, strengthening, and support of legislations that oppose factory farming

Several federal statutes allow for the regulation of factory farm emissions due to their categorization of Concentrated Animal Feeding Operations (CAFOs) as point sources.

These laws should be strengthened and made in a way that they punish farmers who prioritize profits over the welfare of the animals, as well as protect the planet and its inhabitants. You should also support the drafting of such legislation at a local or state level, helping fight these big corporations.