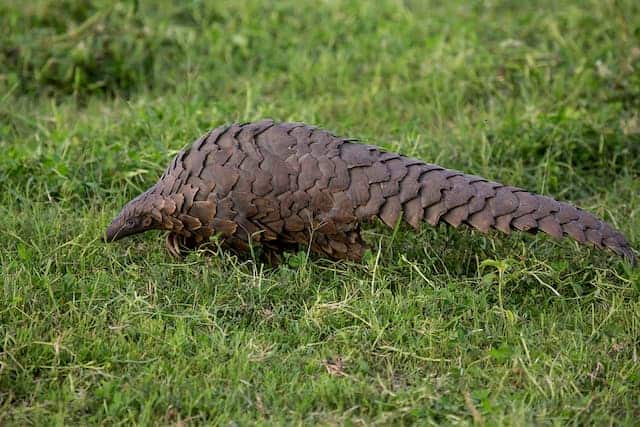 Pangolin is a Malay word which means “rolling over”. It is the defensive capability of this animal to roll into a ball when they feel threatened or so. They are placental mammals on the Pholidota order and they have eight different species. Pangolins are also referred to as scaly anteater. Pangolins are mostly found in Africa and Asia’s tropic environment, in the family Manidae they are categorized in the Manis Pharaginus and Smutsia genera.

Exclusive of the tail, pangolins are between 1 to 3 feet and have a weight of between 5 to 27 kg. The length of the tail varies between the species but usually has a range of between 10 to 28 inches in adult pangolins. Pangolins have a head that is short and tapering, eyes that are heavily lidded, and a muzzle that is long and toothless, its tongue can stretch up to 10 inches long.

Why are Pangolins Endangered?

Pangolins are often highly hunted. They are hunted because of their skin, scales, meat, and some of their body parts are used in making traditional medicine. This has seen the number of pangolin in the world drop to a point where they are now under threat of becoming extinct, for all the eight species.

The Indian pangolin, Philippine pangolin was categorized as endangered while the Sunda pangolin and the Chinese pangolin were categorized as critically endangered by the International Union for Conservation of Nature (IUCN), all this by 2014. This led to the banning of foreign trade that had anything to do with pangolins or their parts by the Convention on International Trade in Endangered Species (CITES) in their 17th meeting held in South Africa in 2016. Here are detailed explanations of why pangolins are endangered

See also  Why are Red Pandas Endangered, Why are They Important and Interesting Facts About Red Pandas

1. Their meat is considered a delicacy

The pangolins are the most traded animal in the world, it is estimated that about 100,000 pangolins are hunted down and sold almost every year. In certain countries in Asia such as Vietnam and China, the meat of pangolins is eaten as a delicacy. The meat is in such high demand in China that even researchers have given a stun warning about the Chinese pangolin being under threat of being eaten to a point of total extinction.

2. Their scales are believed to possess medicinal properties

The pangolins are covered with brown and hairy scales throughout their entire body with the exception on the side of the face and their underside. Most of the species give birth to one offspring at a go, some species in Asia have given birth to two or three.

These young pangolins have soft scales and have to be carried on their mothers back for a certain period. Now the thing is that there is a belief that when pangolin scales are roasted, they could stimulate more breast milk, relieve palsy, and even cure cancer.

The stats of a study conducted over the last year containing information about the poaching of pangolins since 2010 found pangolin scales weighing 2.59 tonnes. This means that over 4870 pangolins had to die in order for the scales to be collected, they also found 259 pangolins that were not mutilated yet although 39 had already died and fortunately 220 were still alive.

The rising demand for pangolin scale has spiked its prices to around 360 pounds in modern-day as opposed to the 8.50 pounds a kilogram it went for in the 1990s. Pangolins trading might be illegal but the demand is still very high, which makes it a very profitable venture. This is why poachers take full advantage of the situation and capture them. They increase their value and weight by feeding the pangolins gravel, illustrating the high economic value of pangolins.

Where do Pangolins Live and What Do They Eat?

See also  What is Poaching? Causes, Effects and Extraordinary Ways to Stop Poaching

They tend to be very shy which is why they mostly live on their own or sometimes in pairs. Pangolins cannot survive for long outside their natural environment, if they stay in unfamiliar conditions they end up dying. They live in different kinds of environments which include tropical and woodland forests, to savannah grassland, thick brush, and cultivated areas.

In Asia, a lot of the land is being put to use in the agricultural sector which puts the pangolin at a disadvantage as they could potentially lose their homes. For sleep and nesting, the pangolin looks for places to dig burrows that have chambers where they make themselves at home. Terrestrial pangolin dig burrows that have very big chambers that could even accommodate a person if they were to crawl through the burrow and stand inside them. Some of the pangolins make a shelter in the forks and hollows of logs and trees.

Pangolins feed on insects, mostly termites and ants, they also eat flies, earthworms, crickets, and even larvae of bees. Their diet limits their survival when they are captured as they do not eat insects they are not familiar with and often fall sick when they eat anything foreign.

They have short legs with five-toed feet that have sharp claws. The hind legs and the prehensile tails support the pangolin by forming a tripod. Pangolins are nocturnal which means they are primarily active during the night; they have a little bit of swimming ability.

The pangolin has eight species: four in Asia and Four in Africa. The massive poaching for their meat, skin, and scales for food and medicinal implications has put them under threat of being extinct.

See also  Elephants: Where Do They Live, Why are They Endangered, Various Threats and How To Save Them From Extinction

All the African pangolin are listed as vulnerable as there is a growing rise in their poaching. They include:

The Asian Pangolins are becoming harder to find which is making poachers to look to Africa as their potential market for the illegal hunts.

How Can You Help Save Pangolins?

The scales of Pangolin are made from the same substance that makes human fingernails and hair called Keratin. It would be better to look for different ways of getting the substance if it has a curative ability. In Asia countries like China have the technical ability to come with better alternatives, this could have a significant impact on the pangolin illegal activities.

Most of the people who eat pangolin do not understand the implications it has on the existence of the species; they usually just eat because of unjustified believes which aren’t enough reason. It is not enough why the animals have to be poached.

The networks that have convinced people that Pangolin has curative abilities and are a delicacy can do work in their favor as well by putting efforts in sustaining their future and initiating projects that can help spread the awareness against poaching and trading of pangolin.

One can get involved in projects that are aimed at sustaining the lives of the pangolin, giving their time, and using the skills they possess in making efforts towards the cause.

4. Supporting organizations in the fight

One could work with collaboration with legitimate organizations that are already making efforts in ensuring that the endangered species are protected like the Wildlife Conservation Society.

CITES has gained enough ground and is considered credible. Its member countries should ensure that not only is the ban imposed internationally but also the local trade is also thwarted. Applying more pressure and making it a public process is the only way that this can be achieved.