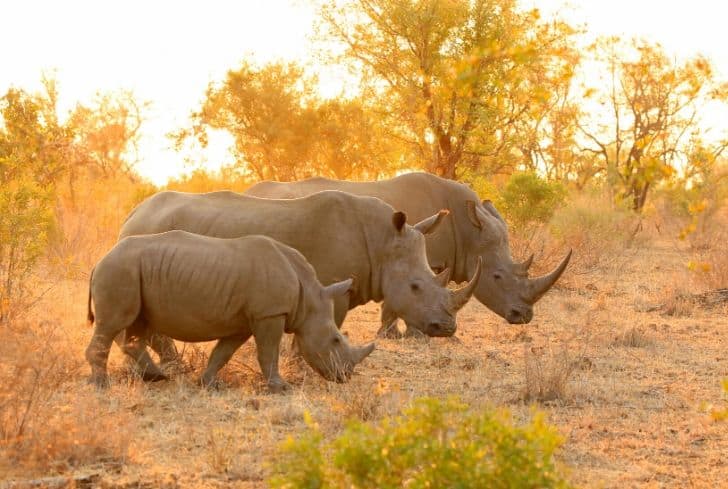 Rhinos are magnificent beasts, massive and powerful, and are classified as one of the Big Five game animals. The rhinoceros or the rhino is distinct for being one of the largest remaining wild animals with weights reaching and exceeding one tonne. They are herbivorous odd-toed ungulates, with a horn or two on the snout, and a thick layer of skin. The rhino is native to Africa and Southern Asia.

There are at least five different types of rhinoceroses, each with specific characteristics that distinguish them. For instance, the African species lack teeth at the front of their mouths, meaning they use their lips to pluck the leafy material they eat. Despite their unique size, they are endangered with the Black, Javan and Sumatran species being considered by the IUCN Red List as critically endangered.

Here are some more details about the rhino with a specific focus on why they have become endangered, where they live, their importance, how the world can help protect Rhinos from going extinct, and some interesting facts about Rhinos.

Few Interesting Facts About the Rhinos

Fact 2. Rhinos can weigh up to 2 tonnes. Rhinos can weigh over 2 tonnes, depending on the species. The ungulates herbivores generally have massive bodies, stumpy legs, and either one or two dermal horns that give them the colossal weight. The black species of Africa, for example, weigh between one tonne and one-and-a-half tonne, with the white species weighing over two tonnes.

Fact 6. Rhinos are mainly native to Africa and Southern Asia. Rhinos mainly roam Asia and Africa with their total number reaching as high as 500,000 in Africa and Asia at the beginning of the 20th century. Today, the number stands at below 29,000 and the drop is as a result of persistent poaching and the loss of their habitats over the decades.

Fact 7. 4 to 10 ft. in length. Rhinos measure between four and ten feet in length and about 60 inches in height at their shoulders.

Fact 11. The Indian rhino has been successfully conserved and their numbers have risen from 200 at the turn of the 20th century to over 3,700 today. The conservation efforts moved the one-horned or Indian rhino from being considered endangered to vulnerable, although it still remains threatened by poachers for its horn.

Why are Rhinos Important?

1. They are vital to the ecosystem

Rhinos are referred to as ‘Umbrella species’ or keystone species. These animals have roamed the earth for millions of years, playing an important role in the ecosystem. They feed on green leafy matter, including grass, consuming heavy amounts of vegetation. They, therefore, help shape the African landscape. They also help other animals such as elephants and buffalo keep a healthy balance within the ecosystem.

2. They are tourist attractions

Rhinos are part of Africa’s ‘Big Five’, meaning they are some of the most noticeable and widely toured animals in the wild. Tourists and locals alike visit parks and other rhino habitats to see these magnificent beasts, thereby contributing to the economy of the location, and country alike. They are hence a source of income for locals.

3. They help protect habitats for others

Where Do Rhinos Live?

There are two species of rhinos that can be found in Africa and a further three in Asia.

They are the greater one-honed rhino, nearly as big as the African white rhino, and can be found in India, Pakistan, and Nepal. They survive in the tall grasslands and forests at the bottom of the Himalayas. About 67% of the Indian rhinos are confined to the Kaziranga National Park in India.

They are one of the most endangered mammals in the world with statistics estimating that there remains only 60 of them. They were hunted to extinction in Nepal, Burma, Sumatra, India, Vietnam, and Peninsular Malaysia. The 58 to 61 individual Javan rhinos are confined inside the Ujung Kulon National Park in Java, Indonesia.

It is the smallest rhino species and the hairiest. It is found in high altitudes in Borneo and Sumatra, Indonesia. There exist about 275 Sumatran rhinos today. They are on the verge of extinction and the species that once roamed across South-east Asia, is now confined to Indonesia and Malaysia.

They also used to reside in Chad, the Central African Republic, Sudan, the Democratic Republic of the Congo, and Uganda but they have been wiped out. The two remaining northern white rhinos as of 2020 are in captivity in a conservancy in Kenya.

The black rhinoceros are mainly found in Tanzania, Zambia, Zimbabwe, Mozambique, and South Africa. Their black rhinos are much smaller than the white rhinos, have a pointed mouth, and can sometimes develop a third horn.

Why are Rhinos Endangered?

Changes in grassland composition, agricultural practices, logging, and deforestation have contributed to the destruction of the habitat that favors rhinos. The remaining are in fragmented and isolated areas. As a result, they might in-breed and produce less agile rhinos.

Being confined to a single location can also contribute to the spread of diseases. The increase of humans also puts pressure on the rhinos and their habitats as the contact between the two leads to animal-human conflicts.

The animals are extensively illegally hunted for their horns. The demand for their horns led to their extinction in several countries, including Vietnam in 2011. Their horns are believed to possess medicinal purposes and aphrodisiac powers, or cure for a number of illnesses like hangovers, fevers, and cancers.

The animals are thus often illegally hunted for their horns for sale in dirty markets for thousands and thousands of dollars. In some parts of Asia, for example, a kilo of ground rhino horn can fetch as much as seventy thousand US dollars. The horns are also considered a symbol of wealth in certain communities.

In some countries, like Vietnam and China, rhino parts find their way into the market as the law against the trade of such animal parts is very lax. Consequently, it has given room for criminals to work in networks and gangs, selling the animal parts for lots of money.

Also, the huge amounts of dirty money have given rise to organized crime, especially by drug traffickers who see the ivory business as a way of branching out.

As already mentioned, rhino parts are traded for high amounts of money with the demands growing higher and higher, thereby pushing the prices even higher in the black markets. The trade-in rhino horns are banned by the Convention on International Trade in Endangered Species of Fauna and Flora (CITES), yet some countries are reluctant to enforce the international treaty.

How We Can Help the Rhinos?

1. Join the fight against poachers

Communities and individuals can join the fight against poaching and the illegal trade of rhino parts, regardless of where they live. Those living within or adjacent to the protected areas should also be vigilant and help protect the endangered animals. They should report any sights of poachers or persons with ill intent against the animals.

Some of the current locations in which the animals reside might not be convenient for them or might be prone to attacks. As such, governments, non-governmental institutions, communities, and individuals should create new locations where they could translocate the animals, giving them hope for a secure tomorrow. The move would also put the animals away from areas where humans are encroaching, threatening the habitats for the rhino.

The current areas where the rhinos live could also be expanded, giving them more space and habitat to roam around.

4. Enforce much more stringent treaties and laws against illegal poaching

Governments should also enforce much more stringent laws, both local and international that fight against poaching and the illegal trade of animal parts. This will not only save the rhino but also every other endangered animal.

If governments worldwide, organizations, and environmental protection institutions work collectively towards cracking down on poaching and the illegal trade of rhino parts, its demand will go down, thereby slowing poaching. Also, perpetrators should be charged to the fullest extent of the law.

World Wide Fund for Nature (WWF). (n.d). Where do rhinos live? And eight other rhino facts. Retrieved on 9 March 2020 from https://www.worldwildlife.org/stories/where-do-rhinos-live-and-eight-other-rhino-facts