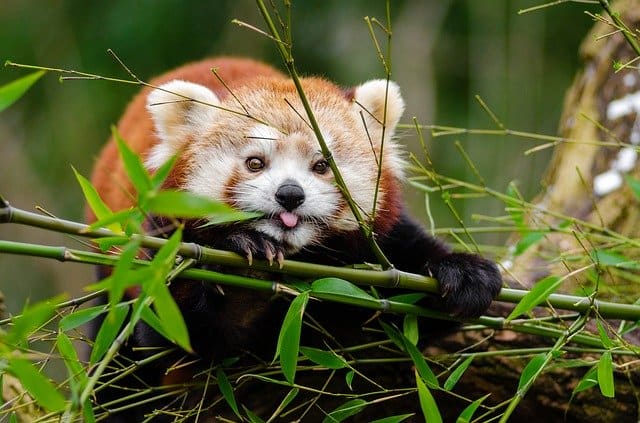 With an estimated population of less than 10,000 left in the world and continued decline due to habitat loss as per World Wildlife Fund (WWF), Red Pandas are an endangered species. Although it shares its name with the black and white giant panda, the red panda is a completely different animal species that grows to the size of a house cat.

Nevertheless, unlike house cats, they have a big, bushy tail that they use as wraparound blankets in their chilly mountain habitats. They have black limbs and belly. They also have white markings above their small eyes and on the side of the head. Despite their small size, the red pandas are very skillful and acrobatic animals.

Why are the Red Pandas Endangered?

Their interesting reddish fur, expressive faces, and striped tails make red pandas some of the most popular animals in Asia. Their popularity has seen them get featured in cartoons as mascots and toys. In spite of their popularity, red pandas are endangered for several reasons that include:

Like all endangered wild animals, the loss of habitat is one of the reasons why the red pandas’ population is declining. Over the last decades, the Himalayan forests have been decreasing at an alarming rate. The forests have seen increased logging operations while farmers are also converting some sections of the forest into farmlands.

It is worth noting that even if the forests are partially cut down, they can lead to a massive population decline of red pandas. Altering the nature of forests can also lead to the separation of different groups of red pandas resulting in inbreeding. Inbreeding leads to less genetic diversity making animals unable to survive in their natural environments.

Poaching is another major reason the numbers of red pandas are quickly declining in forests. Although efforts have been put in place to end poaching, the act is still rampant as natives in the area believe in some traditional myths about the red pandas that put them in high demand.

In China, for example, people believe that a red panda’s fur during a wedding is a sign of a happy marriage. Other people believe some parts of the animal have medicinal properties. Although medicines made with red panda are illegal to buy and sell, they still exist in the black market. The bright, reddish fur and striped tails also make red pandas a prime target for poachers looking to sell their pelts for profit.

Activities of humans living close to the natural habitats of red pandas also endanger the survival of the animals. Red pandas can be accidentally trapped in traps meant to trap other animals, and once trapped, they are never released back into the forest. Instead, they are sold into the black market.

Red pandas are adorable animals. They are also cute and personable. As such, the appealing nature of red pandas makes some people want to keep them as pets. Unfortunately, pandas are not domesticated and thus, they are unable to deal with the stress of captivity.

The stress makes red pandas fearful and aggressive making it highly challenging to domesticate them. They also require a highly specialized diet, which is difficult to offer at home.

Over the years, some animals have found ways to adapt to their changing environment. The ability to move with times has seen some animals like raccoons, which were primarily forest animals, inhabit cities and towns and start eating foods discarded by people. The ability to adapt has seen these animals thrive despite their native homes declining.

Red pandas, however, have failed to adapt to the changing environment. Their digestive system cannot properly digest anything else other than the bamboo shoots and leaves, which means they can only thrive in environments they were originally adapted to live.

All Pandas give birth to one to three cubs at a time, with only one cub surviving to adulthood. Unfortunately for red pandas, their diet of bamboo has low nutrients, which makes it impossible to support two or more cubs at a time.

Furthermore, red pandas are highly selective when choosing their mate. Their selective nature does not guarantee putting two pairs together in captivity will mate, which makes it difficult for breeding programs.

Why are the Red Pandas Important?

1. Red pandas are the only animal representative of its family, the Ailuridae. It is important as it is part of the world’s natural heritage and contributes to the planet’s diversity. In other words, they are irreplaceable.

2. The Red pandas are part of the ecosystem within the Eastern Himalayan Broadleaf Forest. Conservation biologists use red pandas presence as an indicator of the overall health of the ecoregion. As the umbrella species, protecting their habitats also protects other threatened animals like Himalayan black bears, clouded leopards, and many bird species.

3. They help balance the ecosystem. Like all wild animals, red pandas have their own predators. Their extinction would affect the survival of the predators that rely on them for their survival. Furthermore, Red pandas keep bamboos in control by feeding on them. If they get extinct, the bamboo plants can grow out of control, affecting the growth of other plants in the forest.

Where Do the Red Pandas Live, and What Do They Eat?

They have a roundish head with medium-sized upright ears. The pandas have black legs that are short with thick fur on the soles of the paws. They also have sharp semi-retractile claws that are strong and curved inward to help red pandas grasp on narrow tree branches, fruits, and leaves. They also have a false thumb, which is an extension of the wrist bone.

Red pandas live predominantly in trees. They are skillful and acrobatic, which helps them to live and forage in trees, although they also feed on the ground. They rarely live in groups or pairs of families. On most occasions, they live alone in their individual territory. They are extremely quiet and only communicate by twittering and whistling sounds.

They are also highly active at dusk and dawn. They spend their day time resting in tree hollows and branches. They thrive in regions with temperatures between 17 and 25 degrees Celsius. However, they cannot survive in areas with temperatures above 25 degrees Celsius. Red pandas quench their thirst by dipping their paws into water and licking them.

Red pandas are mostly herbivorous mammals with a specialized bamboo-based diet. Although bamboo accounts for two-thirds of the red pandas’ diet, they also eat fruits, berries, lichen, grasses, acorns, mushrooms, and roots. They are also known to occasionally supplement their diet with fish, birds, eggs, insects, and small rodents. Due to their inability to digest cellulose, the red pandas have to eat large amounts of high-quality leaves and shoots to maximize nutrient intake.

The mating season for red pandas runs from the end of December to the middle of February. Their gestation period lasts between 112 to 158 days, and the females give birth to one to four cubs weighing between 3.5 to 4.6 ounces (110 to 130 grams).

The young ones remain at the nest for 12 weeks after birth. They also stay with their mother until the next cubs are born. Red pandas have a lifespan of between 8 to 10 years with a maximum of 15 years. They become sexually mature when they are about 18 months.

Interesting Facts About the Red Pandas

2. Red pandas are vegetarian carnivore animals. Despite being members of the carnivore order like the cats, dogs, bears, the red pandas are mostly herbivorous. Their diet is primarily bamboo leaves and shoots. They are classified as carnivores because they descended from the same lineage as other carnivores.

See also  Pangolins: What are They, Why are They Endangered, Where do They Live and What Do They Eat?

4. Red pandas tweet: The sound red pandas make called twittering. The sound is used to indicate to others it is in its reproductive season.

6. Red pandas are capable of lowering and raising their metabolic rate as they like. This adaptation allows them to save energy. In addition to lowering and raising metabolic rate, red pandas also exhibit other temperature-regulating behaviors like stretching out and panting to lower their body temperature when it is hot and curl into a tight ball to conserve energy when it is cold.

9. Red pandas are endangered. Red pandas have an estimated population of less than 10,000 left in the world and continued decline due to habitat loss.