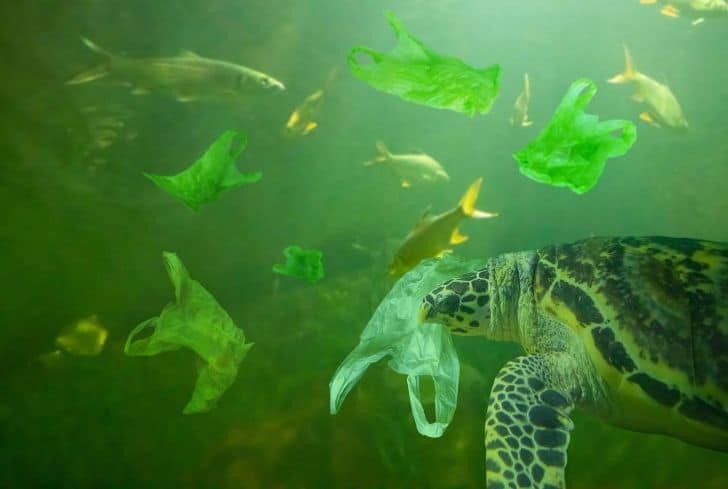 The ocean remains one of the most expansive, mysterious and diverse places on Earth. Unfortunately, it is being threatened by pollution from people on land and natural causes. Marine life is dying, and as a result, the whole oceanic ecosystem is threatened simply by various sources of pollution. If we are to preserve the ocean and its natural beauty, drastic measures have to be taken to combat this pollution and keep what we hold most dear.

Before, it was assumed that because the ocean was so big, vast and deep, that the effects of dumping trash and litter into the sea would only have minimal consequences. But as we have seen, this has proven not to be the case. While all five oceans have suffered as a result of human consequence for over millennia by now, it has accelerated in the past few decades. Oil spills, toxic wastes, floating plastic and various other factors have all contributed to the pollution of the ocean.

“Marine pollution occurs when harmful, or potentially harmful, effects result from the entry into the ocean of chemicals, particles, industrial, agricultural and residential waste, noise, or the spread of invasive organisms. Most sources of marine pollution are land-based. The pollution often comes from nonpoint sources such as agricultural runoff, wind-blown debris and dust.“

“Did you know that approximately 1.4 billion pounds of trash per year enter the ocean?” Source: NOAA

Simply put, the ocean cannot continue to thrive as a dumpsite for people.  While the state of the ocean’s pollution may not come as any sort of surprise to many people, the following cold hard facts might:

Fact 1: Plastic is the most common element that is found in the ocean. It is harmful to the environment as it does not get break down easily and is often mistaken as food by marine animals.

Fact 2: At least 8 million tons of plastic enter the oceans each year. That’s similar to emptying a garbage truck of plastic into an ocean every minute.

Fact 3:  Plastic pollution is one of the most serious threats to the ocean. Plastic does not degrade; instead, it breaks down into progressively smaller pieces, known as microplastic (smaller than 5 mm) by sun exposure and wave action. Then it can find its way into the food chain but never disappears.

Plastic debris can absorb toxic chemicals from ocean pollution, therefore poisoning whatever eats it. It poses a significant health threat to the various sea creatures and the entire marine ecosystem.

Fact 4: There is more microplastic in the ocean than there are stars in the Milky Way.

Fact 5: Over 100,000 marine animals die every year from plastic entanglement and ingestion. More than 50 percent of sea turtles have consumed plastic.

Fact 6: There’s so much junk at sea that the debris has formed giant garbage patches. The term “garbage patch” is a large area actually made up of debris ranging in size, from microplastics to large bundles of derelict fishing gear and other marine debris collects.

These patches are formed by large, rotating ocean currents called gyres that pull debris into one location, often to the gyre’s center. The debris forming garbage patches can be found from the surface of the ocean all the way to the ocean floor.

Fact 7: There are five gyres in the ocean, one in the Indian Ocean, two in the Atlantic Ocean, and two in the Pacific Ocean. The largest is the Great Pacific Garbage Patch.

Fact 8: There is an island of garbage twice the size of Texas inside the Pacific Ocean: the North Pacific Gyre off the coast of California includes an estimated 1.8 trillion pieces of trash. There, the number of floating plastic pieces outnumbers total marine life by six to one in the immediate vicinity.

Fact 9: In fact, plastic is the number one source of pollution in the ocean. When plastic eventually degrades, which is around 400 years for most plastic, the process releases chemicals that further contaminate the sea.

Fact 11: The biggest source of pollution in the ocean is directly from land-based sources, such as oil, dirt, septic tanks, farms, ranches, motor vehicles, among larger sources. Thousands of tons of waste and trash are dumped into the ocean on a daily basis.

Fact 13: Even though mostly the trash and waste dumped into the ocean is released hundreds of miles away from land, it still washes up on beaches and coastal areas, and affects everything in between. Every marine animal is affected by man-made chemicals released in the water.

Fact 14: Oil is the fastest source of deterioration to the ocean, being far more harmful than trash and waste. However, only a small percentage of oil (around 12%) dumped in the ocean comes as a result of actual oil spills. Most oil causing harm in the ocean is a result of drainage from the land.

Fact 15: Oil spills suffocate marine life to death, and leads to behavioral changes and a breakdown in thermal insulation to those that do survive. It essentially changes the entire ecosystem of an affected area, such as a long coastline or deep ocean.

Fact 18: Not all sources of contamination in the ocean come from just oil, trash and solid wastes. The dumping of radioactive waste from nuclear reactors, industrial race (such as heavy metals and acids), and drained sewage are also heavy contributors to pollution.

Fact 19: Littering causes pollution in the ocean, which also causes a substantial loss of life beneath the seas. The truth is that billions of tons of litter end up in the ocean each year, and it is substantially more than the 250 million tons of trash generated. This has led to a gradual loss in marine life and an increase in the number of endangered species.

Fact 20: There is also much noise in the ocean. Noise pollution created by shipping and military activity can cause cellular damage to a class of invertebrates that includes jellyfish and anemones. These animals are a major food source for tuna, sharks, sea turtles and other creatures.​​​​​​

Fact 21: Sewage leads to the decomposition of organic matter that, in turn, leads to a change in biodiversity. Even if the ocean’s ecosystem isn’t destroyed entirely, it is still changed drastically, and often not for the better.

Fact 23: In several parts of the world, including the Gulf of Mexico and the Baltic Sea, Eutrophication has created enormous dead zones that can result in mass die-offs of fish and other marine life, making those zones impossible for marine or plant life.

Fact 24: The dead zones are growing in number. In 2004, scientists counted 146 hypoxia or dead zones, areas of such low oxygen concentration that animal life suffocates and dies, in the world’s oceans. By 2008, that number increased to 405. In 2017, in the Gulf of Mexico, oceanographers detected the largest dead zone ever measured, nearly the size of New Jersey.

Fact 26: People get contaminated easily by eating contaminated seafood that can cause serious health problems, from cancer to damage to the immune system.

Fact 28: The garbage like plastic bottles, aluminum cans, shoes, packaging material – if not disposed of correctly, can reach the sea, and the same garbage can again reach the seashore where it pollutes beaches and affects the local tourism industry.

Fact 29: Salty water of the ocean has the capability to move pollutants from the ocean to coastal freshwater, making wells and groundwater contaminated.

Fact 30: Chemicals from industries and mines can also enter the ocean through land-based activities. They can seep through soil, water or land either during their manufacture, use or accidental leaks. From soil, water or land, they can enter into ocean currents and can travel longer distances.

Fact 31: As 70% of the earth is covered with water, people actually assumed that all pollutants would be diluted and get disappeared. But in reality, they have not disappeared, and their effects can be easily seen as they have entered the food chain.

Fact 32: Until the 1970s, the chemicals and garbage were deliberately dumped into the oceans and became common practice for disposing of everything, including pesticides and radioactive waste, assuming that it would get dissolved to safe levels.

Fact 33: Till today, in many parts of the world, sewage water is discharged in the ocean – untreated or under-treated. This can have a serious effect on marine and human life and can also lead to eutrophication.

Fact 34: We cannot see ocean pollution because most ocean trash sits on the bottom, and it may be worse. Almost 70 percent of ocean garbage actually sinks to the seafloor for which we’re unlikely ever to be able to clean it up.

Fact 35: One effect of greenhouse emissions is increased ocean acidification, which makes the oceans lose mussel mass. It is becoming more difficult for bivalves such as mussels, clams and oysters to form shells, decreasing their likelihood of survival, upsetting the food chain and affecting the shellfish industry of multibillion-dollar.