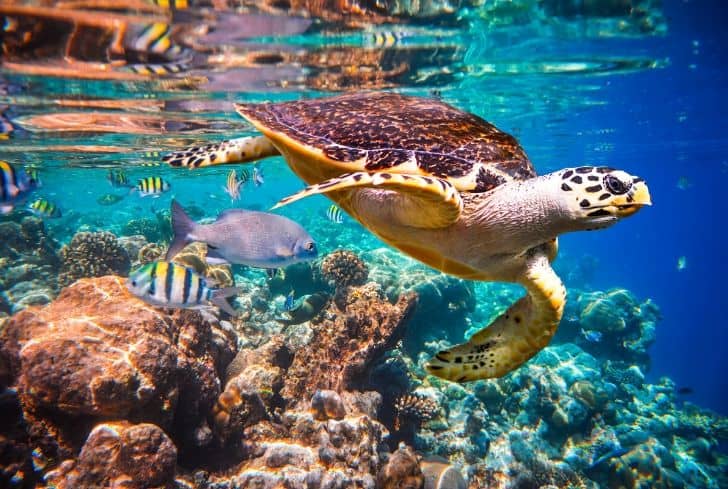 Plants, animals and other organisms have grown on the planet for Millenia, either on land, in water, or other surfaces. Those plants, animals and other organisms that grow or live in water bodies, can be referred to as marine life, ocean life or sea life. They include planktons, algae, seaweeds, mangroves, fish, seals, dolphins, sea turtles, whales, otters, and tuna, among many others.

Today, marine life is facing constant threats and dangers and is slowly dying. Some of the threats include oil spills, global warming, overfishing, plastic pollution, noise pollution, ocean dumping and many others. Here are some facts proving that marine life is dying and potential solutions therein.

For millions of years now, plants and animals exposed to multiple human-made catastrophic events have led to at least 50% of marine species’ mass extinction. The oceans were not entirely unhealthy despite those events, as they continued to support marine life.

But marine plants and animals that could not adapt or survive, died and others took over. Some can thus argue that it is safe to say that the ocean has never died and will not die in the future. Of course, the oceans are vast and has its way of continuing to support marine life.

Despite this, the oceans are facing numerous threats in the contemporary era with thousands of marine life dying and others going extinct.

To a great degree, this is a sure proof that marine life is dying and most of the contributing factors are anthropogenic activities owing to the effects of plastic pollution, noise pollution, ocean dumping, global warming, oil spills and many more as discussed here.

Global warming has resulted in increased harsh weather, melting of polar ice caps and an increase in the sea levels. For this reason, some ocean species such as the silver hake, have shifted further north because their waters are warming up.

Warm waters are also increasing coral bleaching events, causing the coral reefs to shed the zooxanthellae, which gives them their brilliant colors.

Corals support the life and breeding of many marine creatures, and if they continue to be affected by climate change – highly influenced by greenhouse emissions, they will equally continue to die.

As the name suggests, this is the practice of harvesting too much fish. Due to overfishing, over 75% of the world’s fish have been fully exploited or depleted. They are captured as food, for use in aquariums, medicine, or as souvenirs.

Marine pollution mainly comes from the mainland into the ocean, although it might arise from the oceans themselves, like during oil spills. Debris comes from land and marine animals could become entangled in it, or swallow it. In general, it inhibits the proper movement and breathing of such animals, which kills them.

The world’s population is growing daily and as a result, there have been developments along most coastlines. Such developments have impacted wetlands, coral reefs, mangrove swamps, seagrass meadows, rocky shores and beaches, thereby significantly affecting the survival of marine creatures as these are some of their breeding grounds. Coastal development also increases population along the beaches that in turn affects marine life survival.

Coastal developments, commercial activities, and tourism have also contributed to risks facing marine life through the loss of habitats such as the coral reefs and mangrove swamps.

As a result, marine life such as marine birds and turtles have been left with no place to live or lay their eggs for the continuity of their lineages. Some die, decreasing their populations, while others are forced to relocate.

Ocean acidification mainly arises due to the release of sulfur and nitrogen oxides, and carbon dioxide from greenhouse gases, which also cause global warming and climate change.

When the oxides react with oxygen ad dissolve in ocean water, they form various types of acids such as carbonic acids and weak sulphuric or nitric acids.

As the water becomes more acidic, it loses its ability to sustain marine organisms. Some marine creatures also lose their ability to form shells due to the increased acidity and it can also disrupt their reproductive processes.

Some marine species, such as sea turtles are hunted illegally for their meat, shells and eggs. The species is protected under the Convention on International Trade in Endangered Species of Wild Fauna and Flora (CITES), but continues to be poached and illegally hunted in countries such as Costa Rica.

Sharks are also illegally fished in the Galapagos Islands and crab by Russian fishing fleets, despite being protected by law. Some also use crude means such as cyanide and dynamite to capture, stun or kill the animals, further destroying their habitats.

These are the species introduced into an area that they are not natives. As a result, they cause harm to the indigenous species and habitats. If their populations explode, they become natural predators in the new environs.

For instance, lionfish, are thought to have been introduced in the US by accidental dumping of live aquarium fish into the ocean after a hurricane.

Effects of Pollution on Marine Life

When seabirds, sea turtles and other animals ingest plastic, the waste clogs their stomach, causing them to starve to death. About 60% of all seabird species have ingested pieces of plastic, and scientists predict the figure will rise to 99% by 2050.

There are an estimated 13 million metric tons of plastic being disposed of in the ocean each year. As a result, fish, sea birds, sea turtles and other marine animals are entangled in the debris. Those that ingest the plastic debris also suffocate, starve and drown to death.

3. We Eat Plastic Waste Too

Plastics do not fully decompose even after hundreds of years. For this reason, some of the plastic ingested by the fish and other marine mammals that we eat ends up on our tables. We, therefore, end up eating the plastic debris we dumped on the oceans.

Plastic waste accelerates the growth of pathogens in the ocean. If the pathogens come in contact with corals, there is an 89% chance of the corals contracting diseases, in comparison to the 4% likelihood for corals that do not.

Some fish and marine mammals move to or away from sources of sound. Noise pollution thus changes the vocalization, diving and swimming patterns of the said animals and fish. As a result, some of the animals can be harmed because of behavioral changes.

6. Noise Pollution Can Also Cause the Death of Marine Life

As already mentioned, some animals will migrate to new areas as their normal life is disrupted due to noise pollution. Also, loud noises can mask the proper communication and navigation of certain marine animals.

Because of this, they will become prey to other marine animals, and might also make them be easily captured by fishermen.

Garbage dumped in ocean waters will most likely float on the water and cut-short the supply of oxygen into the water. It means that the oxygen in the water will become depleted, resulting in poor health for marine life.

The outcome is that marine creature such as seals, penguins, fish, dolphins, herring, whales, sharks, and other animals will die from oxygen deprivation.

Oil spills are incredibly dangerous to marine life and coral reefs. The oil clogs fish gills, blocking their respiratory system, leading to their death. Also, oil floats on water and creates a layer that denies sunlight from penetrating through the water.

In such cases, marine plants die as they cannot make food through photosynthesis, which requires sunlight.

Plastics do not decompose easily and as such, they ought to be recycled, and recycled properly. Presently, only about 9% of all plastic in the world is recycled, meaning the greater proportion of it, eventually finds its way into the ocean waters.

Finding firms, centers and establishments near you that are devoted to recycling plastic waste, so that we eliminate the amount of waste heading to the oceans.

2. Organize or Participate in Beach and River Clean-ups

There are a myriad of organizations, groups and individuals who participate or strongly pursue ocean clean-ups, including cleaning the beaches. You can join them and help prevent more waste from entering the waters. It is a direct and rewarding way of fighting plastic pollution.

Additionally, you can support the organizations, firms, groups and individuals devoted to fighting plastic pollution. They rely on donations and you can pledge your donations, thereby making a difference.

There are a number of nations and municipalities all over the world which are enacting legislation aimed at banning the use of plastics, including containers, bags and bottles. Support such legislation and help it be adopted all over the world, protecting such material from ever reaching the oceans ever again.

Greenhouse emissions are a huge contributor to global warming and climate change and a massive threat to marine life. The world should advocate for greener energy such as solar and wind energy.

Corporations and manufacturing giants should switch to renewable energy and factories should handle their waste, especially waste which goes directly to the atmosphere.

Individuals should also spread the word on the effects of greenhouse gases on the environment and help reduce such emissions.

6. Punish Establishments Built Next to Bodies of Water That Dump Directly into Oceans or Waterways:

There is a lot of trash and rubbish lying on the streets and it ends up in the stormwater drains. When it rains, the trash could be washed down into rivers and oceans, meaning street rubbish will end up affecting marine life.

Clean the streets and stormwater drains, and eliminate the possibility of cigarette butts, oil from cars, and any other rubbish from entering the waters.

Some marine pollution is caused by accidents or natural events that can hurt installations by certain corporations, like oil pipelines. After such accidents, oil spills into the water and affects marine life.

Such corporations should be made liable and fined heavily to ensure they take responsibility for cleaning such a mess. Such tough legislation also ought to be employed when dealing with people and corporations dumping waste directly into bodies of water.

9. At an Individual Level, Continue Spreading the Word!!

It is our responsibility to educate more and more people on the effects of pollution on marine life. We should gather as much new information as possible and disseminate it to others, making them make more sane decisions.

10. And Finally, the Buck Stops With You and Me!

Ultimately, it is our individual role to minimize rubbish from entering the waters and it can be stopped by doing something as simple as reducing our use of single-use plastics.

Whether they are water bottles, cups, dry cleaning bags, straws, plastic bags, utensils and take-out containers, or cans that are used only once and then discarded, let us avoid them or dump them correctly after use.

We should refuse to use them especially if we can live without them, and instead, use reusable versions of the same, like recyclable bags, bottles, and other utensils.

Stone, G. The Five Biggest Threats to Our Oceans. HuffPost. Retrieved from https://www.huffpost.com/entry/the-five-biggest-threats-_b_5453534

‘What you can do to protect our marine environment’. (2019). Ministry for the Environment, New Zealand. Retrieved from https://www.mfe.govt.nz/marine/we-all-have-role-play/what-you-can-do