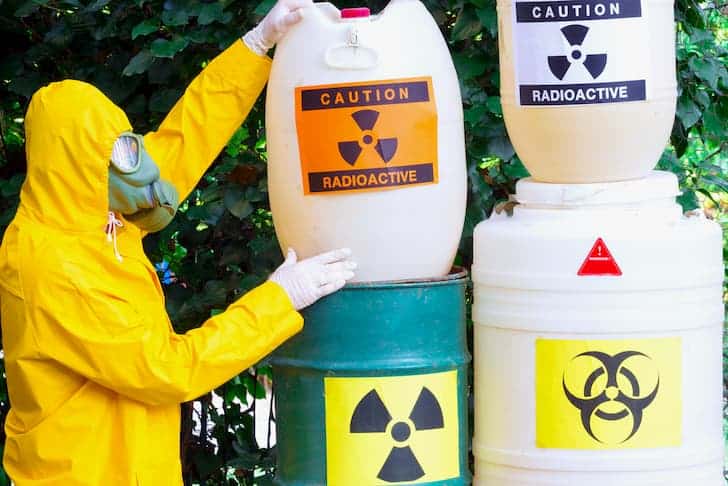 Radioactive waste is nuclear fuel that is produced after being used inside of a nuclear reactor. Although it looks the same as it did before it went inside the nuclear producer, it has changed compounds and is nothing like the same. What is left is considered radioactive material and is very dangerous to anyone. This is very dangerous and remains this way for not just a few years but thousands of years.

It must be handled in the right manner so as not to cause a ton of devastation in the world. It could take just seconds to die from exposure to radioactive materials. In short, radioactive waste is a kind of waste in gas, liquid or solid form that contains the radioactive nuclear substance.

There are many industries like mining, defense, medicine, scientific research, nuclear power generation which produce by-products that include radioactive waste. The radioactive waste can remain radioactive for a few months, years or even hundreds of years and the level of radioactivity can vary.

The radioactive waste is extremely toxic as it can remain radioactive for so long and can cause acute radiation sickness when it first comes out of the reactor if you stood within a few meters of it while it was unshielded.

Those who work inside of these facilities must be trained extensively to protect themselves and the rest of the world. It is very dangerous, although some types of radioactive waste are considered to be more harmful than other types. Since it is so hazardous and toxic, finding suitable disposal sites for radioactive waste remains a tedious task. Therefore, a safe disposal site is required to ensure the safety of humans, animals and this environment from toxic gases.

According to the United States Nuclear Regulatory Commission, more than 104 licensed nuclear facilities are located inside the United States. These reactors total 20% of the energy consumption being used. There are five types of radioactive waste- high level, low level, intermediate level, mining and milling and transuranic waste. All types of nuclear wastes have their own separate storage and clean-up procedures.

You will find that there are two types of nuclear reactors. These types are the pressurized and boiler water reactors. High-level nuclear waste, simply put, is spent fuel that is still present after it has been used inside of nuclear reactors. This radioactive waste has to cool off for several years and is considered to be very dangerous.

The cooling process of this waste usually takes place inside of deep pools of water that are several hundred feet deep. These pools can be located on-site or off-site of the nuclear facility, although the off-site facilities are limited and must be approved by the EPA.

This type of waste is hazardous to people for many reasons, but especially because it remains radioactive. High-level waste accounts for 95% of the total radioactivity produced in the nuclear reactor. This type of nuclear waste is very dangerous. It must consistently go through a process to keep it cool and the radioactive material under control.

High-level waste can have short and long-lived components depending upon the time it will take for the radioactivity to decrease to levels that are not considered harmful for humans and the surrounding environment.

The intermediate level waste contains 4% of all the radioactivity. Intermediate-level waste that requires long term management are transferred to an authorized waste management operator.

Most of the radioactive waste that is around today is considered to be of low level. In fact, about 90% of all nuclear waste is low level. Nuclear reactors, hospitals, dental offices, and similar types of facilities often use low-level nuclear waste materials on a daily basis, and it is needed in order to provide the services that are offered within these facilities.

Low-level nuclear waste is not dangerous, and any of it can be disposed of inside of a landfill. This is the reason why it does not require shielding during handling and transport.

Even so, there is a strict criterion in which it must be handled and disposed of. Without proper disposal, what is not dangerous has the possibility of becoming that way. This is not a chance that you should be willing to take when it is so very easy to protect yourself. The low-level waste contains just 1% of the radioactivity of all radioactive waste.

Tailings and waste rock are generated by mining and milling of uranium ore. The tailings material is covered with water and has the consistency of fine sand when dried. It is produced by grinding the ore and the chemical concentration of uranium. After a few months, the tailings material contains 75% of the radioactivity of the original ore.

Transuranic waste or TRU waste contains more than 3700 be per gram of elements. It is much heavier than uranium. This type of waste is produced through nuclear waste reprocessing procedures in most cases. This is one of the least worried about types of radioactive waste that is out there, but it is worth mentioning since it is a part of nuclear waste.

Non-commercial activities can bring nuclear waste to the forefront. There are several activities, including by-product materials and uranium mining, to name a few. The clean-up standards and procedures for these activities vary and are set forth by the Environmental Protection Agency.

Exposure to certain high levels of radiation can have negative effects on the human body that can even cause death. Radiation exposure can also cause cancer, birth defects, and other abnormalities, depending on the time of exposure, amount of radiation, and the decay mechanism.

It is interesting to know that we are exposed to radiations naturally by living the lives that come from the ground below us. Radiation can cause changes in ‘DNA’ that ensures cell repair.

Scavenging of abandoned radioactive material has been the cause of several other cases of radiation exposure, mostly in developing nations, which may have less regulation of dangerous substances and a market for scavenged goods and scrap metal. Irresponsibility on the part of the radioactive material’s owners, usually a hospital, university or military, and the absence of regulation concerning radioactive waste, or a lack of enforcement of such regulations, has been significant factors in radiation exposures.

The scavengers and those who buy the material are almost always unaware that the material is radioactive, and it is selected for its aesthetics or scrap value. Usually, people who scavenge these sorts of materials will end up in the hospital and may even die of problems related to or caused by the radioactive materials.

When radioactive material was disposed of improperly or safeguarding during transport was defective, or when it was simply abandoned or even stolen from a waste store, a few incidents have occurred. In the Soviet Union, waste stored in Lake Karachay was blown over the area during a dust storm after the lake had partly dried out.

At Maxey Flat, a low-level radioactive waste facility located in Kentucky, containment trenches covered with dirt, instead of steel or cement, collapsed under heavy rainfall into the trenches and filled with water. The water that invaded the trenches became radioactive and had to be disposed of at the Maxey Flat facility itself.

If radioactive waste seeps into the ground, drinking water can become contaminated, too, which is absolutely disastrous for locals and residents live close to the epicenter of the disaster. It can eventually get into reservoirs and other water sources and, from there, can reach the homes of people who unwillingly drink high radioactive material.

Despite all the cautions that are put into place while transporting radioactive waste from power plants, accidents still occur and can have a devastating effect on all those in the vicinity of the crash can occasionally result in problems. In case poor shipping casks are used for the containment of radioactive material, then a slight knock or bump or even crash could cause the contents to spill and affect a wide radius.

If one of these accidents does occur, there is no simple or easy route when trying to clean up spilled radioactive material. The cost of cleaning up and making everything safe once again for people, animals and plants is very high, and it can take years to ensure that an area is safe to live in or even to visit once again. In the case of very serious accidents, it may take many decades until things normalize to start living once again.