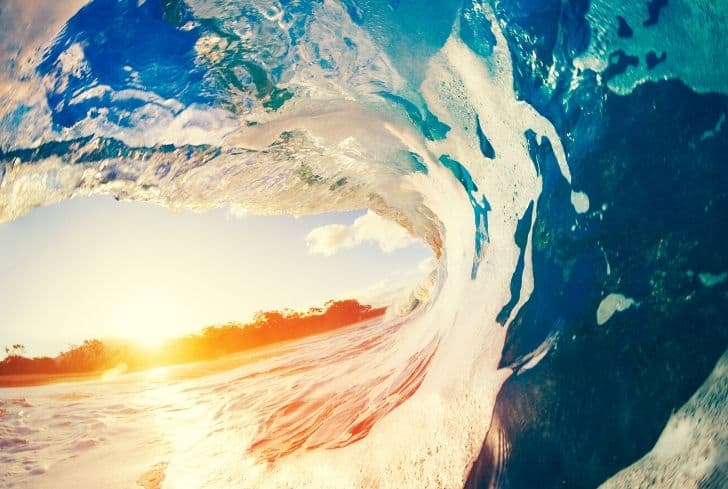 Ocean currents refer to the steady movement or flow of surface ocean water in a prevailing direction. Various forces act upon ocean water, causing it to move. They include the wind, temperature, breaking waves and at tides, and sometimes underground forces like earthquakes.

Ocean currents are the movements of ocean water due to gravity, the rotating earth (Coriolis effect), water density, the sun, and wind. The various forces determine the size, speed direction, and shape of ocean currents. The water can either move horizontally – known as currents, or vertically – known as downwellings or upwellings.

“An ocean current is a continuous, directed movement of sea water generated by a number of forces acting upon the water, including wind, the Coriolis effect, breaking waves, cabbeling, and temperature and salinity differences. Depth contours, shoreline configurations, and interactions with other currents influence a current’s direction and strength. Ocean currents are primarily horizontal water movements.“

They are currents that occur on the top layer of the ocean and are primarily driven by wind. They affect the water on the upper 300m of the ocean. The currents mirror the large-scale circulation of air, mostly derived from unequal heating of the planet’s surface by the sun.

The currents, therefore, form rotating systems in the middle of the ocean systems, called gyres. Surface currents are responsible for redistributing heat at a planetary scale.

As opposed to surface currents that occur on the upper surface of the ocean, deep-water currents occur deep inside the ocean. As they occur far below the surface, they are not influenced by the wind.

However, they arise as a result of variation in the density of the ocean water and are controlled by the temperature and salt content of the water.

Upwelling currents are currents that move from deep in the ocean heading towards the surface. They are responsible for bringing organic matter from below the ocean towards its surface.

For instance, they sweep nutrients upwards, helping some marine life. It can be seen when there are tremors or earthquakes on the surface below the ocean and the waves are pushed upwards.

In Antarctica, upwelling currents pump nitrogen and phosphates up from the deep sea to blooms of algae and other plants.

The planktons can then be eaten by crustaceans called krill, which in turn are eaten by penguins, seabirds, seals, and the baleen whales, the largest animals on earth.

These are currents that move material from the surface of the ocean towards its floor. Surface water can be forced downwards by the pressure of the water when currents converge or wind drives the ocean against a coastline.

It is important as the dissolved oxygen in the sediments and water below would quickly be used up by the decay of organic matter.

Additionally, anaerobic bacteria would take control of decomposition, contributing to a build-up of hydrogen sulfide and only a handful of benthic animals would survive such toxic conditions.

Gravity tends to pull items towards the surface of the earth. When the wind blows ocean water, the water piles up in the direction of the wind. Gravity, therefore, pulls the water down the ‘hill’ against the pressure gradient.

4. The salinity of the water

When water moves towards the poles, it gets cold and freezes into ice, leaving a share of salt behind. It makes the underlying water saltier, making it denser. The cold, saltier and denser water sinks to the floor of the ocean and is replaced by surface water in the process.

It refers to the rotation of the earth. It produces forces on all bodies moving relative to the earth. As the earth is spherical, the forces are greatly felt at the poles and least at the equator.

Coriolis effect also results in the wind changing direction, with Northern Hemisphere winds and currents moving towards the right while Southern Hemisphere currents being deflected to the left.

1. They result in rain

Warm currents lead to evaporation, which turns into the rain for the coastal areas. For instance, North Atlantic Drift brings rainfall to Western parts of Europe that results in rains throughout the year.

2. They can also cause deserts

Cold currents do not give rise to moisture-laden winds and, therefore, there is no rainfall in the coastal regions. The conditions cause desertification in the affected coastal regions, such as the Kalahari and Patagonia Deserts because of the cold Benguela and Falkland currents, respectively.

3. They can destroy marine wildlife

Some currents might be too strong and end up destroying planktons. For instance, El Nino currently destroys planktons along the Peruvian coasts. It also brings with it several diseases that kill fish.

4. They help with the continuity of life

In Antarctica, strong upwelling currents pump nitrogen and phosphates up from the deep sea to blooms of algae and other plants. The planktons are eaten by crustaceans called krill. The krill in turn feed penguins, seabirds, seals, and the baleen whales – the largest animals on earth.

5. They save up on time and costs

It goes to the advanced knowledge of currents by sailors. When currents are in their favor, they can reach their destinations in time. They can also rescue shipping time and fuel costs.

However, if they are against the sailors, they might make tore time battling the currents, and use more fuel to sail past those currents

6. They can result in deaths

Ocean currents can also result in deaths and destruction of property if they are strong enough to overpower ships in the ocean. Of course, to do so, they have to be very strong and probably accompanied by tremors or lightning, but in the end, they can lead to disastrous results.

Ocean currents are responsible for moving the heat from the equator and towards the poles. As such, they maintain the natural order and balance of the climate.

Marine wildlife is heavily dependent on the balance created by the ocean and is maintained by the ocean currents. The currents carry nutrients and food organisms, feeding the plants and animals that depend on them.

They also carry reproductive cells and ocean life to new places. The best example is sea turtles that lay eggs in the sand along the shores of the ocean. The ocean currents then carry the young hatchlings into the water.

3. They are vital for ports in the polar regions

Ocean currents are also important as they disperse many life forms. For instance, the lifecycle of the European eel is highly sustained and influenced by ocean currents.

Humans rely on ocean currents to move some of their sea vessels, such as boats, on water. Currents are also important as they help when docking and undocking boats, speeding up shipping lanes, and keeping the ships safe, primarily in narrow waterways.

The direction of currents can also help in search and rescue missions as well as environmental disaster clean-ups.

6. They are responsible for some sports

Not all sports are played on dry land. Some currents create waves that can be used for competitive sports or recreational activities such as surfing. When surfing, a surfer rides with or against the wave, helping carry the surfer to shore.

How Do Ocean Currents Affect the Climate?

1. Maintaining the climate around the poles

Currents are also responsible for rains. Warm currents migrate from around the equator towards the poles and at the same time, the warmth causes the water to evaporate. The same will result in rains around the coastal regions or the ocean.

Ocean currents are continuously directed by the movement of ocean water. Forces acting on the water, such as its density, temperature, and its salinity, among others, control the currents on the ocean.

The global conveyor belt is a system of deep and surface currents, which move water all over the globe. The currents circulate the globe and can be instrumental in determining the climate of a region.

For instance, the North Atlantic Drift brings rainfall to Western parts of Europe, and Benguela and Falkland’s currents cause desert conditions in the Kalahari and Patagonia Deserts, respectively.