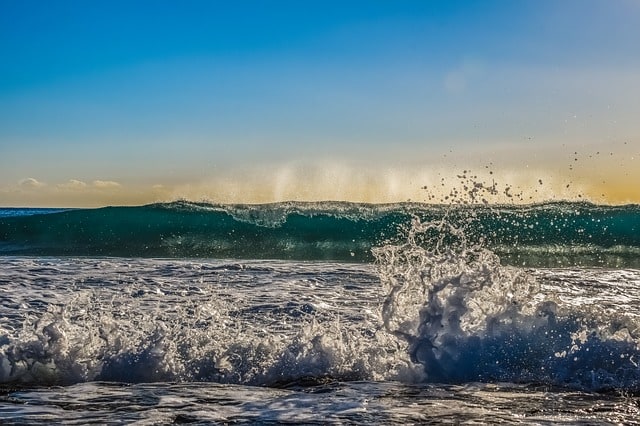 The pursuit of wave energy dates all the way back in 1799 when Girard and his sons filed a patent to utilize wave energy in Paris. The modern pursuit of wave energy went all the way to the Empire of Japan in 1940 when it was developed by Yoshio Masuda, a former Japanese naval commander, who was regarded as the father of modern wave energy technology. Wave energy only gained popularity after the 1963 oil crisis when Professor Stephen Hugh Salter invented the eponymous Salter duck wave energy device that was able to convert 90% of wave motion into electricity, generating 80% efficiency.

Wave energy, also known as ocean energy or sea wave energy, is energy harnessed from the ocean or sea waves. The rigorous vertical motion of surface ocean waves contains a lot of kinetic (motion) energy that is captured by wave energy technologies to do useful tasks, for example, generation of electricity, desalinization of water and pumping of water into reservoirs.

Wave energy or wave power is essentially power drawn from waves. When the wind blows across the sea surface, it transfers the energy to the waves. They are powerful sources of energy. The energy output is measured by wave speed, wave height, wavelength and water density.

The more strong the waves, the more capable it is to produce power. The captured energy can then be used for electricity generation, power plants or pumping of water. It is not easy to harness power from wave generator plants and this is the reason that they are very few wave generator plants around the world.

When you look out at a beach and see waves crashing against the shore, you are witnessing wave energy. It’s not being harnessed or used for the benefit of anyone in that state, but it is there producing power. And some enterprising individuals would say it is just waiting to be used to make our lives better and our energy consumption cleaner and cheaper. Wave energy is often mixed with tidal power, which is quite different.

But how are those waves formed? When the wind blows across the surface of the water strongly enough it creates waves. This occurs most often and most powerfully on the ocean because of the lack of land to resist the power of the wind.

The kinds of waves that are formed depending on where they are being influenced. Long, steady waves that flow endlessly against the beach are likely formed from storms and extreme weather conditions far away. The power of storms and their influence on the surface of the water is so powerful that it can cause waves on the shores of another hemisphere. For example, when Japan was hit with a massive tsunami in 2011, it created powerful waves on the coast of Hawaii and even as far as the beaches of the state of Washington.

See also  Is Hessian Biodegradable? (And Various Uses of it)

When you see high, choppy waves that rise and fall very quickly, you are likely seeing waves that were created by a nearby weather system. These waves are usually newly formed occurrences. The power from these waves can then be harnessed through a wave energy converter (WEC).

How is Wave Energy Converted into Electricity?

In order to harness wave energy and make it create and energy output for us, we have to go where the waves are. Successful and profitable use of wave energy on a large scale only occurs in a few regions around the world. The places include the states of Washington, Oregon and California and other areas along North America’s west coast. This also includes the coasts of Scotland Africa and Australia.

Wave energy is, essentially, a condensed form of solar power produced by the wind action blowing across the ocean water surface, which can then be utilized as an energy source. When the intense sun rays hit the atmosphere, they get it warmed up. The intensity of sun rays hitting the earth’s atmosphere varies considerably in different parts of the world. This disparity of atmospheric temperature around the world causes the atmospheric air to travel from hotter to cooler regions, giving rise to winds.

As the wind glides over the ocean surface, a fraction of the kinetic energy from the wind is shifted to the water beneath, resulting in waves. As a matter of fact, the ocean could be seen as a gigantic energy storehouse collector conveyed by the sun rays to the oceans, with the waves transporting the conveyed kinetic energy across the ocean surface. With that in mind, we can safely conclude that waves are a form of energy and it’s the same energy, not water that glides over the surface of the ocean.

These waves are able to travel throughout the expansive oceans without losing a lot of energy. However, when they reach the shoreline, where the depth of water is considerably shallow, their speed reduces, while their size significantly increases. Ultimately, the waves strike the shoreline, discharging huge quantities of kinetic energy.

The Wave energy hitting the shore is converted into electricity using a wave energy converter (WEC), essentially, a power station. The operating principle of this power station is both simple and ingenious. It’s an enclosed chamber with an opening under the sea, which allows strong sea waves to flow into the chamber and back.

The water level in the chamber rises and falls with the rhythm of the wave, and so air is forced forwards and backward via the turbines joined to an upper opening in the chamber. The compressed and decompressed air has enough power to propel the turbines. The turbine is propelled in the same direction by the back and forth airflow through the turbine. The propelling turbine turns a shaft connected to a generator.

The generator produces electricity, which is transported to electrical grids and later supplied to demand centers and distribution lines that connect individual homes and industries. The advantage of this wave energy converter is that even considerably low wave motions can produce sufficient airflow to maintain the movement of the turbine to generate energy.

You can read more about the wave energy converter at SINN Power.

The wave arrival pattern is highly predictable. They arrive day and night and harbor more energy than other renewable sources like wind and solar. Wind energy and solar energy, on the other hand, are highly unpredictable.

Wind speeds die down unexpectedly, which affects the generation of electricity. Solar energy depends upon exposure from the sun, which means cloud coverage and night hours significantly reduce this exposure leading to less efficiency.

It’s a renewable form of energy

Renewable means it’s an endless resource. It does not need man’s intervention to continue existing. No one has dared to suggest that the oceans and seas will disappear someday. Humans will continue harnessing it to the very end. This aspect makes wave energy a reliable and efficient energy resource.

Wave energy is a completely clean energy source, which means, it does not emit dangerous greenhouse gasses to the atmosphere. Fossil fuels, for instance, oil, coal and natural gas contribute mightily to environmental pollution because they release dangerous greenhouse gasses including carbon dioxide, nitrous oxide, methane, and ozone to the atmosphere.

Communities living in remote areas and declining industries like the shipbuilding industry bear the biggest brunt of unemployment and economic unsustainability due to lack of electricity.

The wave energy sector has the potential to create numerous green opportunities to remote and urban populations alike because remote areas that are not able to be reached by conventional electricity supply are well catered by wave power.

The exponential growth of remote areas

The wave energy harnessed can to channeled to remote locations, and this means springing up of industries and businesses. These remote areas will witness strong economic growth moving forward.

Setting up a strong wave energy infrastructure can enormously help a country from overdependence on fossil fuels. The fossil fuel market is largely volatile and could hurt a country’s economy if a shortage occurs. Wave energy is the surefire way to bridge this volatility gap since it’s cheap, reliable and efficient.

Wave energy plants can be situated offshore alleviating any risk that comes along with these plants situated onshore like soil pollution. Also, the land remains in its natural state unlike fossil fuel extraction, which requires high levels of excavation that leaves land heavily damaged.

Construction of wave energy plants requires huge capital outlay. Energy plant maintenance, connection to the power grid, wave resources, expected drop in energy costs once the infrastructure is up and running and shelf life of the technology are just some of the variables driving up the cost of wave energy. Determination of actual cost is also difficult since wave energy is in its early stage of development.

The wave magnitude is so unpredictable in the seas. Sometimes it comes with a vengeance and could cause heavy wear and tear to the wave energy generation turbines. Damage to this equipment can be costly in terms of repair. It would also mean the stalling of electricity supply.

Offshore wave energy projects are a lot more sophisticated than onshore ones. The projects include platforms, cables, turbines, interconnections, dredging and much more. From an ecological standpoint, shallow waters are fertile breeding and resting grounds for most marine life.

So, activities from construction and operation of the wave energy plant greatly affect the marine ecosystem. Accidental leaks or spills emanating from hydraulic fluids in the plants could potentially pollute the water resulting in marine life deaths.

Although wave energy is a clean energy source, the sound produced by the plant generators could prove unbearable to some local residents. The plants also interfere with the natural aesthetic look of the ocean. However, the noise of the waves, in most occasions, equalizes the noise produced by the generators.

When the advantages and disadvantages of wave energy are put side by side, the advantages far outweigh the disadvantages, especially, in this day and age where everyone is focusing on renewable forms of energy. Fossil fuels have proved to be detrimental to human health and environment, so expect the most governments to scale up on wave energy production.

So, now that you know, maybe next time you look at a beach, you’ll see something more than just waves.