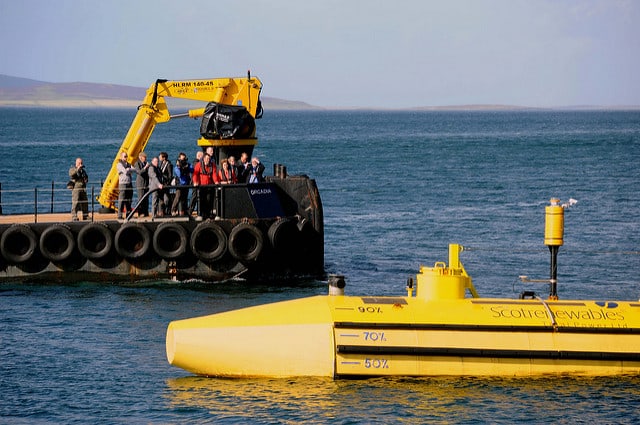 Tidal energy or tidal power is a form of renewable energy obtained due to alternating sea levels. The kinetic energy from the natural rise and fall of tides is harnessed and converted into electricity. Tides are caused by the combined gravitational forces of the moon, sun, and earth. However, tides are influenced most by the moon. The moon’s gravitational force is so strong that it tugs the ocean into a bulge. The high and low tides create tidal currents, which are essential in the generation of this kind of energy, mostly prevalent in coastal areas.

Tidal energy is considered a renewable energy resource because the oceans and seas will remain until the end of time, and tides are highly predictable.

Tidal energy generation plants are most commonly installed along coastlines, although offshore plants are increasingly becoming popular. Coastlines are preferred because they receive 2 high tides and 2 low tides every single day. To generate electricity, the disparity in water levels must be at least 5 meters.

Tidal power has great potential for the future as tides can be much more accurately predicted than wind or sun and due to the massive size of oceans. Though it available in plenty but harnessing energy from it is not that easy. It suffers from huge investments and limits the availability of sites where it can be captured.

How Tidal Energy is Converted into Electricity?

Tidal turbines utilize the same technology as wind turbines. The only difference is that the blades of tidal turbines are way stronger and shorter. So, the best way to compare tidal turbines is underwater windmills. Ideally, the water currents turn the turbine. The turbine is connected to a generator through a shaft. So, when the turbine turns, the shaft also turns.

The turning shaft activates a generator, which generates electricity. The initial cost of setting up this tidal stream system is quite on the higher side, not to mention the difficulty in maintenance. However, it remains a cheaper alternative and doesn’t cause environmental degradation compared to other tidal technologies.

Tidal Barrages are the most efficient tidal energy technologies. They resemble dams used in hydropower plants. The difference is they are a lot bigger since they are constructed across a Bay or an Estuary. For the barrage to be able to produce power, the tidal range, which is the difference between low and high tide, has to be more than 5 meters.

As the tide enters the system, ocean or seawater flows via the dam into the basin. When the tides subside, the system’s gates close, trapping the water in the estuary or basin. When the tides start to move out, the gates in the dam that consist of turbines open up, and water begins to flow out, hitting the turbines, which eventually turn to produce energy. Construction of tidal barrages involves high upfront capital costs, plus they have devastating effects on the local environment.

This technology has a lot in common with tidal barrages. It’s just that it doesn’t involve a lot of initial capital outlay, and it’s friendly to the environment. A tidal lagoon is a power station separated from the rest of the ocean or sea. Its functionality is similar to tidal barrage since when the tide goes up, the lagoon completely fills up. When the tide subsides, the water is allowed to drain out through an opening consisting of turbines. The outward flow of water turns the turbine, which generates energy.

By taking the time to critically analyze the advantages and disadvantages of tidal energy, you can get a clear picture of whether it’s a sustainable energy resource or not. Below is an outline of the upsides and downsides of tidal energy.

The fact that tidal energy technologies are installed on the coastlines and offshore makes them good for the environment since the land will not be interfered with. Also, tidal energy is a clean source of energy, meaning it doesn’t release any greenhouses gasses to the atmosphere.

Tides harnessed to produce tidal energy result from the combined gravitational pull of the sun, moon, and earth in conjunction with the rotation of the planet around its axis. This is a natural process that occurs every single day. This means that tides will continue to occur, and production of tidal energy will continue until the end of time.

The development of tides is a well-understood cycle. This makes it a lot easier to develop tidal energy systems with the right dimensions. Why?  Because the level of power the system will be exposed to is already determined. Which explains why the capacity of the installed equipment and the entire physical size has completely no energy generation limitations, even though stream generators and tidal turbines used resemble those of wind turbines.

Tidal energy technologies, once constructed, have the potential to generate electricity for many years, which means they are long-lasting. Although the upfront costs of setting up a tidal power plant are relatively high, the return on investment will be realized in the long run. A typical example is the La Rance tidal barrage, which is still producing electricity since 1966.

Fossil-based sources of energy such as oil, coal and natural gas emit greenhouse gasses that lead to climate change and global warming. Tidal energy offers a green and renewable alternative to cut back on greenhouse gas emissions.

6. Offers a sense of protection

Barrages and dams that are utilized to tap tidal energy for the generation of electricity could insulate coastal areas and ship ports from high impact and dangerous tides in the course of bad weather and storms.

7.It’s quite effective than wind even at low speeds

Oceans currents have the capacity to produce more energy than air currents because ocean water is 832 times denser than air. This means ocean currents applies greater force on the turbines to generate more energy.

Tidal energy technologies are considerably new. Meaning the costs of infrastructure are relatively high at the moment. Experts also project that tidal energy will only start to be commercially beneficial in 2020 with enhancements of innovative technologies.

The generation of tidal electricity wholly depends on tidal surges, which happen twice a day. This means when tides are not happening, there is no production of energy, which is why extra costs must be incurred to set up energy storage systems.

Tidal power plants need a lot of time to be able to produce electricity efficiently. This aspect, combined with the cost of installation, can be unsustainable. A typical example of a tidal power plant that was closed due to time and cost overruns is the UK’s Severn Barrage.

The greatest fear among tidal energy systems developers is the impact the plants and turbines will have on the surrounding marine ecosystem. The rotation of turbines and vibrations of the tidal plant could significantly interrupt the marine ecosystem and inhibit the natural movement of marine life.

Although tidal energy technology is still in its infancy stage, the grave impacts of fossil fuels and the fear of them running out someday means a lot of time and resources will be dedicated towards the generation of tidal energy. Even though other renewable and green sources of energy such as sun, wind and geothermal are way ahead, tidal is fast catching up with the pack. Tidal energy is seen as the next big thing once its technology becomes a lot better.

The world’s first tidal barrage, in Brittany, built between 1961 and 1966, was the world’s largest tidal energy generator until 2011, when it was overtaken by South Korea’s Sihwa Lake. Currently, this is world’s oldest and second-biggest renewable tidal power plant operated by Électricité de France (EDF), which has an annual generation capacity of 540GWh.

The basin area covered by the plant is 22km2. It took three years to build a 145.1m long barrage with six fixed wheel gates and a 163.6m-long dyke at a cost of £81m. Power is produced through 24 reversible bulb turbines with a rated capacity of 10MW each.

The plant site features an average tidal range of 8.2m, the highest in France. Electricity is fed into the 225kV national transmission network serving the needs of approximately 130,000 households every year.

Daewoo Engineering & Construction was the engineering, procurement and construction (EPC) contractor for this $355.1m tidal power project built between 2003 and 2010. The annual generation capacity of the facility is 552.7GWh.Power is generated on tidal inflows into the 30km2 basin by ten 25.4MW submerged bulb turbines. Eight culvert type sluice gates are used for the outflow of water from the barrage.

It took seven years to construct, costing the equivalent of about $1m per MW, but has allowed South Korea to reduce CO2 emissions by more than 300,000 tonnes each year while also saving on oil costs.

Annapolis Royal Generating station is the only tidal power plant in North America so far. It is located in the Annapolis Basin, a sub-basin of the Bay of Fundy in Canada with an installed capacity of 20MW, making it the world’s third-biggest operating tidal power plant. It generates 50GWh of electricity annually to power over 4,000 homes.

MeyGen Tidal Energy Project, located in the Inner Sound of the Pentland Firth off the north coast of Caithness, Scotland, is currently the world’s biggest underwater tidal turbine power project under development.

In April 2018, global power generation company Atlantis Resources had completed the construction of the Phase 1A project. The first phase of the project uses four 1.5 MW turbines with 16m rotor diameter turbines submerged on the seabed.  Phase 1B involves the installation of four additional 1.5 MW turbines, while Phase 1C will add an additional 49 turbines with a combined capacity of 73.5 MW. Phases 2 and 3 of the MeyGen project will increase the overall capacity to 398 MW, with full operation expected in 2021.

The project is owned and run by Tidal Power Scotland Limited and Scottish Enterprise. The project received £1.5 million Scottish Government grant in 2020.

The power station feeds the energy demand of small villages at a 20 km (12 mi) distance through a 35-kV transmission line. The maximum tidal range in the estuary is 8.39 m (27.5 ft). Now it is a Major National Historical and Cultural Sites in Zhejiang

It will comprise 16 hydro turbines, a 9.5km breakwater wall, generating electricity for 155,000 homes for the next 120 years. Its major delivery partners include Atkins, General Electric, Andritz Hydro, Laing O’Rourke and Alun Griffiths Ltd.

Swansea Bay Tidal Lagoon is already world-famous. The project has been presented to audiences across the globe, including to European Union energy ministers and at COP21, the 2015 Paris Climate Conference.

The Penzhin Tidal Power Plant Project is a set of proposals for the construction of a tidal power plant in the Penzhin Bay. Penzhin Bay has one of the strongest tides in the world, and there have been several proposals for power stations. One of the proposed variants presumes an installed capacity 87 GW and annual production of 200 TWh of electricity, costing around £200bn.