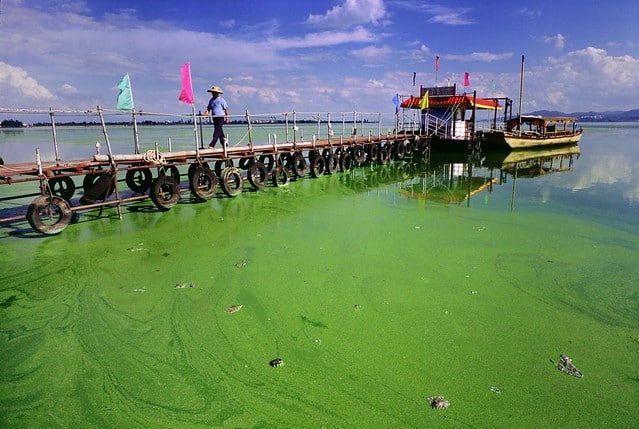 Nitrogen itself is considered as an inert gas, it makes up 78% of Earth’s air. Of most importance is that nitrogen is a vital element for plant growth and existence of various organisms on earth, but when in excess in the natural environment, it becomes a bad thing and this is basically what leads to nitrogen pollution.

In other words, Nitrogen pollution refers to the damages caused to the environment, wildlife, and people’s health as a result of excess Nitrogen and Nitrogen compounds such as nitrous oxides, nitrogen oxide, and ammonia in the natural environment.

Similar to carbon pollution awareness, damages caused by Nitrogen pollution are just as important, however, Nitrogen poses a larger threat 300 times that of Carbon dioxide; and people need to be more aware of their Nitrogen footprint. To elucidate more on this topic of Nitrogen pollution, this article focuses on its impacts and various solutions to it.

During precipitation, the presence of Sulphur oxide and excess nitrogen oxides compounds react with oxygen molecules and other chemicals in the atmosphere that eventually leads to acid rain. Nitric acid rain causes damages to livestock, plants, and aquatic plantations and animals as well as infrastructure.

In aquatic habitats, it can affect breeding as it can interfere with the optimum conditions for egg hatching and the survival of young species. It may also interfere with feeding systems as some plants that fish and other aquatic animals feed on might not be able to tolerate high levels of acidity. They may die leaving the fish with very little or nothing to feed on.

When people consume fish and other aquatic animals that have fed on algae, there are increased risks of respiratory diseases and other serious life-threatening conditions like cancer.

Additionally, decomposition of algae in lakes, rivers, and other water bodies use up a large percentage of oxygen, which is detrimental to aquatic organisms – can lead to suffocation.

3. Deterioration of soil microbes and acidification

Depending on the type of fertilizer used, the PH of soil can be either acidic or alkaline. Nitrogen-based fertilizers are one of the common options for farmers because of its benefits to the growth of plantations. In excess, plants cannot absorb all the nitrogen, thus it slowly gets leached out through water runoffs.

The presence of ammonium-based fertilizer products leads to high acidity in soils; whereby it drains all water molecules in the soil leaving a high amount of salt traces that cause plants to experience dehydration. This eventually kills vital soil microbes and coupled with the rising acidity levels, the results are deterioration of soil fertility and crop productivity.

Solar energy released to the earth’s surface penetrates the atmosphere, and normally, it eventually rises back into space.

The presence of high quantity of gases in the atmosphere from greenhouses including nitrous oxides; however limits the process of the sun’s heat from bouncing back to space and alternatively, it gets absorbed by these gases, thus releasing solar heat back to the surface of the earth. The outcome of this is the intensification of the greenhouse effect (rising global temperatures).

This is produced when the sun’s heat rays react with nitrogen oxides and other gases that are released from the combustion of fossil fuels into the atmosphere.

Smog poses health risks by directly and indirectly exposing humans to complications such as allergies, heart and lung problems, and even colon cancer. Particularly, this is caused by the release of fine matter particles into the ground-level ozone.

6. The decrease in biodiversity levels.

Studies of Europe in 2010 showed that the ecosystem is at a high exposure to nutrient pollution, hence a serious challenge to the conservation of plants and animal species. When nutrient nitrogen exceeds, wildlife, livestock, as well as plants, are exposed to pollutants that deteriorate their lifecycle and alter the food web.

There are also other effects compounded by nitrogen pollution elements like acid rain, air contamination, and eutrophication that have been major threats to biodiversity.

In areas where farming is frequently practiced, high traces of nitrogen are present in underground water caused by infiltration from the soil due to water runoffs. Underground water, in most cases, is used for domestic use, can end up being contaminated by nitrogen-based fertilizers.

Reports from various parts of the world, especially within areas that extensively use nitrogen-based fertilizers, have reported the high concentration of nitrogen content in drinking water and even in animal protein that feeds on pastures around such areas.

When consumed, it can cause major health risks such as organ damage and failure, and even certain types of cancers.

Government and environmental conservation institutions incur high costs to clean out water to make it suitable for human consumption and safe for plants and animals. Because simple boiling technique will not emit nitrate from water, techniques such as reverse osmosis, distillation, and ion exchange units are used.

As such, the treatment of large quantities for domestic, agricultural, and industrial use to meet large population seems costly. Using the correct techniques: the higher the concentration of nitrogen the higher the cost of nitrate treatment.

9. Loss in the tourism industry

Activities such as recreational fishing, deep-sea diving, enjoying an aesthetic quality of nature, and other boat activities that would be a main tourist attraction for the aquamarine are hampered due to the effects of nitrogen pollution, especially eutrophication and the degradation of coral reefs.

Besides, inhalation, consumption, or long term exposure to the nitrate dense water or bi-products, causes health risks to both tourists and habitats of the area, creating low demand to visit these sites. In the US, for example, the tourism sector experiences loss amounting to $1billion annually.

Algal bloom is the main cause of dead areas in water bodies. When the algae decay, it uses so much oxygen that deprives fish of oxygen; thus reducing the volume of output from fish farming. Algae species such as the blue-green algae, the red –tide algae release neurotoxins that are harmful to fish.

With large dead areas, the variety of species of fish fall, and the demand for freshwater fish increases, but demand is not met prompting options such as importation, which creates additional costs in the fish farming sector.

Despite agriculture being the main source attributing to nutrient pollution, limiting its adverse effect while maintaining proper farming practices should be a major goal for communities and the nation at large. Suggested methods that can be put into practice to mitigate the above-mentioned problems brought about by nitrogen pollution include:

In order to reduce the amount of nutrient-based fertilizer circulating in the economy, various governments across the globe should place strict policies that control the production of fertilizers.

Placing regulations where the contents of the fertilizers such as nitrogen and phosphorous are keenly regulated to be of optimum quantities to reduce excess that will eventually be harmful to the soil and the ecosystem should be made a top priority.

For instance, it can be done by issuing a mark of standardization, to ensure that the fertilizer contents are of good quality for both human and livestock consumption; to reduce the health risks that arise from the same.

2. Use of animal manure fertilizers

Manure from livestock such as cows should be a go-to option as opposed to the use of synthetic fertilizers because the contents of synthetics are not all time safe for farm use. Animals have more than enough nutrients in their bodies to sustain normal body functions, and often, high quantity is eliminated as manure.

Also by feeding livestock with the correct amount of phosphorous and regulating the amount of animal feed consumed, it will effectively control the nutrient level in the manure used in the farms.

Maintaining a proactive routine checkup of the quality of water may help detect any unusual nutrient level. As a result, it will help moderate nutrient pollution before it gets out of hand.

The government together with institutions that are well equipped with laboratories and proper equipment; can work collaboratively to monitor the quality of water and nitrogen content nutrient levels to prevent the abnormal growth of algae.

Aeration in water bodies such as waterfalls creates a surface movement that prevents stagnant water which favors attachment and growth of algae. Algae will normally bloom in sunny and warm water with minimal movement that has a buildup of muck at the bottom of the water.

An increase in oxygen through aeration helps the growth of aerobic bacteria which competes with the algae growth, eventually slowing it down.

5. Use of safe herbicides

With various high nitrogen content herbicides present in the market, the algae crisis cannot be easily controlled. As such, much safer herbicides with low nitrogen concentration need to be introduced and continuously used to address the situation.

This strategy should also not just end with the introduction of safe herbicides but also the use of the correct quantity to help control algae growth, subsequently preventing pollution and the contamination of water for domestic, agricultural, and industrial use.

Planting deep-rooted vegetation along with water bodies, help create a buffer to prevent trash and unwanted nutrients flowing into water runoffs. This prevents the growth of algae as well as reducing water pollution by creating barriers that control infiltration.

This refers to the process of adding beneficial bacteria to the water bodies. It helps reduce algae food source and also helps to improve water clarity, by breaking down waste from fish, and decomposed plantations hence purifying the water.

8. Reduce excess use of synthetic fertilizers

Using phosphorus-free fertilizers can attribute greatly to a reduction of nitrogen pollution in the world’s ecosystem. Correctly using fertilizers by only applying it in periods where there is less rainfall and when it is needed can effectively reduce water runoffs and infiltration of nitrates underground.

Sewage should not only be dumped far from water bodies but also treated for nutrients and contaminants removal before dumping, especially if it is to be discharged into water systems.

Accordingly, proper sewer management will not only improve biodiversity but also decrease health risks and nitrogen pollution impacts such as eutrophication that come with poor sewage disposal.

Nitrogen and Water by USGS

What is Nitrogen Pollution by Nature