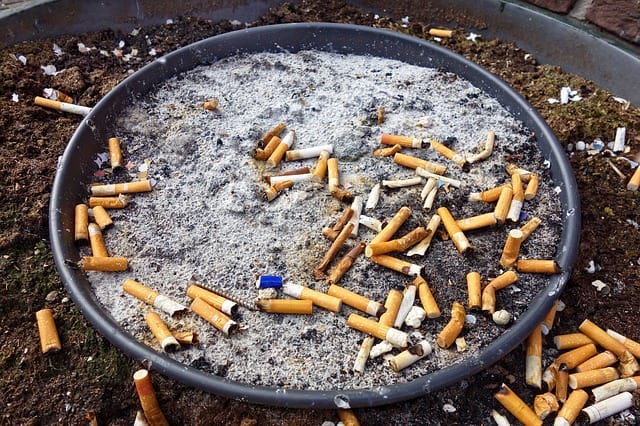 More than seven billion cigarettes are smoked worldwide each year and it is estimated that three-quarters of butts of the total cigarettes smoked end up in the natural environment as litter. Studies also show that 30 to 40 percent of the total items collected in streets, roads, along the beach, and many other places annually are primarily composed of cigarette butts.

In the US alone, cigarette litter is the single most collected item along the road with a total percentage of 38 and out of any six items collected, five of them are cigarette butts. An International Coastal Cleanup in 2016 showed that more than 1,030,640 cigarette butts were collected along the US beaches making it the most common litter in the area.

Moreover, 12,089 cigarette lighters, 33, 865 tobacco wrappers or packages and more than 50,000 cigar tips were collected in the same cleanup exercise. Most smokers consider the cigarette butt to be litter but still throw them away in the open streets. Herein are the harmful effects of cigarette litter on the environment and the solutions.

Harmful Effects of Cigarette Litter on the Environment

1. A Source of coastal areas Pollution

For example, a cleanup exercise of counties such as the Orange County in California, USA, has yielded 20 times the litter that was collected by ICC in the same year. These data make cigarette litter a great threat to the environment. The cigarette butts are not entirely from cigarettes smoked within the beaches but also due to people dropping them on sidewalks, and moving cars.

2. Destroys the aesthetic value of the environment

The data from the ICC indicates that most smoking takes place outdoors. Not only does this raise concern over the number of passive smokers whose health might be affected by this behavior, but also the cigarette butts turn a beautiful place such as beaches into unsightly areas.

Besides, the litter is hard to remove from the locations where they are lodged such as in storm drains, beaches, streets, and streams. Major cleanup groups have been concerned with the effects the cigarette has on the cleanup practice.

Environmental studies indicate that a cleanup exercise involving cigarette litter is expensive – at an estimated cost of approximately $150,000 to the state for an exercise taking only two weeks long. The fact that these cigarette butts are non-biodegradable makes them even more difficult to control.

In the wake of the 1950s when convincing evidences revealed that cigarette causes cancer, most manufacturers devised a way to reduce the tar and nicotine intake among smokers by using filters. The filters were made of cellulose-acetate and during the following years after 1950, major campaigns promoted the use of cigarette with filters.

The discovery of filter was regarded as a safe technology for reducing tar and nicotine inhalation, and manufacturers called these cigarettes safe. Though the filters have since been considered harmless to smokers, the cellulose acetate used to manufacture cigarettes are non-biodegradable.

The ultraviolet rays from the sun may eventually break down the filters into small pieces but the source material still remains, making it a great threat to the environment’s flora and fauna. The smaller pieces are usually diluted in soil or water.

4. They contain toxic chemicals that affect marine life and wildlife.

Apart from being unsightly, the cigarette butt contains highly toxic chemicals. Most environmental groups, especially those concerned with conservancy of marine animals fear that the marine creatures might ingest cigarette filters containing harmful chemicals. Studies reveal that cigarettes are acutely toxic to freshwater animals such as cladoceran and a marine bacteria microtox.

The main causative agent of the toxicity has been identified as nicotine and ethylphenol found in the leachates of cigarette filters. Another investigation conducted on the effects of cigarette butt wastes on wildlife has shown that birds such as passerine use the cellulose cigarette filters in their nest lining to wade off any parasite.

See also  Is Confetti Biodegradable? (And Alternatives to Confetti)

Similar cases have been recorded among the house finch (Carpodacus mexicanus). With the increase in consumption of cigarette and urbanization, these animals seem to have succeeded in their efforts to increase host fitness. However, the effects are short-lived because of the potential long-term negative health impact.

Studies of the birds have revealed that blood genotoxicity of their hatchlings has increased with the increase in cigarette litter. The long-term effects are the endangerment of the birds’ offspring overall health.

The littering of the environment with cigarette waste can be a threat to the children living around such areas. Further, reports have been documented where young children collect cigarette butts and ingest them. Out of such cases, the Rhode Island study in 1997, for example; one-third of the children showed signs of transient nicotine toxicity. Such a report is an indication that cigarette butts are a hazardous solid waste that can endanger children’s life.

The cigarette litter from the tobacco industry has been shown to deposit more than 1.3 million pounds of toxic chemicals. One cigarette butt per square meter, for example, has a 20-fold higher content of nicotine residue than the EU’s Maximum Residue Level. Other chemicals released according to reports by the Environmental Protection Agency are salts, nitrates, ammonia, and sulfuric acid.

These chemicals lead to land pollution in areas where plants grow. And since plants can easily absorb chemicals from the soil, they become intoxicated and this leads to biomagnification when ingested by primary consumers.

Studies indicate that some plants such as herbs and spice have considerable levels of nicotine. The nicotine from these plants are absorbed from the soil and the chemical’s origin is from the cigarette butt wastes that leaches out nicotine alkaloids.

1. Banning of smoking in public places and the reckless disposal of cigarette butts.

See also  How Many Amps Does a Microwave Use? (Detailed Guide)

Solutions such as completely banning smoking in public areas and the reckless disposal of cigarette butts, and instead have designated zones for smoking can be a sustainable solution.

Since it is hard to control smoking behavior, companies producing the cigarettes can introduce printed warnings on the packages cautioning people against littering. The warning label should be of considerable size, for example, as per the FDA regulation in the US notifying the users that the cigarette filters are non-biodegradable and hazardous waste. This can be followed with appropriate laws on waste disposal, description of human toxicity, and any other relevant information.

Efforts to find the most appropriate mechanism for regulating wastes from technological products have led to the Advanced Recycling Fee (ARF) legislation – a fee customers pay that is included in the buying price. The ARF is intended to cater for the cleanup and recycling of the tech products.

The same strategy can be used for cigarettes where a waste fee can be used to mitigate the environmental consequences. It would also fund research on cigarette butt wastes. Furthermore, with an added fee, people may be discouraged to buy them.

The state, insurance companies, and individuals have been forced to pay for the health costs associated with the ill effects of cigarette consumption through litigation. Similarly, the tobacco industry should be held responsible for the environmental degradation resulting from cigarette butt litter. Since 1990, the tobacco companies have failed in coming up with biodegradable filters and it is only through litigation or legal action that this status quo can be changed.

People who violate any form of the smoking ban like smoking along the beaches should be fined a heavy fee to discourage the bad practice. In some countries, for example, the fine for littering may reach $1000 if the offender can be correctly identified. The same penalty should be extended to people who litter smoking-free areas in a bid to curb cigarette littering. Furthermore, such fines can be used in supporting cleanup efforts and would motivate smokers to be responsible, eventually urging them to properly dispose of cigarette butts.