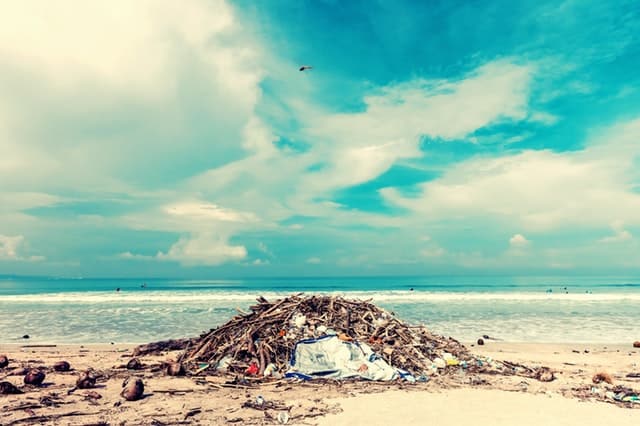 Soil pollution is the build-up of chemicals, radioactive materials, toxic compounds, and disease-causing agents in the soil to levels that can cause adverse effects on plant growth and damage to both human and animal health. The pollution of the soil is either caused by natural activities or human actions that destroy its properties, such as structure, composition, and soil biota.

Naturally, the soil contains contaminants such as metals, salts, inorganic ions, and organic compounds that are mainly formed through soil microbial activity. These natural compounds (contaminants) rarely build up to generate pollution.

In most cases, however, the soil is polluted because of human activities and usually results in both long-term and short-term impacts. Essentially, it leads to the deterioration of the soil’s mineral content, quality, and texture.

Essentially, all life depends upon the soil … There can be no life without soil and no soil without life; they have evolved together.

Byproducts and waste generated from households, industries, artificial chemicals, petroleum products, and mining sites are the leading contributors to soil pollution. Some of the soil pollutants are biodegradable and decompose gradually after a given some time.

Others are non-biodegradable, which means they can persist in the soil for a long period. The soil pollutants can be classified as physical, biological, and chemical. Here is a discussion on the sources and solutions to soil pollution.

Agricultural practices such as the use of non-organic products in crop and livestock production lead to soil pollution. These substances include artificial chemical pesticides, herbicides, fungicides, and fertilizers, as discussed below:

i) Pesticides, herbicides, and insecticides

The introduction of modern pesticides, herbicides, and insecticides has resulted in an increase in the use of agricultural chemicals. These chemicals are used to control the pests, insects, weeds, fungi, and diseases that attack crops.

Most of these chemicals are non-biodegradable, while others decompose to products that are toxic to soil. These products seep into the ground and act on the soil, thereby changing its structure, composition, and pH.

ii) Improper use of fertilizer

Fertilizers are mostly used to correct the deficiency of soil nutrients. A soil that is deficient of potassium, calcium, nitrogen, and sulfur, among other important macro-nutrients, should be treated with the right fertilizer and at the right amount.

However, some farmers use fertilizers indiscriminately, leading to soil pollution. What is more, the materials used to manufacture fertilizers contain impurities that add to soil toxicity. For instance, the rock phosphates mineral used for the manufacture of mixed fertilizers contain traces of Asbestos, Cadmium, and Lead, which are transferred to the fertilizer during production. These metals are non-biodegradable and, with time, accumulate to toxic levels.

Industrial wastes or byproducts are among the leading causes of soil pollution. They can be in the form of gas, liquid, or solid substances. Carbon dioxide, nitrogen dioxide, sulfur dioxide, and carbon monoxide are some of the gases produced from industrial activities that cause considerable pollution to soil indirectly.

These byproducts combine with the rainwater causing the production of acidic rain, which changes the soil pH and, after that, affects the overall crop production. Industries also dump their solid and liquid effluents into the soil.

Most developing countries have a problem controlling the disposal of municipal garbage. The garbage is dumped anyhow and contains wastes such as food waste, plastics, industrial wastes, e-waste, and general household wastes.

It appears as if the urban administrators do not know that most of the non-biodegradable waste materials could be recycled and the organic materials disposed of in areas designated for natural decomposition.

Sewage plants also contribute to soil pollution owing to how they dispose of sewage sludge from domestic and commercial waste. The sewage sludge is usually treated before being disposed of into land or water bodies.

When disposed of on land, the sludge can release high amounts of nutrients depending on the source that may surpass the natural soil nutrient requirement, thus posing a risk to human health and/or the ecosystem at large. Sewer sludge may also contain high levels of metals, further polluting the soil.

Mining activities cause soil pollution on a large scale. The operations cause a change of the landscape and expose the previously undisturbed soils to the elements of weather.

Erosion of the soil containing some traces of mineral ores and fine materials around the mining areas results in sediment loading in the water sources and drainage ways. They end up in the soil through irrigation and flowing stormwater.

There are also other hazardous materials that leak from mining activities, including harmful dust particles that are deposited on the surrounding soils. In developing countries, the pollution levels are even higher because activities such as gold mining are done using traditional methods, which lead to the release of mercury and other heavy metals into rivers and neighboring lands.

Some of the polluted rivers are also used for irrigation, further leading to the pollution of the irrigated soils.

Every living organism is continuously exposed to background radiation. If the levels of these radiations exceed a given limit, they lead to disastrous effects. Radiation pollution results from two sources, that is, the natural and anthropogenic actions.

In nature, there are radioactive minerals that contribute to soil pollution such as radionuclides of radon-222 and Radium -226, Thorium, Uranium, isotopes of Potassium (K-40) and Carbon (C-14) are commonly found in soil, rock, water and air. All the radionuclides deposited on the soil emit gamma radiations.

The explosion of hydrogen weapons and cosmic radiations include neutron, proton reactions by which Nitrogen (N-15) produces C-14. This C-14 participates in Carbon metabolism of plants, which is then transmitted into animals and human beings.

Radioactive waste contains several radionuclides such as Strontium90, Iodine129, Cesium-137 and isotopes of Iron, which are most injurious. Strontium gets deposited in bones and tissues instead of calcium.

Improper disposal of wastes from nuclear reactors containing Ruthenium-106, Iodine-131, Barium140, Cesium-144 and Lanthanum-140 along with primary nuclides Sr-90 with a half-life 28 years and Cs-137 with a half-life 30 years can, therefore, result in soil pollution and contamination.

Rainwater carries Sr-90 and Cs-137 to be deposited on the soil, where they are held firmly with the soil particles by electrostatic forces.

Though not a direct contributing factor to soil pollution, deforestation leads to the removal of the shield that protects the soil against the agents of erosion. The exposed soil is easily eroded and exposed to artificial chemical pollutants from the air, wind, and rain.

Soil gets a large amount of human, animal and bird excreta, which constitute a major source of land pollution by biological agents.

When pollutants in the air such as sulfur dioxide and nitrogen oxide mix with rain acid rain occurs, which has been found to impact soil negatively by dissolving important nutrients and even changing the soil’s structure.

To reduce soil pollution, there is a need to adopt the Reduce, Reuse, and Recycle strategy. Some of the solutions to soil pollution include:

The use of organic means of farming can reduce soil pollution on a global scale. Bio-fertilizers and manures reduce the need for chemical fertilizer. Pests and diseases in crops can also be controlled through the use of biological methods, consequently reducing soil pollution.

2. Reusing and Recycling of materials

Glass containers, papers, plastics, metals, organics, petroleum products and cloth materials, industrial effluents etc. should be recycled as well as can be reused at domestic levels in a bid to reduce soil pollution.

Reusing will limit the need for replacing the used products, thus relatively reducing the number of household waste products such as plastics and e-waste that are sent to the landfill. Industrial wastes should be properly treated at source. Integrated waste treatment methods should be adopted.

Recycling is another means of reducing the disposed of wastes. Some plastics and glass can be recycled to lessen the volume of wastes and encourage environmental conservation.

Planting more tree cover is the best way of reducing soil pollution by minimizing erosion and the effects of floods. Reforestation achieves this by providing protective ground cover for the soil.

Contaminants can be removed by evaporation. By application of the right temperature through indirect or direct heating, the pollutants can escape through the process of evaporation. Stream stripping is an example of such a method where a jet of steam is injected into the contaminated soil to cause evaporation of volatile pollutants.

See also  Causes, Effects and Solutions of Agricultural Pollution on Our Environment

However, this method is not sustainable because the release of the contaminants from the soil sends them into the atmosphere causing air pollution. As much as it’s an alternative method of addressing the impacts of soil pollution, emphasis should be on recycle, reuse, and reduce.

In this method, the soil is brought into contact with the right chemical through a chemical process of restoring the natural chemical balance in the soil. It is done regularly to ensure that the detoxification process is complete.

6. The technique of extraction and separation

In this method, the technique of solvent extraction is used. An extracting agent is mixed with the contaminated soil. The extraction agent is mainly an organic solvent. This method can be applied in the removal of heavy metals in the soil, such as arsenic, copper, lead, cadmium, among others.

It can also be used in the removal of hydrocarbons and halogenated hydrocarbons. The impurities in the soil are mainly located in a finer and coarser part of the soil, such as the hummus. Removal can be based on the separation of the particles of soil in fraction using the principle of the gravitational pull of different particles.

This method can deal with various types of organic contaminants, including phenol, oil and its products, and polychlorinated hydrocarbons. The microbes are collected, cultured, and used to treat the environment. Before treatment, the soil is excavated and treated before standard agricultural techniques are applied.

Solid wastes should be treated and discarded properly. Excess wastes by man and animals pose a disposal problem. They should be treated before dumping them through physical, chemical, and biological means until their hazardous levels to the environment are reduced to the minimum requirement.

Open dumping is the most commonly practiced technique. Nowadays, controlled tipping is followed for solid waste disposal. The surface so obtained is used for housing or sports field.

Try to use biodegradable products as much as possible. Even if they’re thrown away, they will break down naturally and not cause any toxic chemicals to go into the soil.

People should be trained regarding sanitary habits. Ex: Lavatories should be equipped with quick and effective disposal methods.

People should be made aware through informal and formal public awareness programs on health hazards and environmental education. Ex: Mass media, Educational institutions and voluntary agencies can achieve this.

The chemicals and pesticides like DDT, BHC, etc., which are fatal to plants and animals, should be banned. Nuclear explosions and improper disposal of radioactive wastes should also be banned.