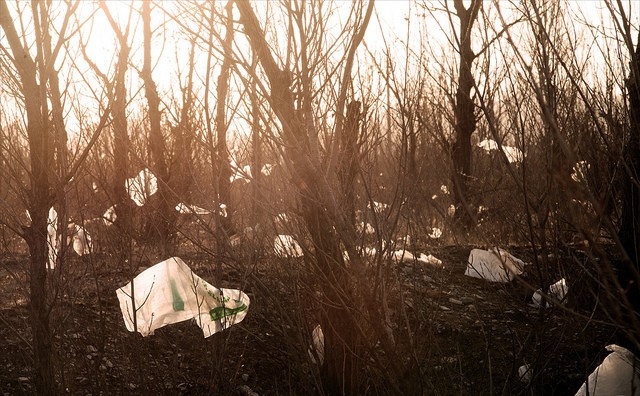 Plastic bags are everywhere in our environment. When we go to purchase our groceries, we use plastic bags because they are convenient. In fact, in our modern lives, it has become part of us. However, the convenience of these plastic bags come at a very high cost to the environment and negatively affects human health.

25+ Powerful Reasons Why Plastic Bags Should Be Banned

Below are some of the 25+ reasons why plastic bags should be banned from our cities.

1. Plastic bags pollute not only our water but also our land

Plastic bags are usually lightweight, and as such, they can travel very long distances by either water or wind. The wind blows these plastic bags and trashes a whole area. These litters get caught up in between trees, fences, and floats in water bodies, thus moving to the world’s oceans.

2. The plastic bags are made from non-renewable sources and on this account, highly contribute to climate change

Most of the plastic is made of polypropylene, which is a material manufactured from petroleum and natural gas. All of the materials are non-renewable fossil fuel-based materials, and through their extraction and even production, greenhouse gases are created, which further contribute to global climate change.

See also  How Many Amps Does a LED Light Bulb Draw? (Explained)

3. A lot of energy is used in producing these bags

4. Plastic bags do not degrade

In truth, petroleum-based plastic bags never degrade. Instead of the plastic degrading, it is broken down into small tiny pieces that are swept down and end up in the oceans, which are then consumed by wildlife. Currently, approximately 46,000-1,000,000 plastic fragments are floating within every square mile of the globe’s oceans.

The plastic bags are filled with toxic, harmful chemicals that include estrogen-like substances.

An Environmental Health Perspectives report disclosed that the plastic has hormone-mimicking qualities, and the plastic products released chemicals that mimicked estrogen.

This is dangerous because it means that disrupt how hormones, such as estrogen and others, behave in our bodies, causing a hormonal imbalance that can have severe effects on our health.

6. Plastic bags are harmful to wildlife and marine life

Birds, animals, and marine life such as sea turtles and fish often mistake the plastic bag and other plastic materials for food and consume them.

What happens once they consume these plastic materials is that their digestive system gets congested, leading to the development of health infections and death due to suffocation. The animals may also become easily entangled inside the plastic.

A study found that almost 35 percent of turtle deaths are caused by the animals ingesting plastic, Green Tumble reports. As per ABC News reports, a 2008 crocodile autopsy in Australia found 25 bags in its stomach.

According to a report by National Geographic, nearly every single seabird is eating plastic, as plastic that’s thrown away is found in 90 percent of them.

As the Ellen MacArthur Foundation reports, if we don’t slow down the production and waste of plastic bags, the future looks grim: by the year 2050, there will be more plastic in the ocean than fish.

There are some chemicals from the plastic bags which can disrupt the normal functioning of hormones in the body. Most plastic fragments in the oceans like plastic bags have some pollutants such as PCBs (polychlorinated biphenyl) together with PAHs (Polycyclic aromatic hydrocarbons), which are hormone-disrupting.

Once the marine animals consume these chemicals, they move through the food web then later into the humans who consume fish together with other marine animals. The chemical materials bio-accumulates in the sea animals and fish system as they are exposed to them in the ocean waters.

When humans prepare them, they consume all these chemicals affecting their healths. They could develop cancers or other serious conditions.

8. Plastic bags are expensive and hard to clean or remove from the environment

The cost of plastic bag cleanup is around 17 cents per bag; thus, on average, the taxpayers end up paying about $88 each year just on plastic bag waste.

Cities and other jurisdictions spend millions of dollars each year to maintain the landfills. Therefore, taxpayers are spending their money on the storage of plastic bags forever.

These plastic bags also cost 3-5 cents each. Thus, the plastic considered free is not free, after all. Individuals pay a lot to purchase them and even for reusing them. For this reason, plastics should simply be banned.

Several costs are attributed to the production of plastic bags. A prime example is a production and environmental costs.

One of the biggest problems with plastic carryout bags is the huge volume of bags being used. In 2008, according to the U.S. Dept. of Commerce, the United States consumed 102.1 billion “polyethylene retail carrier bag” (PRCB’s) in one year what we call plastic carryout bags.

11. Plastic bags are not easy to recycle

Plastic bags are said to present a significant challenge in terms of recycling. Recycling facilities do not have the capacity to recycle plastic bags and thus do not accept them. Therefore, the actual recycling rate for plastic bags is around 5%.

12. Consumers will not recycle plastic bags

The true way to dispose of plastic bags is to recycle them. According to the latest stats from the U.S. Environmental Protection Agency (EPA), only about 12% of plastic carryout bags are recycled.

13. Plastic carry bags are disposable rather than reusable

Plastic carry bags are designed and manufactured to be disposable rather than reusable. Thin-film plastic carryout bags are less than 2.25 mils in thickness.

Some are reused a few times, but the majority is tossed immediately. 88% of plastic bags are disposed of improperly, and only 12% of plastic carryout bags are recycled according to the EPA.

Plastic bags can cause serious problems in other ways. Eventually, the bags will blow around until they are caught by stormwater drains and end up clogging water drainage channels and sewers.

15. Plastic bags tend to last more; perhaps forever and we even use so many of them

Plastic bags never degrade completely, which shows that as more of them are produced by companies, more are introduced into the environment.

16. Even if we did decide to recycle plastic bags, these materials still end up in oceans and landfills

Municipal solid waste (MSW) includes all residential, commercial and business trash hauled away each week by the garbage man of which 18% was a plastic waste, not just bags.

Reportedly, after the recovery of materials in the waste stream by recycling and composting, more than a hundred million tons of MSW were discarded, of which 18% were plastics, and about 3% of plastic waste is plastic bags, and those were placed in already over-burdened landfills.

18. These plastic bags are impacting the environment negatively, in that they are making the Great Pacific garbage patch bigger every minute

Most of the plastic materials once released into the environment find their way into waterways, and once they are there, they dumped into oceans.

The Great Pacific Ocean is one such area negatively affected by all the plastic material. The more they are thrown into the oceans, the more they increase, causing the garbage patch to increase in size.

19. Bans should be adopted because they are greatly effective at reducing big plastic waste

China banned plastic bags, and four years later, the amount of plastic bags thrown into the environment had reduced by 40 billion. Similarly, if the U.S. bans plastic bags, there would be fewer landfills.

Most of our cities are not clean, especially Indian and most African country streets, because people don’t care to know where they throw their garbage.

Plastic bags are an eye-sore and unsightly litter along our highways. They do it in water bodies, streets, and in landfills. These wastes litter our streets, making them look ugly, affecting their aesthetic value.

When we ban plastic bags, we keep our environment clean and, at the same time, send some message globally about the importance of environmental protection. People learn that banning plastic is for a reason, and they can take up such important information.

They can subsequently begin to understand that plastic causes some negative effects, and the environment and humans need protection against them.

22. With a ban on plastic bags, there would be improved technology which would boost other businesses

With such a ban, the society would be required to produce some more sophisticated bags. Great manpower will be required by the manufacturing factories so they can make eco-friendly and greener materials.

These plastics cost a lot of money because the final costs account for the total production costs from their manufacture using petroleum to when they will be thrown away.

24. People are ready for the ban, and thus, it should be adopted

People have seen how many plastic bags have adverse effects on their health and environment, and thus, they have desired and opted for change. This change is the use of eco-friendly materials.

25. Through banning plastic bags, the people will learn to support local workers together with green industries

There are several alternatives to plastic bags. Only when these plastic bags will be banned, people will move towards greener alternatives. This is needed to support local industries that produce green products.

26. People can opt for manufacturing reusable bags so that they create sustainable products

27. Other nations are banning the use of plastic because they have noticed that it is causing harm to the environment and human health

Currently, over 40 nations, together with municipalities around the globe, have instituted plastic bag bans. Other nations should follow suit to reduce the overall environmental implications.

28. UNEP secretariat has recommended a ban on all plastic bags worldwide

This means there are a thousand and one reasons for the ban on plastic bags. If some governments cannot ban them completely, then they can make people pay heftily for using plastic bags to discourage their usage.

29. Through the banning of plastic, cities in various nations can begin to focus on other bigger waste diversion challenges

Cities have had set targets that they are supposed to achieve, like in Toronto, Canada, where the city council is required to achieve 70% waste diversion by 2026. People cannot achieve the set target because most households do not have green bins.

If there are plastic bag bans, then the city council can place their focus and attention on getting green bins to various apartment buildings and then meeting waste diversion targets.