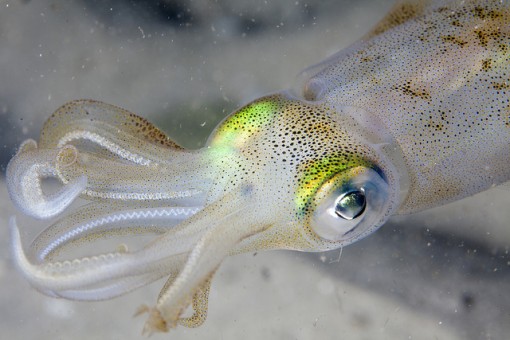 Oceans cover nearly three fourth of the earth’s surface and supply roughly 97% of the earth’s water supply. They are by far the largest animal habitat on earth. Different species of plants and animals can be found in the oceans. Oceans are so huge and deep, that it is impossible for even scientists to explore them. Plants inside the oceans provide food, home and protection for ocean animals. Fish and other animal species can be found at all depths of ocean, from the surface to the bottom or sea floor.

The world’s oceans are home to many different animals – from the dangerous to the sweetly beautiful. Fish, sea mammals and crustaceans all share the ocean ecosystem; the different temperatures of the water being the boundaries of their worlds. There are namely 5 oceans in the world and all are connected to each other. A person who studies ocean life is called marine biologist. Below is the list of 20 ocean animals.

1. Mola Mola: The Mola Mola is more commonly referred to as the “Ocean Sunfish.” It is a large and bony fish that has a flatten appearance. The average weight of the Mola Mola is about 1000 kilograms. It is common to waters that are warmer than average, making it a frequent sight in tropical and temperate parts of the world’s oceans.

2. Blue Marlin: You can spot a Blue Marlin easily as they are also called a “swordfish” due to their lower jaw having a spear like bone growth on it. These are large and powerful fish that can grow to weigh over 900 pounds and reach 14 meters in length. Blue Marlins are known for their speed in the water. They are common to warm waters, so can be found near the surface. Contrary to popular belief they don’t spear their prey. They use their “sword” to cut through schools of fish and then swim back to eat the fish they cut in half.

3. West Indian Manatee: It can be hard to believe that these giant sea mammals can reach 1,600 pounds and over 13 feet in length while only eating plants, but the West Indian Manatee is a pure vegetarian. They have no natural predators and are not aggressive. Their unusually graceful swimming style fed rumors of mermaids in olden times. Manatee can stay underwater for up to 15 minutes, and they are also capable of short bursts of speed that can hit over 15 mph in the water. They are common to warm waters.

4. Chimaera: This is a deep ocean bottom feeding fish that looks like a hybrid of a fish and a squid. It has an unusually long head with a flattened snout. That snout is what they pass over the ocean floor like a metal detector. They can pick up the electrical impulses of their food that is hiding in the bottom sand.

6. Conch: You wouldn’t recognize the conch when it is alive and in water, their famous shell that everyone likes to use as a trumpet, or that you hold up to hear the ocean – is covered in algae and plankton in real life. The conch is an invertebrate. The shell protects the soft animal inside that uses suction to propel itself along the ocean floor and reefs.

7. Xiphosura: More commonly known as the Horseshoe Crab, these Chelicerae are found only in the colder waters of the ocean along the North Atlantic coastline. They have a shell that can reach almost 2 feet in length. The shell doesn’t grow with them, they molt it like a snake sheds their skin.

8. Blue Ringed Octopus: As you can guess, this octopus gets its name from the blue rings that mark its body, but it is known for other reasons. This is one of the smallest of the species, and the most deadly. When fully grown it can barely reach 10 inches in length, but has enough poison in it to kill a man with one bite.

9. Grenadiers: This is a frightening species that lives in the depths of the ocean, spending a lot of its time as close to the ocean floor as possible. It has an interlocking set of fangs in the front, small fins, and a rat like tail. What makes this fish so unusual is the nature of its swim bladder. While it does use it for flotation, it can also beat the bladder to create a drum-like sound to attract mates.

10. Sharks: While there are many types of sharks, they all share certain characteristics. They have keen vision, especially at night or in the dark. Their sense of smell also beats that of a human by being 10,000 times more sensitive. What you may not know from the movies is that sharks have to bite a creature to know whether or not they should eat it. This gives them an unusually aggressive approach to meal selection.

11. Giant Squid: Once thought to be a mythological creature, now we know they really exist but are rare. These deep sea dwelling creatures prefer the coldest of water, and they can reach over 60 feet in length. They are not naturally aggressive, and many suspect that the stories of them attacking boats comes from the boats attempt to fish them.

12. Pacific Black-dragon: Half-snake and half eel, these are fearsome looking scaled creatures that can grow up to two feet in length. One thing that makes this species so unusual is that the males are born with no way to eat. They live only long enough to reproduce with a female.

13. Whales: Considered to be one of the largest mammals on earth, there are many types of whales – some of which are quite small. Different species of whales are common to different temperature and depths of waters, with the Blue Whale being the one best known as its migratory path covers most of the globe.

14. Dolphins: These highly intelligent mammals swim in pods that are mostly defined by family relations. While people have a perception of dolphins as being exceptionally kind and gentle, that is not really true. They are capable of great feats of altruism, but are also known for their aggression.

15. Clown fish: One of the most recognized types of tropical fish, this is the star of the movie “Little Nemo.” These fish prefer warm waters and are found around coral reefs. Their bright colors help to hide them among the parts of the reef from predators.

16. Manta Ray: Rays are closely related to sharks and have cartilage instead of bones. Some rays are tiny while some are really big. The largest rays are Manta rays. They have short tail, flat body with eyes on top of their heads. They can be over 22 feet wide and weigh up to 3000 pounds.

17. Urchin: The sea urchin lives on the sea floor, move very slowly along the seabed and have sharp spines pointing out in all directions. They are invertebrates. Invertebrates are animals that do not have a backbone and their body temperature depends on the temperature of the environment. There are roughly 700 different species of urchins worldwide and most of them have venomous spines.

19. Turtle: Sea turtles like Loggerhead, the Green Turtle, the Leatherback, the Flatback can be found in shallow coastal waters of warm and temperate seas. Except green turtle, all sea turtles are meat eaters and survive on lobster, crabs, shellfish, shrimp, jellyfish, Man-of-War and small fish. They are generally 2 to 6 feet long and weigh between 78 to 1900 pounds. All sea turtles are considered threatened or endangered.

20. Cuttlefish: Cuttlefish is another marine animal that is approximately 1 feet long, has 8 arms and a soft body. It is a fast swimmer and have the ability to change color and patterns of their skin to blend with the surroundings and confuse predators. Cuttlefish, along with octopi and squid, are called cephalopods. Cuttlefish eat worms, crabs, fish, shrimp, snails, small mollusks and use poison to kill their prey.

Apart from the above, there are still lot of other ocean animals like Brittle Star, Clam, Crab, Copepod, Coral, Eels, Gastropods, Harp Seal, JellyFish, Krill, Man-of-War, Salmon, Sand Dollar, Tuna and many more.