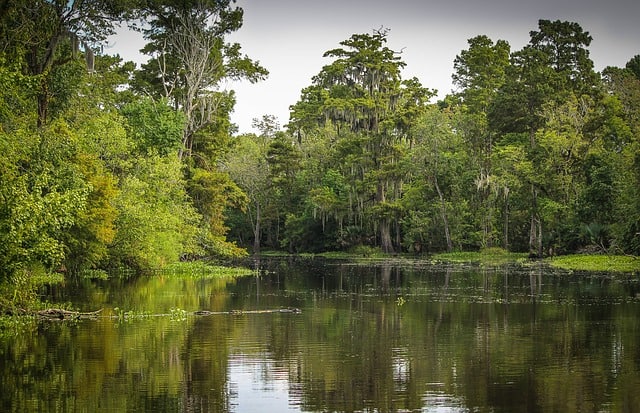 According to WWF, “wetlands are the link between land and water and are some of the most productive ecosystems in the world.” They are places that are often covered by water either fresh or salty or somewhere in between and can either be permanent or seasonal. Wetlands can either be filled with moss, shrubs, grasses, or trees.

Wetlands are the world’s biome that is in charge of replenishing the groundwater aquifers by filtering, cleaning, and storing water, and providing a home to thousands of animal and plant species including wildlife. Wetlands are hence crucial for food security, carbon storage, water filtration, and stormwater storage. To learn more about this, here are 15 amazing facts about the world’s wetlands.

By definition, a wetland is a place where the land is covered by water either permanently or seasonally. It can be fresh or salty water or even somewhere in between.

For a place to be called a wetland, according to scientists and environmentalists, it has to soak or filled with water for at least some good duration of the year.

Fact 2: Wetlands are the most biologically diverse of all ecosystems – and a wide variety of species live in wetlands.

There is more animal diversity in the wetlands compared to any other biome in the world. Wetlands are thus touted for their high richness in biodiversity with thousands of numerous different species that live in them.

Because wetland biomes remain humid and moist for the most part of the year, it is a perfect place for many species including a wide variety of plant life and birds such as geese, kingfishers, ducks, ibises, and sandpipers.

Up to 150 different types of birds depend on wetlands for survival. In America, for example, 80% of all the breeding birds require swamps for survival. Mammals like sloths, waterbucks, tigers, bears, deer, bobcats, hares, elks, otters, beavers, and capybaras, and different kinds of fish also live in wetlands.

They are also preferred because they are suitable for feeding grounds, homes, and breeding grounds for countless species. The continued decomposition of organic matter from the small particles of dead stems and leaves provide rich nutrients that support the food chain for hundreds of insects, mammals, worms, birds, snails, amphibians, and reptiles.

Llanos de Moxos, located in Bolivia, is the largest protected wetland in the world. It is more than 17 million acres and borders Peru, Bolivia, and Brazil. Most of it is a tropical savannah, with repeated cycles of droughts and flooding.

Fact 4: More than 19,500 animal and plant species depend on wetlands for survival globally

As it has been mentioned before, Wetlands are the most biologically diverse of all ecosystems. They cumulatively accommodate more than 19,500 animal and plant species.

This is according to a recently published report and working document by the Ramsar Convention Global Wetland Outlook after a meeting held in October 2018.

Wetlands can hold pollutants such as heavy metals and phosphorous and can even aid in converting dissolved nitrogen into nitrogen gas. Wetland areas can also break down suspended solids thus playing a vital role in neutralizing harmful bacteria.

During heavy rains, wetlands can absorb fertilizer runoff making it a fundamental asset in agricultural areas and can help address the problem of eutrophication and dead zones. Therefore, wetlands are commonly referred to as “kidneys of the landscape.”

In other words, wetlands clean, filter, and store water thereby acting as the “kidneys” of the earth’s ecosystems. Surprisingly, wetlands can remove up to 60% of metals contained in the water, trap, and hold up to 90% of sediment from runoff and get rid of up to 90% of nitrogen. They do this mainly through uptake by plants and percolation through the soil.

Fact 6: Wetlands can be used for wastewater treatment by municipalities

Due to wetlands’ effectiveness as natural water filters, they are now being exploited as low cost, convenient, and effective options for municipal wastewater treatment.

It is seen as an ideal option because it creates a subsurface flow system owing to the permeability of the soil, gravel, sand, or rock below the earth’s surface. This feature aids to avoid the odors and nuisance associated with wastewater.

Some municipalities are thus creating or using already existing wetlands to supplement their wastewater treatment plants for purifying wastewater. Aside from purifying water for domestic consumption, wetlands can help clean stormwater runoff. Furthermore, wetlands ecosystems tend to bring into existence a wildlife habitat.

The area of earth covered by wetlands is very small, but their carbon-capturing abilities are amazing. Wetlands, especially peat wetlands, can store up to 50 times more carbon (the heat-trapping gas) compared to rain forests thereby helping to combat climate change.

This means that they only cover about 3% of the earth’s surface and store up to a third of the world’s total carbon.

Particularly, wetlands filter out the matter contained in animal and plant waste and locks them away. Besides, wetlands have very long lifespans and this means they qualify as sustainable and long-term systems of keeping carbon out of the atmosphere.

Fact 8: There is an international treaty for wetland protection known as the Ramsar Convention

The Ramsar Convention is an international treaty primarily focused on the protection of wetlands. Established about four decades ago in the year 1971 and effected in December 1975, it currently protects more than 2,000 wetlands spanning more than 475,000 acres.

The protected areas are designated as Wetlands of International Importance and are mainly guarded against the threats of agriculture, climate change, pollution, development, and aquaculture.

Fact 9: We have a World’s Wetlands Day!

Another fact about wetlands that may come as a surprise to many is that it actually has a day dedicated to its celebration. It is known as World’s Wetland Day – celebrated annually on the 2nd of February. The day aims to create awareness about the significance of wetlands across the globe.

It is a proven fact that wetlands from where water meets the land because they usually serve as the link between water and land. As an example, most wetlands exist in places such as marshes and peatlands, rivers, floodplains, rice-fields, flooded forests, lakes, and deltas.

It is approximated that Africa’s wetlands ecosystems cover an area of more than 131 million hectares. They include peatlands, flooded forests, rice-fields, mangroves, and river basins.

Fact 12: Half of the Earth’s wetlands are Peatlands

Peatlands include areas such as permafrost tundra, peat swamp forests, bogs, moors, and mires. Surprisingly, half of the earth’s wetlands exist in these areas, covering an area of 3% of the total global land, according to Wetlands. They are found all over the world but common in African countries.

The Democratic Republic of Congo (DRC), Zambia, and Uganda are the countries with the largest areas of peatland. Uganda alone, for instance, has a total permanent swampland area cover of 64,000 hectares.

Fact 13: The main ecosystems in the Arctic are wetlands

In the Arctic, the main ecosystems are wetlands accounting for approximately 60% of the Arctic’s total surface area. It not only adds to the many facts about wetlands but also serves a vital role in maintaining global diversity.

This is because the wetlands in the arctic store huge amounts of greenhouse gases and offer unique habitats for a variety of animals and plants. It offers irreplaceable feeding and breeding grounds for hundreds of migratory species.

Additionally, they act as the main source of livelihood for the local indigenous people who depend on the waterfall for hunting, wetlands for fish, and pastures for grazing.

Wetlands collect and store water thereby preventing flooding. Similar to their reference as the “kidneys” of the planet owing to their water filtration capabilities, they are also referred to as the planet’s “sponge.” In other words, wetlands are excellent at absorbing floodwater and freeing it slowly into the ground.

According to EPA, up to 1.5 million gallons of floodwater can be stored in an acre of wetland thereby qualifying as a natural flood control mechanism. As such, many wetlands have continued to serve as “reservoirs” for excess stormwater thus preventing flooding.

The increasing initiative to protect wetlands, to a great degree, is because they are crucial for keeping rivers at a normal level. This helps to keep at bay the potential of flooding and extreme events such as hurricanes and typhoons.

Fact 15: The world largest wetlands is the Plantanal

It extends across Brazil, Paraguay, and Bolivia and receives runoff from the surrounding highlands then discharges it slowly into the Paraguay River.