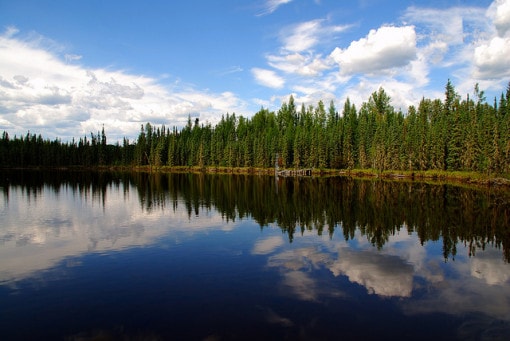 A wetland is typically an area of land that is completely saturated with water, whether all throughout the year or only during certain seasons. Because these areas of land are covered in water as well as a variety of different land and water dwelling plant life, they are well known to have rich and distinct ecosystems from, for instance, waterways or the dry land. As a direct result of this rich ecosystem, wetlands are especially important to the world because they are the homes of some of the most endangered wildlife and plant life in the world. Wetlands are important to us as they remove pollution, recharge groundwater supplies, control floods, and provide home for variety of plants and animals. Wetlands include swamps, marshes, bogs and fens.

According to Wikipedia, “A wetland is a land area that is saturated with water, either permanently or seasonally, such that it takes on the characteristics of a distinct ecosystem. The primary factor that distinguishes wetlands from other land forms or water bodies is the characteristic vegetation of aquatic plants, adapted to the unique hydric soil.“

Wetlands are the most productive habitats on the planet as they contain high number of plant and animal species including mammals, bird, fish and invertebrates.

However, unfortunately some of the world’s wetlands are under threat because of human activity. Very often, wetlands are drained and then houses and other buildings are built on the land that used to house diverse species of birds, fish and amphibians.

For many of us, water simply flows from a faucet, and we think little about it beyond this point of contact. We have lost a sense of respect for the wild river, for the complex workings of a wetland, for the intricate web of life that water supports.
– Sandra Postel

There are a number of different types of wetlands that occur all over the globe. They are usually split into four distinct categories with further distinctions depending on location and other factors.

Marshes are wetlands that are always inundated, rather than being submerged under water just during the summer or a couple of months over the year, for instance. Marshes can be freshwater or saltwater and amount of water in the marsh can change with the seasons. They boast a great variety of vegetation that has adapted especially to live in saturated soil. There are a number of sub-categories of marsh, including freshwater, saltwater, inland and coastal. Each of these have their own distinct ecosystems and can be found all over the world. Marshes wildlife include beavers, alligators, newts, shrimp and turtles.

Swamps differ from marshes in that, typically, they are dominated by woody plants (rather than soft-stemmed plants). Some of these trees are often harvested by people from all over the world to make timber and to build their homes, which can affect the ecosystem drastically if too many are taken without being replaced with new saplings. Swamps are typically the home to various birds and fish as well as smaller creatures. Swamps like Everglades in Florida are found in low-lying areas near rivers or coastal areas. There are two main types of swamps: forested swamps and shrub swamps. Swamps are home to variety of animals like snakes, bobcat, alligators, beaver, large diversity of birds.

Bogs are characterized by more acidic waters and spongy peat deposits as well as a covering of sphagnum moss. Unlike marshes and swamps, bogs tend to get their wetness from precipitation rather than waterways such as streams or runoffs from rivers. These wetlands are fantastic for preventing downstream flooding since they absorb precipitation as it falls and prevents the swelling of rivers and other waterways. There are two sorts of bogs: northern bogs and pocosins.

Fens are, like bogs, peat-forming wetlands, although they usually get their wetness from ground water rather than precipitation, which means that they are slightly less acidic. This means that they tend to support a greater array of wildlife, from plants to fish to birds and everything in between. Like bogs, fens are beneficial because they can help prevent the flooding of land elsewhere, since they soak up water from the ground and prevent it from seeping anywhere else.

Since there are a number of different types of wetlands, there are a number of benefits that each one offers. Not all of them offer the same benefits to animal life, plant life and even humans as others, but all of them are essential and it is very important to protect both them and the life that they support, some of which cannot be found anywhere else in the world.

Most importantly, wetlands are best known to prevent flooding. Because the plant life and the soil in all different sorts of wetlands is used to being saturated with water, it can hold onto the water better than other areas (for instance, of forest or farmland). Water that falls as precipitation or that flows down from mountains in streams or that is present in the ground is caught and held in wetlands, which prevents other areas, perhaps further downhill, from flooding. This can have a positive impact not only on the environment as a whole, but is very useful for people who have build their settlements next to rivers or other waterways that might otherwise have been prone to flooding.

Wetlands release water back into waterways and surrounding areas – although they do so slowly, which is why they are so good at preventing flooding. This water, after having been in areas that are so rich in various different sorts of plant life, is filled with vegetative matter that then finds its way into rivers and streams. This vegetative matter is absolutely essential for sustaining the fish that live in these waterways.

The releasing of vegetative matter also provides an essential in the amount of nutrients, seeds and other matter going into streams and rivers, not to mention other creatures. This can help to stabilize, rejuvenate or enrich ecosystems in areas around wetlands.

Many animals have wetlands as their homes. Birds such as herons, fish and amphibians all make their homes in these sorts of places. They offer the perfect place for animals to be safe and hidden from predators – perhaps from the air – as well as providing a great deal of diverse foodstuffs such as grasses, mosses and other plant life. Amphibians may hunt and scavenge away from the wetlands, but they always return to find a good place to mate and breed, because wetlands offer a lot more safety than other places.

As a direct result of having wetlands, the water in the surrounding areas will be a lot cleaner and purer than in other areas. This is because the water is filtered through the wetlands. Fish and other animals may eat vegetation, plants may strain out rubbish that may be in the water because of humans or things like twigs that have fallen from nearby trees, meaning that these things do not make it into streams or rivers further down the line. Wetlands decompose vegetative matter (for the most part – some of it makes its way into streams and rivers to provide food for fish) and even convert various chemicals to make the water even cleaner for the creatures that live both in the wetland and in other water systems. This makes them one of the most productive and critical natural filtering systems in the world.

Sediment is a natural problem that usually originates in rivers. As the water flows past drier earth, it will sometimes sweep sediment away. This sediment will eventually end up in the sea, which is not hugely problematic, but erosion can be an issue. With earth disappearing, animals may find they have less space to hunt, mate or live. Wetlands act as a sort of erosion control. Emergents – plants that are firmly rooted in the ground but that have stalks that rise up out of the water into the air – grow almost exclusively in wetlands, and it is this that slows the flow of water. This means that the strength of the water is lessened and erosion occurs less powerfully in these sorts of areas, as well as in lakes and rivers where the water is slower.