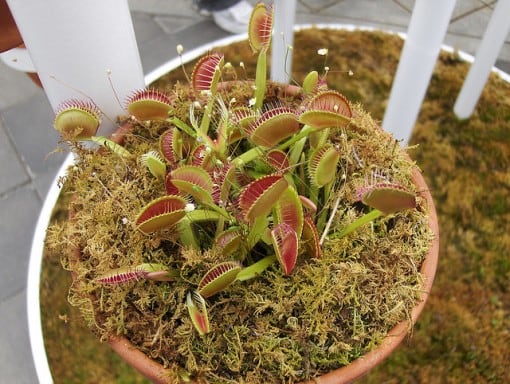 Endangered plant species can be found all over the world. No matter where they are located, they all share one common factor that is thought to have put them onto the endangered list. None of these plants, flowers or trees is thought to have any commodity value to the human race. They may have in an early era, but their lack of usefulness has not encouraged efforts to promote conservation. In many areas, the effects of climate change, deforestation and land development have also played a role in the demise of these species.

The Endangered Species Act(ESA) was enacted by congress and is one of the dozens of United States environmental laws passed in 1973.

1. Baobab Tree: This tree is an unusual life giving tree. While it may only sprout leafs for 3 months of the year, it stores water in its broad and twisted trunk. The peoples of Madagascar, Africa and India would often build their homes among its roots to survive the dry seasons. Climate change, and over development have destroyed its natural habitat.

2. Monkey Puzzle Tree: Native to Chile, it seems odd that the national tree would be on the endangered list, but development and loss of its natural habitat have harmed its wild growth. It was also collected as a popular yard ornament too. Fortunately, it does grow well in conservation, but also is not a high priority endangered plant.

3. Dragon Tree: These are the large and striking trees that form many people’s images of the African savanna. The trees can grow for thousands of years. As old as they can get, they are no match for severe drought, climate change and development. They are steadily disappearing from the continent.

4. Bois Dentelle: Few people are aware of the existence of this delicate plant with the hanging white blossoms. It has never been highly valued as a commodity, and outside of Mauritius, it is rarely spoken of. The cloud forest where it grows has been invaded by many species of plants that are crowding out this small flower. The Bois Dentelle is one part of what makes the natural world beautiful that is steadily being crowded out.

5. Cork: This oak tree type is the tree where wine corks, and other items made from cork materials come from. While many environmentalists believed that advocating for alternative wine-stoppers would save cork, the reduced demand for the tree bark has instead begun to cause its demise. With no demand for the bark as a commodity, there is no interest in preserving its habitat or the tree itself.

6. Underground Australian Orchid: This orchid gets its name from the obvious growth of the flower underground, it is more a low ground covering than directly in the ground. Over development and a drought, plus pollution, have put this delicate blossom on the endangered list.

7. Venus Fly Trap: This was a favorite plant of many a child, but the plant itself is steadily disappearing from its natural, tropical habitat due to deforestation. It is a carnivorous plant and plays an important role in controlling insects to promote the healthy growth of surrounding vegetation. Since it has no value as a commodity, never becoming more than a novelty item, there is little effort to save it.

8. Baseball Plant: It can surprise people to find out that this popular yard plant is endangered, after all, it is easy to go and purchase from a local home goods store. The issue is that its wild habitat is being destroyed, and not enough conservation care has been taken to replace the ones poached or collected for commercial stock. These plants aren’t raised for sale, but are harvested from the wild.

9. Green Pitcher Plant: This one is carnivorous like the Venus Fly Trap, but it never captured the public imagination in the same way. It is native to the American South, and is an herb. It is valued in gardens to help protect other plans from insects. Over-development has been the major cause of its disappearance as they grow in groves and don’t do well as single plants.

10. Welwitschia Mirabilis: Native to the deserts of South Africa, this is a 2 leaf plant. The leaves grow in length and tangle as the plant ages. The known specimens are estimated to be over a thousand years old, and can get so large they can cover a 6 foot square area. They were destroyed as a part of land development, and climate change is slowly getting rid of the last of these plants.

11. Snowdonia Hawkweed: Once thought to be completely extinct, seven small groups of this plant were spotted growing in Snowdonia in 2002. It is considered to be one of the rarest plants on earth. Snowdonia is located in Wales.

12. Rafflesia: Another flower noted for the size of its stench, it also boasts some of the largest petal flowers in the world, comparable to the size of a small chair. It can be confused with the Titan Arum as it is also known as a Corpse Flower. This flower has an unusual popularity with collectors. Poaching, collecting, lack of conservation and destruction of its natural habitat is speeding its disappearance.

13. Titan Arum: Also known by the less politically correct name of “titanic penis,” it is the world’s largest flower. Growing in Sumatra, it also is known as having the biggest inflorescence of all the flowers on earth. Its common name is the Corpse Flower for its unique and overpowering stench.

14. Black Bat-Flower: Proper name – Tacca Chantrieri, was poached and collected to near extinction. The blossoms of the flower are large, reaching almost a foot in diameter. The velvety petals are surrounded by a whisker like froth that can reach to the ground.

15. Dendroseris Neriifolia: Also known as the Chile Plant, this plant is native to Chile, but has nothing to do with the peppers. It is so endangered, there is only one documented plant left growing in the wild. It is a hard plant to conserve as it only grows in this unique biome.