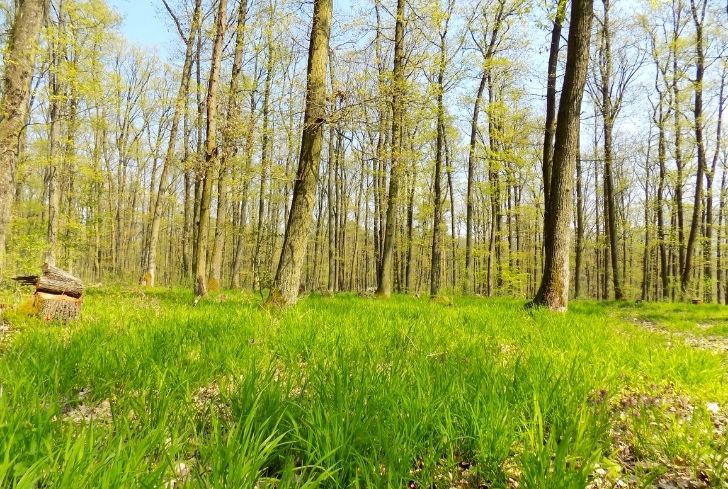 The natural Earth is made up of numerous biomes, or areas defined by regional plant and animal life. Each biome is dependent on a number of factors that determine how the local flora and fauna adapt over time. Deciduous forests are biomes that are classified by the seasonal weather patterns they experience – in that they go through all four seasons, with trees losing their leaves each fall and winter.

The deciduous forest biomes lie between regions and the tropics.  This is why the air masses from both the biomes contribute to the changes in climate in this biome.

Because the trees in a deciduous forest lose their leaves each year, animals and other plant life in these regions have developed special ways to deal with the absence or presence of leaves above them. With different amounts of sun and shade over the course of a year, the entire ecosystem of these areas has developed a number of ways to adapt, from hibernation to seasonal flowering patterns.

Since deciduous forests are defined by the fact that their trees lose leaves every year with the change of the seasons, it goes without saying that the climate of most deciduous forests is not extreme, but does change depending on the time of the year. These areas will experience four clearly defined seasons a year, and each time of the year promotes a range of different activities in both the plant and animal life. Deciduous forests are also sometimes called Temperate Broadleaf Deciduous Forests, which suggests that they are often found in temperate climate zones.

Deciduous forests are full of the quintessential fall trees, those that change color before their leaves drop entirely during the winter. The deciduous forest in the Northeastern United States attracts millions of people each year who wish to experience the changing leaves.

The deciduous forest regions have four seasons. The temperature varies from cold winters to hot and dry summers. These deciduous trees shed their leaves each fall. As leaves decay, the nutrients contained in the leaves are absorbed by the soil. The leaves change color in autumn, fall off in winter, and grow back in the spring.

The tree life in a deciduous forest is affected by the region’s weather. Milder winters will typically promote a larger diversity among tree species.

While deciduous forests are mostly found in temperate zones that experience the four seasons, there are also some to be found in tropical, sub-tropical, and savanna regions.

Deciduous forests occur in locations all over the world, including in both Northern and Southern hemispheres. However, the world’s largest deciduous forests are typically concentrated in the Northern Hemisphere, with North America, Europe, and parts of Russia, China, and Japan.

Deciduous forests tend to thrive in areas that have mountains, and particularly in places that have a range of types of soil.

Some famous deciduous forest locations are:

Because deciduous forests are found all over the world, the temperatures found in each will vary depending on location. However, since trees in these forests lose their leaves once a year, the average temperature of a deciduous forest is typically around 50 degrees Fahrenheit (10 degrees Celsius), with winters dropping much colder.

Deciduous forests must have a period without frost on the ground for at least 120 days, but in some areas, this is as much as 250 days without frost cover a year.

Rainfall will vary depending on the location of forests, but in general, deciduous forests will require enough rain to promote new leaf growth on trees and to provide enough moisture for the lower plants and animals under the tree despite canopy cover. Rain falls around the year in deciduous forests, and in some locations, snowfall is common for winter precipitation.

Typically, the average rainfall for a deciduous forest is in the range of 30 to 60 inches annually.

The soils of these forests are called Spodosols. They get a lot of rain, and when combined with sand, the water leaches minerals and organic matter downward. This leaves ashy white layers (E horizons). There are two main soil types found in deciduous forests.

Alfisols constitute 10% of the land area on Earth. Alfisols are very common in the Midwestern region and are the most fertile type of forest soils. These are nutrient-rich and fertile soils found in north-central Europe, the north-central United States, northeastern Brazil and southern Australia.

The alfisols are rich in minerals that have aluminum and iron but little calcium carbonate. A cross-section of alfisol soil reveals a layer of silicate clay that has migrated down from the surface. Calcium, potassium, magnesium and sodium ions are found in this area, which is also called the argillic horizon. These soils are moderately leached and do not have a bleached E horizon, but do have clays that accumulate in the subsoils.

The main crops grown in this type of soil are corn, wheat and grapes used to make wine. Alfisols tend to be found in cooler climates than ultisols. The moisture and humidity have caused most of the nutrient found in Alfisols to leach out, leaving behind the clays and oxides.

The leaves that fall from these forest trees, along with other dead organisms, enrich the soil with nutrients, which returns matter and nutrients back into the soil and other trees/plants in the area. This allows the forest to maintain the alfisols nutrient-density.

Ultisols cover about 8% of Earth’s land area, which tends to have a reddish-yellow color owing to a high content of oxidized iron. The soils are much older, acidic and have a lot of clay, but they can be converted to agricultural use by applying lime fertilizer. Ultisols are found in humid tropical regions of the world, such as South America and Africa and the humid temperate regions of the southeastern United States like Florida and Louisiana.

The surface of ultisols is humus-rich, and it has a layer of clay deeper down like alfisols, but it lacks available magnesium, potassium and sodium in the layers that are extensively leached. Kaolin clay minerals and metal oxides are found throughout the layers of soil that give the soil red and yellow (bleached-looking) layers.

Obviously, deciduous forests are home to a number of different tree types, with the majority shedding their leaves each year. However, because these trees lose their leaves, this means that the forest’s overhead canopy changes over the course of the year, which greatly affects the kind of plant life that can survive these drastic shifts of the amount of sunlight and moisture.

The changing colors of tree leaves are one of the most notable features of deciduous forests, as when the temperatures start to cool in the fall, the trees will basically suck the chlorophyll out of their leaves to store for use during the colder and darker winter months.

Deciduous forests are split into different levels depend mainly on plant height. Obviously, trees that grow high will have more year-round access to the sun than some of the lower plants.

Typically anything that grows over 60 feet. This is the highest level of the forest and consists of the tallest trees. The trees are all reaching up towards the sun and competing with each other to get as much sunlight as possible to live and grow.  In a mature forest, this stratum can be very thick with leaves, making it hard to see the sky from the ground.

This layer is lower and closer to the ground and consists of bushes and shrubs. These are shorter than the smallest trees, so need to be able to adapt to different amounts of shade over the year

This layer is made up of those perennial wildflowers and ferns.  You can also find the shortest ground cover or other low lying flowering plants in this layer.

The final and bottom layer of the forest is the ground layer. Basically, anything that exists on the ground level of a deciduous forest. This layer is also made up of the fallen leaves, twigs, and fungi that are decomposing the organic matter.

The yearly change in the amount of canopy cover also affects the animal life of deciduous forests. While there are many animals that thrive in this biome, the presence of humans and industry has affected the longevity of many species.