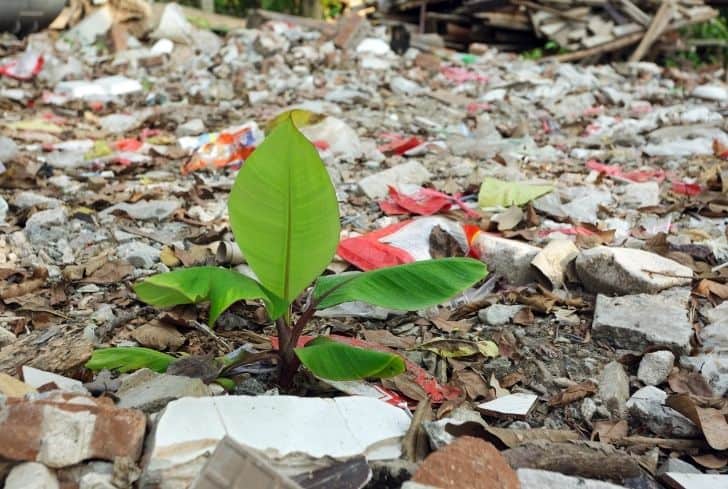 Plants are affected by pollution which comes from a myriad of sources. It could be air pollution, water pollution, land and soil pollution and even light pollution, all of which have adverse effects on plants. This is a detailed explanation of how these pollutants affect plants

Basically, plant pollution is when pollutants and substances that do not naturally occur in the environment, come into contact with plants or are absorbed by plants. A such, plant pollution can come from the air, water, or soil. Plant pollution affects plants in several ways:

Ground-level pollutants like ozone, physically damage the plant leaves, causing chlorosis or an abnormal yellowing of leaves. This results in a deficiency in chlorophyll, meaning the plant will not be able to make its own food or energy. With a higher concentration of ozone, plant leaves will simply die due to too much exposure

A stressed plant cannot flower as it will use all resources it has to fight and survive the threat. For instance, most plants exposed to vehicle exhausts, delay in flowering as they are fighting the emissions

Acidic soils, either from soil pollution or acid rain, create a complex scenario for plants which ends up with the plants being unable to thrive. Acidic conditions accumulate a lot of aluminum ions in the soil, which destroys roots systems and prevents the uptake of important nutrients and ions.

Stomata are the tiny pores on leaves, and they act as sites of gas exchange between the plant and the atmosphere. Pollution impacts a plant’s structure reduces the size of the stomata and when gas exchange is compromised, photosynthesis slows.

In a word, Yes! Plants do a lot in helping fight pollution, mainly air pollution. They help improve the quality of air by absorbing carbon dioxide and releasing oxygen, increasing humidity by transpiring water vapor and passively absorb pollutants on the surface of leaves and on to the plant root-soil system. By removing these toxins, they help humans being breath by increasing the supply of oxygen in the atmosphere and also help fight global warming.

Forests are the other vital elements on earth. They act as the planet’s purification system by absorbing airborne chemicals and releasing oxygen. The Amazon rainforest, for instance, is home to more plants and animals than any other terrestrial ecosystem. The rainforest contains 90-140 billion tons of carbon, which is equivalent to a century of human carbon emissions. It is essential in absorbing carbon dioxide, which would otherwise contribute to global warming and climate change.

How Does Air Pollution Affect Plants?

Air pollution means the introduction of harmful chemicals into the air, like sulfur, nitrogen oxides and carbons. These chemicals cause damage to plants, with the plants physically showing the damage in a variety of ways, for instance through stunted growth, necrotic lesions, and changes in colors. Change in color could be represented by chlorosis which is when plant leaves turn yellow, reddening, mottling or bronzing

Ozone is harmful to the atmosphere as it leads to holes in the upper atmosphere. In doing so, ultraviolet light is able to pass through the atmosphere, causing further damage to plants. Destruction by the ozone in the lower atmosphere restricts respiration, obstructs stomata, prevents photosynthesis and stunts plant growth.

3. Reduced yields and damage to crops

Plants absorb pollutants from the air, making the air cleaner. With a build-up of too many pollutants, plants may fail to grow as they should, including being unable to perform photosynthesis. This, in turn, will mean plants will fail to have fewer yields than they should. Reduced yields especially in agricultural crops will mean hunger for the people and animals, and will also drive prices of such commodities up, destabilizing the economy

With air pollution affecting plants and their leaves, it means they will be unable to absorb carbon dioxide as they should. This means more carbon dioxide will escape into the atmosphere, which will further damage the ozone layer, and cause a build-up of more greenhouse gases. This will also contribute to global warming and subsequently climate change.

How Does Water Pollution Affect Plants?

Plants require specific nutrients, which they get from the soil, water and air. Polluted waters might kill some of those nutrients, further denying the plant the ability to get them.

Water pollution will introduce toxins that are harmful to plants. An accumulation of such toxins in the water will poison the soils even for other crops or plants. This will in turn negatively affect the solubility of essential nutrients and ions, like magnesium, calcium and potassium, which are particularly vital for proper plant growth. Water pollution also introduces large amounts of aluminum to the soil, which harms plants

3. Facilitating the growth of rival plants

Water pollution gives rise and ample room for other plants to grow. These new plants may not be native to a region and could be detrimental to the existing plants. These weeds will grow well because the nutrients they require for survival are collected in the polluted water

Water pollution changes the growing conditions of plants, including eroding necessary nutrients and bringing in new and hazardous ones. This means the normal growth of plants will be affected and the plants themselves will be harmed. If the condition is persistent, the plants will eventually die. Water pollution can also alter a plant’s surrounding pH levels, such as acid rain, which also harms and kills plants

5. Additional problems to humans and animals

Life is a cycle and we all depend on one another. Water pollution affects plants that humans and animals feed on, poisoning more than just the environment. If we feed on vegetables grown using polluted water, or if we eat meats of animals that ate such crops, we all end up with serious health problems.

How Does Soil Pollution Affect Plants?

Toxins will enter the soil and poison it, causing a chain reaction. The result will be an alteration in the soil’s biodiversity, reduction in the soil’s organic matter, as well as its capacity to act as a filter. With regards to plants, the soil becomes weak and is not able to sustain plants as compared to previous years. This explains why most farms which rely on fertilizers, have been giving out lower yields year after year. Soil pollution increases the salinity of the soil making it unfit for vegetation, thus making it useless and barren.

As mentioned underwater pollution, toxins poison the soil and in turn, poison the plants themselves. Land pollution through oil spills, pesticides, landfills, illegal dumping and many other sources results in chemicals seeping into the soil and eventually into the plants.

These chemicals and metals damage plant cells and hinder them from obtaining the necessary nutrients for growing. This explains why soil pollution also leads to lower yields and poor quality harvests.

3. The effects reach our food chain

Soil pollution, affects plants, meaning they will absorb the pollutants. If we feed on such plants or crops, like vegetables, we inadvertently end up poisoning ourselves. It also means we do the same by consuming animal products like meat and milk if the animals themselves fed on these compromised plants.

When the soil is contaminated, water that is stored in the soil and below it is also affected, causing a lot more issues. This water is used by millions directly and indirectly. The indirect part is that other people will grow crops using the same contaminated water, spreading the problem to more people who may be many miles away

There is a significant proportion of antibiotics widely used in agriculture and healthcare today. They also result in pharmaceutical waste which pollutes the soils, plants and humans. For instance, when antibiotics seep into the soils and spread through the environment, antimicrobial-resistant bacteria thieve, making antibiotics ineffective.

Today, there are about 700,000 deaths from antimicrobial-resistant bacteria, which could kill more people than cancer and cost a lot more if not taken care of immediately.

How Does Light Pollution Affect Plants?

1. Hindering them from flowering

Some plants, like cactus species, bloom only in the dark at night. They are pollinated by moths and bats and other nocturnal insects or animals. Increasing light to such areas means they will not be pollinated and this affects their ability to flower and reproduction

About a third of all human food requires a pollinator. These pollinators go for the strongly scented plants and those plants with bright flowering and are mainly pollinated at night. Increasing light conditions will slow down all these processes and this will ultimately disrupt our food sources.

It is surprising to know that plants, like animals, are sensitive to light, color, intensity and duration of exposure. Photosynthesis, therefore, requires blue and red lights of high intensity. Low-intensity red and infrared lights are good for regulating biological rhythms and controlling processes like seed germination, leaf expansion, flower development, stem elongation and more. Light pollution will therefore affect all these and more

How Does Acid Rain Affect Plants?

Acid rain forms because of atmospheric sulfur and nitrogen dioxides, emitted from natural and man-made sources. The interaction of such compounds with the atmosphere results in sulphuric and nitric acids in the air, which fall down as rain. The rain flows into waterways and onto the ground, compounding more problems to plants as mentioned above on how water pollution affects plants

Acid rain can collect in bodies of water, lowering the water’s pH levels. A change in the normal pH of the surroundings eventually harms and even kills plants, especially those that cannot survive in these more acidic conditions

3. Disrupt the normal life of plants

Acid rain causes direct damage to plants in more ways than one. The rain could damage leaves and make it harder for plants or trees to photosynthesize. This means plants and crops will be unable to feed themselves, mature well and feed the people. It also disrupts the normal exchange and regulation of gases in the air

4. Additional problems to humans and animals

Life is a cycle and we all depend on one another. For instance, we depend on animals for meat and milk, and on plants for food like vegetables, and the animals also depend on crops for their feed. Acid rain poisons the plants that humans and animals eat, poisoning the entire food chain. Such feeds will bring about health complications, especially to humans, not only destroying our lives but also stalling economies.