24 Devastating Effects of Global Warming That Will Leave You Spellbound

In the past, scientists have been skeptical of blaming increasing temperatures on global warming. As we head into future ventures of technology and ingenuity, the science community has steadily stepped on board with the Environmental Protection Agency and other believers in global warming to do something about it. Like never before, scientists are seeing growth rates of increased climate change.

Melting polar ice-caps, the collapse of vegetation and wildlife, and violent surges of hurricanes more rampant in the past are all concerning reasons to understand how climate change can affect so many facets on planet earth. Global warming doesn’t just mean the earth’s getting warmer. Global warming’s massive impact on social, economic, and physical health are areas for great distress.

Global Warming is already affecting the human kind, plant and animals in a number of ways through increased ocean levels, droughts and changed weather patterns. It is well recognized by scientists around the world as serious public health and environmental concern. Here are 24 effects of global warming on the environment.

Below is the list of significant effects that global warming is having on the environment, climate and humankind.

The melting of glaciers will create a plethora of problems for humankind and the animals living on the earth. Due to increased global warming, the level of the sea will rise which will lead to flooding and this will, in turn, create havoc in human life. Apart from raising the sea levels, it will also endanger several species of animals and thus will hamper the balance of the ecosystem.

Areas in the Arctic are diminishing away and flowing into major oceans. Rising temperatures create a much-accelerated threat to wildlife and whole ecosystems in these regions. With glaciers melting at vast rates, a chain of events is being set into motion that cannot be reversed.

Irregular weather patterns have already started showing results. Increased precipitation in the form of rain has already been noticed in polar and sub-polar regions. More global warming will lead to more evaporation which will cause more rains. Animals and plants cannot easily adapt to increased rainfall. Plants may die and animals may migrate to other areas, which can cause the entire ecosystem out of balance.

While it may be flooding in Savannah, severe drought is happening elsewhere in the world. As temperatures warm, the presence of drought has increased in the western U.S. Add on top of that heat waves and no precipitation, whole forests have begun to disappear including tens of millions of trees in Colorado’s Rockies.

Large scale evaporation will be the major cause of droughts in many places particularly Africa. Although it is reeling under the huge pressure of water crisis, increased global warming would further make the situation worse and will cause malnutrition.

As the temperature becomes warmer, it can affect the health of humans and the diseases they are exposed to. With the increase in the rainfall, water-borne diseases are likely to spread like malaria. The earth will become warmer and as result heat waves are likely to increase that can cause a major blow to the people.

As the temperature of the oceans rises, hurricanes and other storms are likely to become stronger. With the increase in global warming, the water in the ocean warms up and it heats up the surrounding air, creating hurricanes.

6. The rise of Sea Levels

The melting of polar ice-caps and less water evaporating into the atmosphere are causing increased sea levels. Quaint coastal towns and cities near the U.S. east coast and Gulf of Mexico are just a few areas where devastating flood damage is starting to make its mark in history.

Global warming can affect agriculture. Although the results are not visible yet, it may show the effects in years to come. As the global temperature will increase, plants will find it harder to survive and will die. Plants are the major source of food for human beings and as a result food shortage may occur. The shortage of food may lead to war and conflicts in some countries.

If you thought last summer’s headlines of record changing temperature was mind-blowing, just wait. Because of greenhouse gases and other causes, unexpected streaks of severe weather are just the tips of the iceberg in global warming. Heat waves cause dangerously hot weather and in recent years, more deaths have occurred due to heat waves than in the last sixty years.

While wildfires are a natural occurrence, with the added carbon dioxide in the air, and hotter summers, the evidence speaks for itself. More frequent wildfires continue to surface in vast amounts each year.

READ  Al Gore and His Strong Views on Global Warming

The rate at which they burn is longer than the last, and with the release of carbon dioxide into the air, not only are people’s lives in danger, but wildlife severely suffers. Each time a wildfire burns, the less oxygen there is to combat the dangerous amounts of carbon dioxide being released into the atmosphere.

Not only is there insurmountable scientific evidence that global warming is increasing, but certain types of events, including extreme precipitation, is also on the rise. Global warming also creates conditions that can lead to more powerful hurricanes and summer storms. Cities and towns on the coast, where sea levels are already rising, face even more challenges as precipitation poses severe flooding.

Are you a lover of fall? Maybe spring is your favorite season. Whatever weather and climate you enjoy, it could be happening sooner and shorter, or later and longer. Global warming affects show spring is occurring 10 days sooner than it has in the past. While it may be nice to go from snow pants to shorts sooner, this could cause flooding from reservoirs filling too soon, and droughts were there’s not enough precipitation to provide adequate nourishment for crops.

If seasons are changing, weather patterns are going berserk, and flooding is occurring due to rising sea levels, our crops are barely getting a fighting chance. Once the food processing industry goes haywire, the economy will really start getting interesting. The price of staple crops could skyrocket causing major inflation and more economic woes.

13. The Rise in Ocean’s Temperature

It’s reported that coral reefs are continuing to see the diminished presence in the ocean due to global warming. Temperature changes affect more than what’s happening on our lands. Once coral reefs are affected, entire ecosystems that thrive become obsolete.

Change the time and seasons and birds are flying south for winter sooner, hibernation takes longer, and a whole series of events is set in motion for a complete collapse of animal life. The entire food chain could be disrupted and enormous consequences could follow.

As more carbon dioxide is trapped in the atmosphere, breathable air becomes harder to come by. If global warming continues, the U.S. is looking at 60 billion dollars to combat respiratory diseases and symptoms.

Nature’s best is beautifully displayed in every nook of planet earth-the majestic lion, to the humble deer. Imagine whole populations where animals can no longer thrive. With such a vast eruption in the animal kingdom, our own world becomes in danger.

If doing simple things like taking a walk outside or working in your garden, become unenjoyable due to severe heat waves, think of the quality of life on a much larger scale. With rising global temperature, even the smallest things we took for granted will be sorely missed.

Who knows how bad the economy could get with decreased vitality of crops, productions, and manufacturing items. Without having nature on our side, the food industry will fall apart. Without the resources to feed the world, manufacturing will collapse. Hunger will be our biggest battle.

As more chain of events is set in motion, air quality will continue to get worse. As bad as it is now in some areas in the world, multiply that by a million.

If global warming goes unchecked, it’s estimated the world’s human population would decrease by 75 percent. With the increasing severity of storms, floods, earthquakes, and wildfires, natural disasters would diminish half of the earth’s population. Another 25 percent would succumb to air-related illnesses, starvation, and poverty.

What little would remain of the earth as we know it, would be a sliver. The rest of the human population would have to find and implement alternative energy on a consistent and regulated basis. It’s hard to imagine, but each of these events affects another event. Pretty soon, the domino effect will reach home. There’s plenty that can be done to guarantee these effects won’t become earth’s ultimate fate

If you can’t stand to go without power during a thunderstorm, imagine our whole electrical infrastructure going off the grid. With the current threat of increasing storms and violent aftermaths of hurricanes and tropical storms, it would only take a few hits to crumble our electrical system.

Our fresh water supply will greatly diminish with global warming. With the demise of coral reefs and the ecosystems therein, less fresh water will flow into lakes and tributaries.

Countries like Greenland are deteriorating at a highly elevated rate. Beautiful cities, even continents could one day be part of a vast sea.

As an Amazon Associate, I may earn a small commission from qualifying purchases if you click to Amazon from my site and chose to make a purchase. You can read my complete affiliate discolusre for more details. 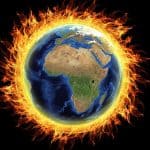 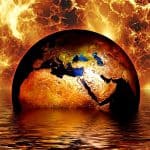