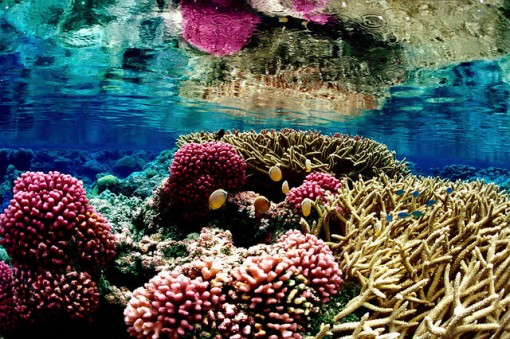 Coral reefs are some of the most beautiful places on Earth to visit. Even just watching an underwater documentary film about them will show you how lively and beautiful they are. Coral reefs are more than beautiful, they are fascinating ecosystems, and important to all of life on Earth. It almost isn’t fair to call a coral reef a “biome” or “ecosystem,” it may be more important to their survival to begin to see them for what they are – living communities.

Here are the top 25 coral reef facts you should know.

Fact 1: Any reef that is called a “barrier” reef gets its name because its presence protects the shallow waters along the shore from the open sea. That protection promotes the survival of many types of sea plant and animal life.

Fact 2: A coral reef isn’t a “thing,” it’s actually a community of life that lives and thrives in one location. What we think of as the base of the reef (and what we see when it is dry and removed from the water) is only one small aspect of a living reef.

Fact 3: The hard shell you see when coral is removed from water is the hard shell of an animal called a polyp. It is the cluster of polyps growing together that gives reefs their shape.

Fact 4: Reefs that are noticeable in size, like the Great Barrier Reef in Australia, are between 5 and 10,000 years old.

Fact 5: The Great Barrier Reef is actually made up of 900 smaller reefs.

Fact 6: The Great Barrier Reef covers 2,600 miles. It also crosses over 500 islands and is one of the most visited reefs in the world.

Fact 7: Reefs are very important to the fishing industry because they are the natural habitat of the bait fish which is used to fish for tuna and other large species.

Fact 8: Reefs are where many fish and sea creatures choose to spawn. The protected environment of the reef means their eggs will be safe from predators.

Fact 9: The algae that typically covers and grows around a reef isn’t a plant, it’s a living creature. There are many different kinds of algae, from the microscopic to ones with leaf like appendages several feet in length.

Fact 10: Benthic Diatoms are microscopically small and vastly abundant algae type lifeforms that live in the reef ecosystem. They are a huge reason why a living coral reef has such a dense biomass.

Fact 11: Scientists have discovered that many parts of a coral reef can be harvested to make medications to treat cancers and other illnesses.

Fact 12: The numerous types of seaweed, plankton and algae type growths that thrive on a coral reef provide food for an amazing amount of fish – fish that are also safe to feed in the protected structure of the reef.

Fact 13: Coral reefs can also be started on the shells of sunken boats. In fact, to help preserve different sea biomes, the navy will sink old ships to allow a coral reef to grow.

Fact 14: Wherever coral reefs grow, the sea bed is more stable. Reefs help seagrass and other sea plants survive in the area. The more plants are growing on the sea bed, the less impact storms and surges will have on seabed too. All of the plants that are protected by the coral reef prevent the bottom of the bed from being washed out deeper, changing the depth and temperature of the water near the shore. The sea bed washing out can also cause significant erosion of the shoreline.

Fact 15: Coral reefs also help to improve the surrounding water quality. They act as a kind of filter that traps things floating in the water, which makes for cleaner water all around.

Fact 16: Did you know that because the coral reef can stabilize the seabed for seagrasses, it provides a space for feeding and raising babies for many of the sea mammals? A seagrass meadow acts like a nursery for manatee and dugongs, where they can feed and raise their calves in a protected environment.

Fact 17: Villages tend to appear wherever there is a coral reef because it can provide a major food source for people without them having to venture out into unprotected waters, or too far inland.

Fact 18: There are three types of reefs, and one gets mistaken for an island. There are barrier reefs, fringing reefs and atolls. The last is often called an island when it is really a reef.

Fact 19: A coral reef needs sunlight to grow, that is why they hardly ever grow in waters deeper than 45 feet. They also are more likely to be found in tropical oceans, as the water is clearer and warmer.

Fact 20: Fringing reefs get their name from being closer to shore than a barrier reef. They are arranged like a fringe around the shallow waters. Barrier reefs are further out to sea, and in deeper waters. Atolls are mistaken for islands because they are island like and grow on the outer edges of lagoons.

Fact 21: Oddly enough, reefs usually grow up on the east shore of land masses. The temperature there is thought to be warmer than the western side. The ideal temperature for a coral reef is between 68 and 82 degrees Fahrenheit.

Fact 22: Reefs also grow where there are stronger wave patterns and currents. The stronger currents and waves deliver more food for the ecosystem that creates the reef structure.

Fact 23: Coral reefs also play an important role in helping to manage carbon monoxide levels. This makes them of great benefit to the world’s population.

Fact 24: There are more types of fish living in a two acre area of coral reef than there are kinds of birds in all of North America.

Fact 25: The shape of a coral reef forms a natural protective barrier against storm waves. The waves break apart on the reef, so they don’t hit the shore at full force. Any reef that is called a “barrier” reef gets its name because its presence protects the shallow waters along the shore from the open sea. That protection promotes the survival of many types of sea plant and animal life.

The coral reef isn’t just something pretty to look it; it plays an important role in the survival of our planet. It directly supports a marine ecosystem, but it also provides important benefits for mankind.