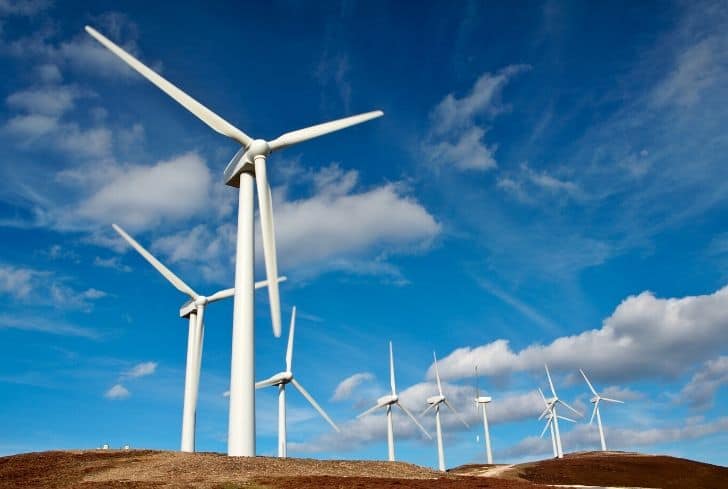 The growing consumption and steady increase in the price of non-renewable sources have forced people to look for alternative fuels that are available cheaply and can meet their growing demand for energy. Among the alternatives available, one of them is wind energy.

Wind energy is one of the alternative sources of energy that has been in use since 200 BC. Wind power possesses a huge potential and has been growing fast in recent years. Here in this article, we have listed are 35 facts on wind energy that can help you learn more about this green energy source.

Wind energy is one of the best sources of alternative energy. Wind refers to the movement of air from high-pressure areas to low-pressure areas. The wind is caused by uneven heating of the earth’s surface by the sun. Hot air rises up and cool air flows in to take its place. Winds will always exist as long as solar energy exists and people will be able to harness the energy from till then.

It is a renewable source of energy and does not produce any pollutants or emissions during operation that could harm the environment, other than those required for maintenance. Wind power is one of the cleanest and safest methods of generating renewable electricity. Wind farms can be created to trap wind energy by placing multiple wind turbines in the same location for the purpose of generating large amounts of electric power.
Read more on the Pros and Cons of Wind Energy.

Fact 1: Wind energy is one of the fastest-growing energy sources in the world. Wind turbines take the wind’s kinetic energy and convert it into mechanical energy. The generators then convert that mechanical energy into electrical energy. For example, windmills produce mechanical energy, enable sails to move boats, and generate electricity.

Fact 2: Windmills have been in use since 200 B.C. and were first developed in Persia and China. Ancient mariners sailed to distant lands by making use of winds. Farmers used wind power to pump water and for grinding grains. Today the most popular use of wind energy is converting it to electrical energy to meet the critical energy needs of the planet.

Fact 3: Wind energy is underutilized as of now and holds tremendous potential for the future. Though there has been a 25% increase in wind turbine use in the last decade, wind energy still provides only a small percentage of the energy of the world.

Fact 4: Wind energy is mostly harnessed by wind turbines which are as high as 20 story buildings and have three blades which are 60 meters long. They resemble giant propellers of airplanes mounted on a stick. The blades are spun by the wind which transfers motion to a shaft connected to a generator that produces electricity.

Fact 5: The largest turbines can harness energy to power 600 American homes. These turbines form wind farms and hundreds are arranged in lines in windy spots like a ridge. A small turbine in the back yard can easily power a small business or a home. A wind farm is a collection of wind turbines in the same location. Many wind farms provide rental income to rural communities where they are situated.

Fact 7: Wind turbines have been criticized for some reason. It is claimed that wind turbines cause noise and disturb nearby residents. The slowly moving turbine fans are also accused of harming bats and bird populations of the locality but this accusation is unfounded as more birds are killed by other factors such as power lines, cars, and high rise buildings. Another criticism is that wind energy is variable- if there is no wind due to some reason, the generation of electricity stops.

Fact 8: The wind energy industry is burgeoning by leaps and bounds. A global generation saw quadrupling from 2000 to 2006. In 2012, more than 70,000 megawatts of global capacity was generated. A single megawatt is enough to power 250 homes. The most installed capacity of wind energy is in Germany followed by Spain. The US and China are also catching up. If this growth momentum is sustained, wind energy will be able to meet one-third of global energy demands by 2050.

Fact 9: Wind energy is the fastest-growing mode of electricity production across the planet. In 2012, $25 billion was spent on wind energy investment. Modern turbines harness over 15 times the electricity generated in 1990. Wind power in the U.S. is a $10 billion a year industry. The biggest source of new generation capacity for electricity in 2012 was wind energy accounting for 40% of total capacity.

Fact 10: Wind power is also unique for the fact that it does not use any water. By 2030, wind power will save around 30 trillion bottles of water in the U.S.

Fact 13: Wind energy is a renewable and pollution-free source of energy. It is mostly used to generate electricity and is an abundant source of energy in many parts of the USA.

Fact 14: Wind energy can be a great source of an alternative to fossil fuels and has been a growing trend in many countries, especially in Europe.

Fact 16: The largest wind turbine in the world is located in the US in Hawaii. It stands 20 stories tall and has blades the length of a football field.

Fact 17: According to NREL, 1MW of wind energy can offset approximately 2,600 tons of carbon dioxide (CO2).

Fact 18: The first modern wind turbine was built in the 1940s in Vermont.

Fact 19: Wind turbines can even be installed on floating structures that can send the electricity back to land with the help of undersea cables.

Fact 20: As per the information released by the Center for Biological Diversity, as many as 1,300 eagles, falcons, hawks and other predatory species are killed each year due to wind turbines that were constructed along a critical migration route.

Fact 21: In the year 2009, the U.S. generated 1 percent of total national electricity production at the time. The energy generated was approximately 52 billion KW hours in 2008.

Fact 22: Wind energy produces more than 20% of the total electricity production in countries such as Denmark and Portugal.

Fact 23: The major drawbacks of wind energy are: high installation costs, change in wind speed, and not suitable for all areas.

Fact 24: Large groups of wind turbines called wind farms have been installed in 38+ states of the U.S. and are currently operating utility-grade wind installations.

Fact 25: In the last quarter of 2012, Texas led the nation in new wind installations (with 1,289 megawatts), followed by California, Kansas, Oklahoma, and Iowa.

Fact 27: Albert Betz, was a German physicist and a pioneer of wind turbine technology. He discovered wind energy theory and published in his book Wind-Energie.

Fact 29: Approximately $25 billion of investment was done in 2012 in new wind projects and it brought the 5-year annual average investment to $18 billion.

Fact 30: As much as 20% of electricity consumed by the U.S. could come from wind energy by 2030 but need for clean energy tax credits is a must for achieving this target.

Fact 32: Various myths related to wind farms are: wind farms are ugly and popular, they are noisy and produce energy only 30% of the time.

Fact 33: Approximately 80,700 people were involved in various wind-related jobs at the end of 2012 across fields such as development, siting, construction, transportation, manufacturing, operations, services.

Fact 35: Smaller wind turbines can be used to charge batteries or as backup power in caravans and sailing ships.