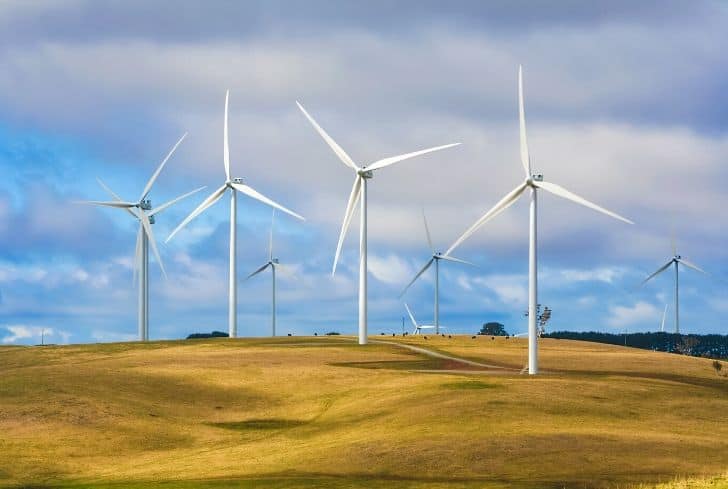 Through years of exploitation, it became clear that horizontal axis wind turbines, or HAWTs, perform well in open areas while VAWTs have much less restrictions and thus can be mounted on hilltops and rooftops in urban areas.

General Overview of VAWT and HAWT

For HAWTs wind direction is important as blades are more productive when the wind flows at the right angle. Additionally, they usually have a rotation drive to adjust the blades to the wind direction.

On the contrary, a vertical axis wind turbine is not so dependent on the wind angle and can operate at a lower wind speed than an average HAWT. However, there are a few horizontal axis wind turbines designs, such as a wind turbine by TBHAWT Manufacturing, that manage to escape the efficiency loss being designed to keep effective even at the wind speed of 8 m/sec or less.

Vertical axis wind turbines stand vertically or perpendicular to the ground converting wind from all 360 degrees around. As a perfect fit for urban areas, VAWTs can be used in places with inconsistent winds or complex rural areas.

Despite these facts, VAWTs appear less productive than HAWTs due to lower operational speed and subsequent productivity but they are definitely a perfect choice for an individual household with high turbulence winds.

HAWTs and VAWTs producing electricity less than 100 kW are considered small and are mostly used locally for household needs. However there are some designs of HAWT with over 50 kW production which proved to be profitable due to a good combination of cost-effectiveness and customer reach.

Small wind turbines tend to be more popular as they have less land and investment requirements that big ones. Small WTs are especially fit for remote and off-grid areas, and can be connected or disconnected to national power lines.

Horizontal axis WTs prevail in the wind energy market as their construction design allows to obtain more energy through full rotation of blades in terms of consistent wind flow. What is more, horizontal axis wind turbines are resistant to backtracking which is also beneficial in this type of power generation.

However, this drawback is eliminated when a horizontal axis wind turbine farm is located in a properly selected area with the consistent, same-directional wind flow.

A small wind turbine often has a wind vane to align with the wind direction while large wind turbines include a yaw meter to correct the wind turbine position to keep aligned with the wind stream. Consistent, stable wind flow is important to have when an operator is looking for a cost-effective solution.

Vertical axis wind turbine’s blades rotate perpendicularly to the ground and around the vertical axis through using drag and lift effects for operation. Despite the lack of popularity compared to HAWT, VAWTs can receive and process wind from any direction so that it perfectly suits urban and suburban areas with turbulent, inconsistent winds.

The wind turbine’s gearbox and some of its equipment can be installed closer to the ground. By doing so, a wind turbine user may significantly cut down maintenance expenses, which, along with less noisy construction, creates for greater co-living conditions.

Vertical axis wind turbines are quite sensitive to backtracking due to blades going rotating along the wind direction while they need to travel back into the wind stream before they get pushed back around.

At the end of the day, new researches show that vertical axis wind turbines are not that much different from horizontal axis ones – the wind turbine efficiency strongly depends on the area wind conditions and required power generation output volume.

At rotation, HAWT blades obtain effects of changeable inertial force and ever-stable gravity. Due to these influences HAWT blades go through an alternating load that is detrimental to the blade fatigue strength.

During rotation, vertical axis wind turbine’s received effects are more stable due to the inertial force and gravity stabilization. In this regard, the load is fixed so VAWT’s fatigue longevity is longer than HAWT’s one.

It has become a common knowledge that horizontal axis wind turbines show great performance due to sufficient starting speed and consistent wind flows. However, it should be mentioned that wind turbine efficacy largely depends on construction design.

To support this idea, China Aerodynamics Research and Development Center carried out an experiment with a small horizontal-axis wind turbine with a starting speed of around 5 m/s and a maximum received speed of 5.9 m/s.

The experiment proved that this starting speed is insufficient to outperform energy consumption of the wind turbine and thus is unsatisfactory. At the same time, other wind turbines, with a greater wind speed range such as the above-mentioned WTW-55 by TBHAWT Manufacturing mentioned above, are a more promising wind turbine in terms of commercial use.

Horizontal axis wind turbines prevail in the wind energy market due to their much higher efficiency compared to VAWT. In their turn, HAWTs divide into big and small wind turbines where big WTs need spacious open areas, ideally with access to the seaside to receive more wind.

Small wind turbines have less limitations and can be used for small domestic households as well as for procuring a community or a town. Surely, it all strongly depends on the wind farm size – the larger it is, the more households it may serve.

When it comes to commercial usage, horizontal axis wind turbines leave VAWT far behind in terms of upscaling and productivity. Being bigger in size, HAWT maintenance costs more, yet at the same time, they produce ten times more electricity than an average vertical axis wind turbine.

It should be reminded that vertical axis wind turbines are noticeably inefficient in the high-speed wind flows due to their ultimately low starting torques and dynamic stability issues.

Both horizontal and vertical axis wind turbine types have benefits and drawbacks. To get most of it, a developer first needs to decide on whether they want a wind turbine to self-procure, or to monetize wind energy turning wind turbines into a stable long-term income.