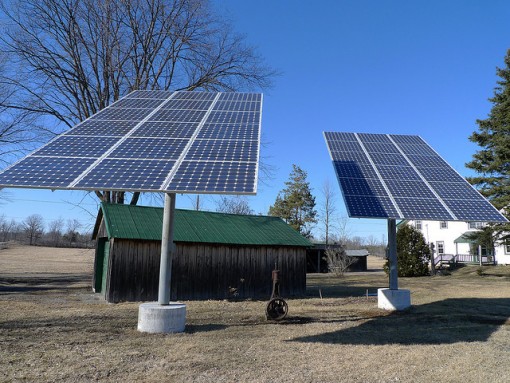 Energy is the basic resource that our society needs to function. From the discovery of fire to the current multiple uses of fossil fuels, energy has driven mankind further and further. Much of our energy needs are met by fossil fuels viz. coal, natural gas and oil. These are created within the earth by the process of fossilization. It takes many millions of years for the transformation to complete. In the 21st century, we have used this energy faster than the earth can replenish it. As a result, the vast stores are beginning to thin down. To find a solution to this issue, the popularity of renewable sources of energy has grown tremendously.

On our planet, the most easily recognizable source of energy is the sun. In fact, life has been successful on Earth for so long because of the amount of sunlight we get. It helps the plants grow, animals thrive and creates a number of natural phenomenon. One way or another, it also affects the many renewable sources of energy. Another source of energy comes from within the Earth itself, also known as Geothermal energy. As of now, we have been able to tap eight such renewable sources.

1. Solar Energy: Solar energy is the first such renewable source. It is energy derived from the sun and has been the most popular form of alternative energy for many centuries. Electricity can be generated with the help of solar energy, using photovoltaic technology or heat powered engines. Most of these technologies are able to capture the sunlight and convert it into electricity that can be stored in batteries until needed. Some of the more common uses of such renewable sources of energy is solar cooking, heating water and battery powered electronics. Solar power has also been adapted to industrial uses.

2. Wind Energy: Wind energy has been harnessed over the last few decades by way of wind turbines. These are similar to windmills in construction and work much like regular turbines do. When the wind speed is high enough to move the turbines, electricity can be produced by the movement. Higher the speed of the wind, more the amount of electricity can be produced. This is why most wind powered turbines are found in high altitude areas or near shores with constant breeze. The potential of such wind farms combined with other renewable sources of energy is quite high in the near future.

3. Hydro Electric (Water) Power: Another way in which the sun is able to provide us with clean energy is through water. Whether it is the currents in the ocean or the tides in the sea, all of it happens due to the sun. As of now, there a number of ways in which hydroelectric energy (water based electricity) can be captured. Dams are a common way to generate electricity on a large scale basis. The fall of water powers turbines, which are able to produce energy when they turn. Small waterfalls occurring naturally are another source, along with systems that derive kinetic energy from the movement of water in rivers, streams and oceans.

4. Geothermal Energy: There is a tremendous amount of energy stored within the Earth that is not fossil fuels. It is known as Geothermal energy. Since the Earth was formed, there has been a constant decay of minerals that were part of the make-up. Many are radioactive in nature and release great amounts of heat when they do. This heat makes it away to crust and finds a way out when cracks appear in the surface of the Earth. These are thermal vents, which release super-heated steam and boiling water. Such vents can be adapted for the generation of electrical power, providing us with more renewable sources of energy.

5. Biomass Energy: A more rudimentary form of clean energy is biomass. This has been used in different ways by humans for thousands of years. Biomass is nothing more plants and their residues, both of which are renewable sources of energy. Plants contain energy that is stored within them during the process of photosynthesis. This energy is broken down and made usable when the plants are burnt. Biomass plants are basically furnaces that can break down large amounts of raw material. Leftover parts of crops, rotten plants, diseases vegetables and even waste wood parts are usable as raw material.

6. Biofuels: Finally, we have Biofuels, which are extracted from plants and crops as well. They differ from Biomass as renewable sources of energy since they are synthetic in nature and are not utilized to directly create electricity. Ethanol is the main form of biofuel, which is created by the fermentation of sugar. It is regularly blended with gasoline as a form of car fuel, since it produces lesser carbon dioxide when it burns.

7. Hydrogen Energy: Hydrogen has tremendous energy and can be used to power homes and industries. Hydrogen is available with water and is the most common element available on earth. Water contains two-thirds of hydrogen but in nature it is found in combination with other elements. Once it is separated, it can be used as a fuel or could be used for generating electricity. Hydrogen energy is completely renewable since it is extracted from water which is available in abundant supply. It is completely environment friendly and do not leave any toxic emissions in the atmosphere. It can be produced on demand but the technology to produce it is still in early stages.

8. Ocean Energy: Almost 70% of the earth is covered with water. Due to the massive size of oceans, this form of energy has much better potential to produce power than any other source of energy. Ocean energy can be harnessed via 3 ways: wave energy, tidal energy and Ocean thermal energy conversion (OTEC). The rise and fall of tides is used by the tidal energy generators, which is then used to move turbines, which in turn generate electricity. The tidal energy converts the kinetic energy to electrical energy.

Wave energy, on the other hand,  is captured directly from the surface of the waves produced in the oceans. Waves are nothing, but regular disturbances produced on the surface of water. The main disadvantage of wave energy is that it involves costly set up and water conditions are not same in every part of the world.