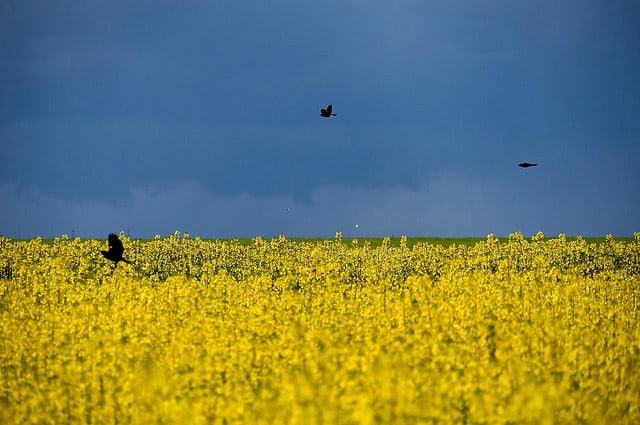 Fuels that have been extracted from plants and crops are known as biofuels. Of these, the most commonly extracted and used one is Bioethanol or simply Ethanol and Biodiesel. It is blended with gasoline and can be used as an alternative fuel for your car. Plant-based fuels come from renewable sources, can be grown anywhere and have lower carbon emissions as compared to fossil fuels.

Biofuels not only help a struggling economy by providing jobs but also helps in reducing greenhouse gases up to much extent by emitting less pollution.

We should increase our development of alternative fuels, taking advantage of renewable resources, like using corn and sugar to produce ethanol or soybeans to produce biodiesel.

As prices of crude oil are soaring day by day, most people are switching to biofuels to save money and reduce their dependence on oil. Biofuels are produced from wheat, corn, soybeans and sugarcane, which can be produced again and again on demand, so they are sustainable.

Though biofuels have many advantages over their counterparts, there are some other complicating aspects that we need to look at.

Biofuel is made from renewable resources and relatively less-flammable compared to fossil diesel. It has significantly better lubricating properties.

It causes less harmful carbon emission compared to standard diesel. Biofuels can be manufactured from a wide range of materials. The overall cost-benefit of using them is much higher.

As of now, biofuels cost the same in the market as gasoline does. However, the overall cost-benefit of using them is much higher. They are cleaner fuels, which means they produce fewer emissions on burning. With the increased demand for biofuels, they have the potential of becoming cheaper in the future as well.

With goals such as reducing drop-in biofuel costs, it aims to “enable high-value products from biomass or waste resources” and reduction in the cost of producing biopower. So, the use of biofuels will be less of a drain on the wallet.

Biofuels are adaptable to current engine designs and perform very well in most conditions. It has higher cetane and better lubricating properties. When biodiesel is used as a combustible fuel, the durability of the engine increases.

There is also no need for engine conversion. This keeps the engine running for longer, requires less maintenance and brings down overall pollution check costs. Engines designed to work on biofuels produce less emission than other diesel engines.

See also  What is El Niño? What Causes it and What Are its Global Effects

Gasoline is refined from crude oil, which happens to be a non-renewable resource. Although current reservoirs of gas will sustain for many years, they will end sometime in the near future.

Biofuels are made from many different sources such as manure, waste from crops, other byproducts, algae and plants grown specifically for the fuel.

Most of the fossil fuels will expire and end up in smoke one day. Since most of the sources like manure, corn, switchgrass, soybeans, waste from crops and plants are renewable and are not likely to run out any time soon, it makes the use of biofuels efficient in nature. Also, these crops can be replanted again and again.

Besides, the burning of coal and oil increases the temperature and causes global warming. To reduce the impact of greenhouse gases, people around the world are using biofuels.

Not every country has large reserves of crude oil. For them, having to import the oil puts a huge dent in the economy. If more people start shifting towards biofuels, a country can reduce its dependence on fossil fuels.

Biofuel production increases the demand for suitable biofuel crops, providing a boost to the agriculture industry. Fueling homes, businesses and vehicles with biofuels are less expensive than fossil fuels. More jobs will be created with a growing biofuel industry, which will keep our economy secure.

Since biofuels can be made from renewable resources, they cause less pollution to the planet. However, that is not the only reason why the use of biofuels is being encouraged.

They release lower levels of carbon dioxide and other emissions when burnt compared to standard diesel. Its use also results in a significant reduction of PM emissions.

Although the production of biofuels creates carbon dioxide as a byproduct, it is frequently used to grow the plants that will be converted into fuel. This allows it to become something close to a self-sustaining system.

Besides, biofuels are biodegradable that reduces the possibility of soil contamination and contamination of underground water during transportation, storage or use.

Even with all the benefits associated with biofuels, they are quite expensive to produce in the current market. As of now, the interest and capital investment being put into biofuel production is fairly low, but it can match demand.

See also  15 Steps to Transform Your Business into a Green, Eco-Efficient Machine

If the demand increases, then increasing the supply will be a long term operation, which will be quite expensive. Such a disadvantage is still preventing the use of biofuels from becoming more popular.

Monoculture refers to the practice of producing the same crops year after year, rather than producing various crops through a farmer’s fields over time. While this might be economically attractive for farmers but growing the same crop every year may deprive the soil of nutrients that are put back into the soil through crop rotation.

The problems with growing a single crop over large tracts of land are many. First, growing only one crop changes the environment in terms of the food available to pests, and they are free to destroy an entire crop.

Secondly, we could treat the pests mentioned above with pesticides, but a few of those pests will inevitably be resistant to the chemicals we use to kill them, and that can inhabit a single field of crops.

The next problem comes with genetic engineering when we decide to modify the crop that is resistant to the pest without the need for pesticides. It is still likely that at least a few pests aren’t affected by the modification, and the problem remains.

Thus, the key to healthy crops worldwide is biodiversity that is simply having lots of different types of plants and animals around.

Biofuels are produced from crops, and these crops need fertilizers to grow better. The downside of using fertilizers is that they can have harmful effects on the surrounding environment and may cause water pollution. Fertilizers contain nitrogen and phosphorus. They can be washed away from soil to nearby lakes, rivers or ponds.

Biofuels are extracted from plants and crops that have high levels of sugar in them. However, most of these crops are also used as food crops. Even though waste material from plants can be used as raw material, the requirement for such food crops will still exist. It will take up agricultural space from other crops, which can create a number of problems.

Using existing land for biofuels may not cause an acute shortage of food; however, it will definitely put pressure on the current growth of crops. One major worry being faced by people is that the growing use of biofuels may just mean a rise in food prices as well.

Some people prefer using algae, which grows in very inhospitable regions and has a limited impact on land use. However, the problem with algae is water use.

The carbon footprint of biofuels is less than the traditional forms of fuel when burnt. However, the process with which they are produced makes up for that. Production is largely dependent on lots of water and oil.

Large scale industries meant for churning out biofuel are known to emit large amounts of emissions and cause small scale water pollution as well.

Unless more efficient means of production are put into place, the overall carbon emission does not get a very big dent in it. It also causes an increase in NOx.

Current technology being employed for the production of biofuels is not as efficient as it should be. Scientists are engaged in developing better means by which we can extract this fuel. However, the cost of research and future installation means that the price of biofuels will see a significant spike.

As of now, the prices are comparable with gasoline and are still feasible. Constantly rising prices may make the use of biofuels as harsh on the economy as the rising gas prices are doing right now.

8. Changes in Land Use

If the land is used to grow a biofuel feedstock, it has to be cleared of native vegetation, which then leads to ecological damage done in three ways.

First, the damage is caused by destroying local habitat, animal dwellings, micro-ecosystems, and reduces the overall health of natural resources of the region.

The native forest is almost always better at removing CO2 from the atmosphere than a biofuel feedstock partly because the CO2 remains trapped and is never released by burning as with fuel stock.

Secondly, the damage is done in the carbon debt created. When it is needed to deforest an area and prepare it for farming as well as to plant the crop, this leads to the production of greenhouse gases and puts the region at a net positive GHG production even before a single biofuel is produced.

Estimates have shown that deforesting native land can actually produce a carbon debt that can take up to 500 years to repay.

Finally, changing land to an agricultural status almost always means fertilizers are going to be used to get the most yields per area. The problem is runoff and other agricultural pollution.

Thus, creating more farmland is likely to damage waterways and energy used in treatment plants, and other mitigation strategies lead to an even larger carbon debt.

The biofuels, which are mostly hydrogen and carbon, burning them produce carbon dioxide, which contributes to global warming. It is true that biofuels produce less GHG emissions than fossil fuels, but that can only serve to slow global warming and not stopping or reversing it.

Therefore, biofuels may be able to help ease our energy needs, but they won’t solve all of our problems. It can only serve as substitutes for the short term as we invest in other technologies.

Biofuel is less suitable for use in low temperatures. It is more likely to attract moisture than fossil diesel, which creates problems in cold weather. It also increases microbial growth in the engine that clogs the engine filters.