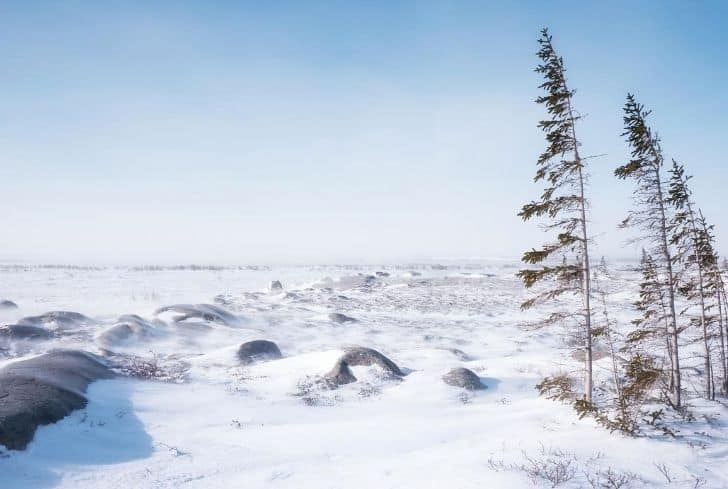 The tundra is the coldest of all the biomes with an annual average temperature of less than 5°C, and precipitation (mostly in the form of snow) less than 100 mm per year. The weather conditions at tundra are so harsh that only a handful of plants and animals can even survive there. The word tundra comes from the Finnish word ‘tunturia’ which means treeless plain.

The tundra is one of the least understood and most fascinating biomes on the planet. This incredibly difficult climate and the environment have both a bizarre and diverse range of animals that have learned to survive with the limited amounts of green plant life, sunlight and moisture.  Due to extremely cold temperatures, the layer just below the surface remains permanently frozen. This frozen layer of ground is called ‘permafrost.’

While the tundra biome is typically thought of as the “frozen tundra,” it is, in fact, made up of variations in temperature, climate, and amounts of precipitation, depending on where it is located. Tundra is mostly known for its frost-molded landscapes, extremely low temperatures, little precipitation, poor nutrients, and short growing seasons. Tundra is broadly separated into two types: arctic tundra and alpine tundra.

Many climate scientists say their biggest fear is that warming could melt the Arctic permafrost – which stretches for thousands of miles across Alaska, Canada, and Siberia.

Climate of the Tundra

Extreme cold temperatures define the typical climate of the tundra.

The arctic tundra, which is located in the northern hemisphere surrounding the North Pole, is characterized by extremely cold and dry conditions, similar to a frozen desert. Furthermore, during the winter months, periods without daylight can extend for weeks, with extremely cold temperatures being reached.

In summer months, the sun can shine almost around the clock, which is why so many plants and animals need this time for survival.

Alpine tundra, on the other hand, can be found on the tops of the world’s highest mountains. Similar to the arctic tundra, these areas are defined by freezing temperatures and dry air, though they are located in higher elevations. Because of these heights, the alpine tundra is often subject to larger concentrations of sunlight at a time, because the air and atmosphere are thinner, thereby allowing rays to penetrate stronger.

The tundra climate offers a short growing season that encourages low species diversity. The animals and plants of the tundra biome have adapted to survive this kind of harsh climate.

Location of the Tundra

There are two main types of tundra biomes in the world, one at the Arctic Circle in the northern hemisphere, and the other that is found on the tops of the highest mountains in the world.

Temperature of the Tundra

The tundra is by far the coldest of all the world’s biomes and is one of the world’s areas that is least inhabited by man.

Tundra areas are also categorized as windy, with typical sustained wind gusts of around 30-60 mph. This occurs both on flatter arctic tundra regions as well as on high altitude mountaintops.

Precipitation of the Tundra

The extremely cold temperature of the tundra means that it does not receive a lot of precipitation, as it is literally too cold for precipitation to fall. Rainfall-wise, tundra is more similar to deserts in yearly amounts, which is why it is often referred to as the frozen desert.

However, because there is so much frozen ground and the air is so cold, plants and animals can survive on limited rainfall because the process of evaporation is nowhere near as efficient as in warmer regions. In the winter months, precipitation falls as snow, and in summer, it exists as either rain or fog. The permafrost and bogs store water in the tundra.

Plants of the Tundra

The name tundra itself is derived from tunturia, the Finnish word for “treeless plain,” and tundar, the Russian word for “treeless mountain tract.” Understandably, due to the harsh climate and fairly constant frozen ground cover, plants find it hard to exist in regions of severe cold with periods of little light.

However, research has shown that there are close to 1,700 different varieties of plants that call the tundra home. Nitrogen and phosphorous take the place of plant life as a basic form of sustenance, as they are nutrients released via the process of decomposition of dead organic matter.

The soil makeup in the arctic tundra is decidedly different from that in other regions of the world. The subsoil in the tundra is a permanent layer of frozen rocks and small material, called permafrost, which typically includes about 25 to 100 cm (10 inches to 3 feet) of depth.

In warmer months, melting snow will provide moisture accumulations in the soil above the permafrost, which allows for plants to grow.

In alpine tundra, the soil may be better drained, but the plant life in these areas is similar to those in the arctic tundra.

One of the amazing adaptations of plant life in the tundra biome is that no plants in the area have significant deep root systems, so as to remain in the wet topsoil. Lower plants and shrubs are much more common in the area than large trees since they do not require deep roots and can change easier with the cold and summer seasons.

Plants have low height and clump together to adapt to the savage cold and harsh wind. Fascinatingly, similar to animals, plants grow closer together in order to provide warmth to each other. The tundra’s few trees remain stunted as an adaptation to the protective insulation of snow on the ground. Plants also photosynthesize even in the low light and cold temperatures.

In order to overcome issues with the lack of pollinating insects and birds, most plants in the tundra reproduce asexually rather than by flowering and pollination.

Common plants found in the tundra biome include:

The tundra is one of Earth’s three major carbon dioxide sinks, the biomass which takes in more carbon dioxide than it releases. During the short summer, tundra’s plants take in carbon dioxide, sunlight and water in the process of photosynthesis. Plants normally give off carbon dioxide after they die and decompose.

However, because of the short, cool summer and freezing winter temperatures, plants can’t decompose. Remains of plants thousands of years old have been found in the tundra permafrost. In this way, the tundra traps carbon dioxide and removes it from the atmosphere.

Animals of the Tundra

There are not a lot of animals in the tundra biome, but those that are there have some fascinating adaptations for survival in this harsh region. It is estimated that there are about 48 species of mammals that live in the tundra.

Animals residing in the tundra climate require special adaptations in order to survive. Animals tend toward large, stocky frames with thick insulation. Layers of fat and fur or feathers help protect animals from the bitter cold. Winter plumage and coats tend to be white like snow, whereas summer coloring tends toward brown.

Because of permafrost, few burrowing animals reside in the tundra climate. The shortage of winter food also discourages hibernation. Animals must, therefore, be active in winter or migrate, and most types of birds migrate to warmer weather.

Birds tend to boast long wingspans. There are essentially no cold-blooded vertebrates due to the extreme cold temperatures, but insects exist in the tundra ecosystem. Most insect species in the tundra tend to be aquatic.

The huge herds of caribou are found in North America (known as reindeer in Eurasia), which feed on lichens and plants. The tundra draws migratory animals such as caribou and waterfowl, particularly for breeding seasons. When colder weather arrives, these animals return south to avoid the harshest conditions.

There are also smaller herds of musk-oxen. Wolves, wolverines, arctic foxes, and polar bears are the predators of the tundra. Smaller mammals are snowshoe rabbits and lemmings. The lemming represents the chief herbivore of the tundra. The snowy owl reigns as a partially migratory predator that responds to lemming population fluctuations.

The main types of animals that are found in the tundra are some that eat plants, and some that eat animals, fish, insects, and birds.

The aquatic animals that ply the Arctic waters are:

There are few species of insects in the tundra, but black flies, deer flies, mosquitoes and “no-see-ums” (tiny biting midges) make the tundra a miserable place in the summer. Mosquitoes can replace the water in their bodies with a chemical called glycerol to keep themselves from freezing. It works like antifreeze and allows them to survive under the snow during the winter. Insects found are:

The migratory birds like the harlequin duck, sandpipers and plovers make marshy tundra a great place. Birds found are:

People do live in certain parts of the tundra, but that is mainly for industry-specific work, such as working for oil rigs. While these settlements are typically small and far less populous than other man inhabited areas, the presence of humans can and does affect the delicate balance of the tundra ecosystem.

Native individuals who reside in tundra areas typically follow the patterns of a main source of survival; for instance, there are some tribes that exist on the entire bodies of reindeer in tundra areas.

Due to overall warming temperatures in the world, as the tundra melts, the plant mass decomposes and returns carbon dioxide to the atmosphere, which is one of the greatest current threats to the arctic tundra.

More people moving to the tundra to work in the mines and oil rigs have created towns and more roads. The movements to traditional feeding and denning grounds of some animals have been disrupted by these obstacles. Many polar bears have starved.

Thousands of migrating birds come to the tundra because of the abundant insects. As pesticides have been used to control the hordes of insects, pesticides reach many of the animals through the food chain that lives on the tundra.

Pollution from mining and drilling for oil has polluted the air, lakes and rivers. The land around has become so polluted that the plants surrounding some nickel mines in Russia have died. When the sun hits the ruts, it causes the permafrost to melt. This causes erosion, and the ruts get bigger, eventually turning into gullies. Some tracks made during WW II are now lakes.