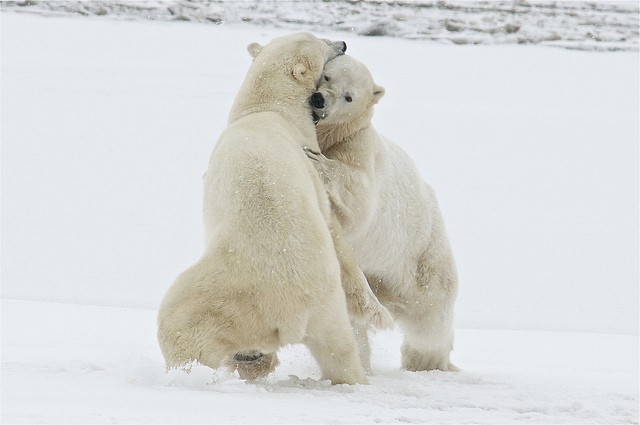 The tundra, while primarily located around the North Pole, is really a defined climate that exists in several other locations on the earth. When people talk about “the tundra” they are referring mostly to the unique ecosystem that exists around the Arctic Circle, but the tundra actually includes areas of Alaska, Canada and Antarctic. The tundra climate spans from most of Greenland to parts of Alaska, northern Canada, and northern Russia. The tundra climate is usually found between the 60-75 degree latitudinal range. There are three classifications of tundra:

Tundras are areas in which a state known as “permafrost” exists. This means that the soil never fully thaws to allow for deep root growth. There is a distinct border between tundra and non-tundra that is evidenced by a tree-line, this marks where the permafrost ends as trees can now take root. The tundra, although treeless and barren appearing, has a vibrant ecosystem that includes plants, animals, insects and more.

“In physical geography, tundra is a type of biome where the tree growth is hindered by low temperatures and short growing seasons. The term tundra comes through Russian from the Kildin Sami word tūndâr “uplands”, “treeless mountain tract”. There are three types of tundra: Arctic tundra, alpine tundra, and Antarctic tundra. In tundra, the vegetation is composed of dwarf shrubs, sedges and grasses, mosses, and lichens. Scattered trees grow in some tundra regions. The ecotone (or ecological boundary region) between the tundra and the forest is known as the tree line or timberline.“

Discovering the World of the ‘tunturia’

Tunturiais a Finnish word that means “treeless land” and it is where the term tundra comes from. While harsh and inhospitable, the tundra has a vibrant ecosystem that includes plants, animals, insects and more. What it has very few of are human inhabitants. There are some indigenous people who live on the tundra, but for most people, it is impossible to visit because the supplies needed to stay safe and warm in that environment are of the type only available to those with large research funds.

The tundra is the coldest biome in the world. Winters are cold, dark and long. There are several weeks where sun never rises. The average winter temperature is well below -34 degrees Celsius and can fall to -70°C in extreme conditions. The average temperature during summer season is between 3 and 12 degrees Celsius, but it only warms up for two months of every year. The sun shines almost 24 hours a day during this season. One of the most telling aspects of the tundra climate is it is defined by its harsh and almost constant wind.

It also has a brief summer period that is noted less for its slightly warmer temperatures then for the fact that daylight can last almost 24 hours at a time. The tundra climate is called many things, one of them is “the land of endless night” for its long winter darkness. During summers, the snow cover of winter melts. However, deeper parts of the soil still remain frozen known as permafrost or permanent frozen soil. The permafrost can be between 10 and 35 inches.

Does the Tundra Have Seasons?

The tundra climate has two main seasons – winter and summer. The transition seasons between them are so short that they are not defined as clearly as Fall and Spring in other regions. The summers last 2 months on average. During the summer, the snow and ice may melt enough to form shallow lakes on the surface but the water cannot penetrate the still frozen soil.

There is also less wind during the summer months, which also allows for plant growth. In the Arctic and Antarctic tundras, the summer months are also marked by almost constant daylight from the sun, in the winter these tundras may only have a few hours of light a day. In the Alpine tundras there is not as extreme a daylight difference, but the days are very short during the winter.

How Much Precipitation Does it Receive?

Tundra climates receive low levels of precipitation. Less than 15 inches of rainfall in the tundra per year, making them drier than any desert biome on earth. This lack of rain also creates an unusual fire hazard. On the average of every 100 years, a major fire incident tends to occur on tundra.

The melting snow and ice allows for just enough plant growth – and then decay – to create a fine layer of combustible material on the surface of the land. When a major fire incident occurs there is little that can be done to stop it as there are no water sources on the tundra. The fact that the tundra is also a natural carbon dioxide sink also promotes burning.

There are 48 different types of animals that call the tundra home, although many of them will migrate from the tundra to warmer climates during the winter. The best known of the animals are the polar bear, snowshoe rabbit, arctic fox, gray wolves, caribou, snow geese, musk-oxen and the lemming. All of these animals have diets that are high in fat to provide them with extra layers of insulation to preserve body temperature. Their fur has been highly prized as its unique hollow core makes it unusually insulating and can protect from harsh winds as well.

Plant life is abundant. There are over 1700 different species of plants that bloom in the tundra climate. Most of the plants grow low to the ground and in clumps that serve to protect their fragile root system from being uprooted during high winds. The permafrost (frozen soil) prevents any trees from growing here.

Why is the Tundra Important?

There are two main reasons why conservation of the tundra is important to life on earth. First, it allows scientists a unique way to study the process of evolutionary adaptation to climate as there is such a limited species that makes the tundra home. Each species not only has adapted itself to the harsh climate of the tundra, but it is related to species in warmer climates. The ability to see the difference so clearly provides science with valuable information about how cells can adapt to different stresses and nutritional availability that leads to a better understanding of how life on earth works, and can be improved.

The second is that the tundra is also one of the largest unexplored areas of the earth. The potential for undiscovered natural resources under its soil is great. The tundra covers almost 20-percent of the surface of the earth, which means that any natural resources there could be enough to help divert an energy crisis but is too harsh for most people to visit. According to geological predictions, the tundra may be where vast supplies of natural resources may be located that have not been tapped into. While this is an important reason to conserve the tundra, it is also why conserving it is so difficult.

Oil companies and other companies that utilize vast amounts of natural resources are pushing to be allowed full access to explore and mine the tundra. Unfortunately, this biome is so unique and fragile that even exploratory drilling can destroy large areas of life that cannot be replaced. As the tundra is also a carbon dioxide sink, scientists don’t know what role it plays in managing weather and climate, as well as resources, for the rest of the world. The destruction of this unique biome to gain access to natural resources may wind up causing more harm to the overall world in the long run than additional resource access in the short term can counterbalance.