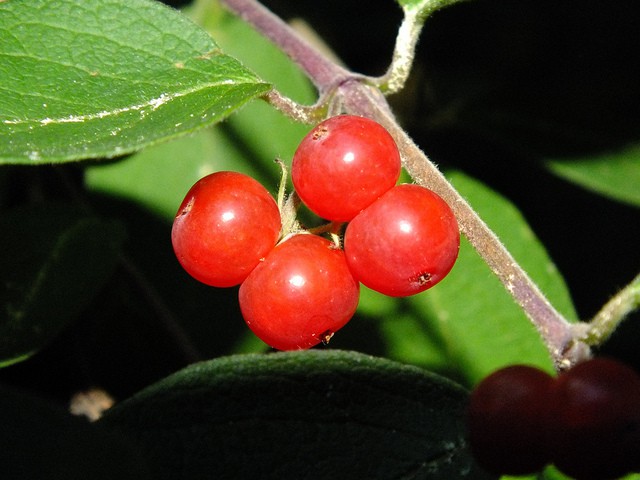 The tundra only has what would normally be considered a growing season for two months of every year. Despite the almost year-round freezing temperatures, the tundra biome is thriving with a surprising variety of plant life.

What you won’t find on the tundra are trees. After all, that is how it got its name – tundra comes from the Finnish “tunturia” which means treeless land. The winds are harsh here, and most of the plants that grow on the surface of the tundra grow in clusters to form a natural barrier against the wind.

There are over 400 different types of plants that bloom on the tundra, but few plants are associated with year-round growth. One of the issues with plants growing on the tundra is the nature of its soil. While there is a thick layer of soil beneath the ice, it rarely thaws beyond a few inches. This means that only plants with the shallowest roots can take hold.

The fact that plant life is present, but not always lasting plays an essential role in sustaining the other life forms that live in this biome. As the plants die and decay, many of the other organisms will use them to nourish themselves during the long winter months.

Here is a list and brief description of the common plants you will find on the tundra that are perennials.

Bearberry isn’t really all about bears, although they have been seen to eat them. The red berries and green leaves attract the owls and birds that come to the tundra. The plant has uniquely adapted to the tundra by growing very low to the ground. It is not quite a ground cover, as it does have some height. It can have berries on it year-round.

The Labrador Tea is a strange little plant with red leaves and what can only be described as hairy legs. The stems of the plant are covered with a fine type of hair-like growth that helps it to conserve heat. It is a low, slow-growing shrub with evergreen leaves that are used to make tea for treating colds.

This attractive, sweet-scented shrub needs only moist acid soil to show its full brilliance. Along with other advantages, the plant is used in closets to protect against moths. Unusual about this plant is that it is not consumed by any of the animals on the tundra.

The Diamond leaf is a form of willow, but not like the willows that you may be used to. These are not tall willows, but they grow close to the ground. Like the Labrador, they also have a hair-like growth that covers their stems and roots that help the plant to stay warm.

This plant is also edible and gathered by people and animals because it is rich in calcium and many vitamins. The plant is also very flexible, so it is not found in groupings but grows separately as it can bend to manage the harsh winds.

Arctic Moss is the most plentiful plant on the tundra, and it is not quite unlike the moss that grows elsewhere in other biomes. It can grow on the surface but is primarily an aquatic plant that grows beneath the surface of the water. It does not have root systems but rhizoids.

It is also covered in small leaves that are only one cell in thickness, which makes it easy to sustain itself with the very limited amount of photosynthesis it can glean.

Artic moss is a mainstay of many of the animals and mammals in the tundra as it is rich in nutrients and can grow all year long. When it dies, it also becomes an important source of nutrient for other organisms that thrive there. It is also an important food source for birds that pass through the tundra on their migratory paths.

It is a favorite study subject of scientists because it reveals much about the natural evolution of life to protect itself in harsh climates.

Arctic willow or rock willow is normally found in the North America tundra region, which consists of Northern Canada and Northern Alaska. Arctic willow is 15-20 cm in height, has long trailing branches and grow prostrate, shrub, and carpet.

Caribou Moss grows in the arctic and northern regions around the world. They grow on the ground and rocks and can go up to1-4 inches high. It is a representative of the exceptional tundra wildlife. Though it is lichen, not a plant, perhaps due to its bizarre beauty, it is actually broadly used in home and outdoor decorations, architectural models, and dish gardens.

They go dormant when there is no light or water. They can grow again after being dormant for a very long time. The stems or stocks of caribou moss are hollow. There are so many uses for such miniature plants as they are hardy and delicate at the same time.

Tufted Saxifrage grows on thick stems and has several straight flower stems that can go as high as 3-15 cm. Each stem has around 2-8 flowers, and each flower has five white petals. Tufted Saxifrage also has a small fruit that holds many small seeds.

The Tufted Saxifrage grows on the rocky slopes and can be found from Alaska to the Cascade and Olympic Mountains and northwestern Oregon.

Pasque Flower is a member of the Ranunculaceae family and can grow 6-8 inches off the ground. On each stem, it has one flower with 5-8 petals—the color of flower range from lavender to almost white. Pasque Flower grows on southward facing slopes and is common throughout the northwestern U.S. up to northern Alaska. It is also the state flower of South Dakota.

Variations of these plants are found in different biomes, which also allows scientists to study the spread of plant life via migratory animals as well.

This hardy herbaceous and aquatic sedge is the perfect choice for water gardens or patio water containers, with its even more pleasing views of the white, feathery flowers, bringing fine taste and subtlety into the garden.

These perennials are also known as Tufted hairgrass. This low-maintenance ornamental grass is very useful for erosive terrains and heavily damaged environments. It is suitable for borders and containers, providing fine texture and aerial flowers, mesmerizingly stirring on windy days

Another rock-breaker, as its Latin name suggests (Saxifraga means rock-breaker), grows in barren, rocky landscapes in all kinds of cold temperatures. It is an evergreen cushion-forming perennial, which forms alluring magenta to pale pink or white cup flowers.

Although the plant isn’t easily available, it can be grown in gardens if planted in very dry spots. It can also be used in rock gardens to “break up” the rocky scenery.

It is a flowering shrub that grows in wet, rocky woods and on cliffs—often used in mixed borders and small urban gardens as a year-round structural element. The bright red fruits and nice reddish fall color may add a pleasant sense of warmth to your urban landscape. It’s edible too.

The flowering shrub tundra rose is often used as an ornamental plant by landscaping firms because of its hardiness and low maintenance. It is an appealing shrub in the wild and has variable hardy cultivars, with flowers from white to yellow, orange, and pink, small but abundant, fascinating through their vividness.

Saskatoon berry is a fascinating shrub due to its multiple ornamental features like delicate white flowers in spring, tasty blueberries in summer, and dazzling yellow and red fall color. It is also useful for controlling erosion through its knitting rhizomes, without being aggressive. It is extremely hardy and highly adaptable to hills, rocks, or streamsides.

Papaverradicatum is a species of poppy known by the common names Arctic poppy, rooted poppy, and yellow poppy. This plant is about 10-15 cm tall, with a single flower per stem. The flower heads follow the sun, and the cup-shaped petals help absorb solar energy.