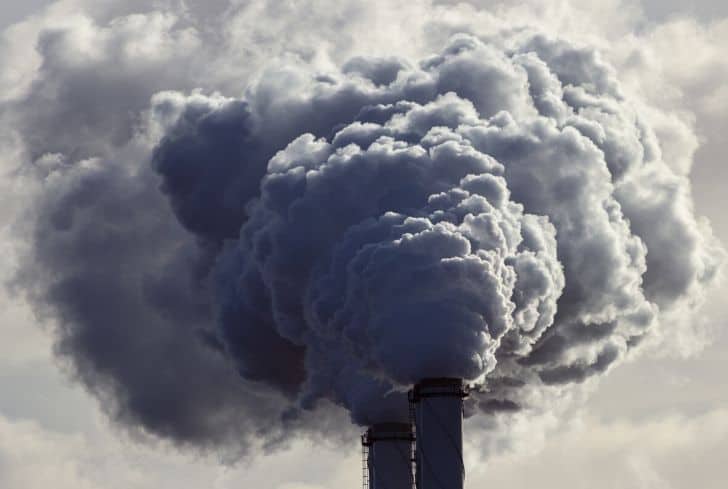 One of the largest reservoirs of carbon is the Earth’s hard rock crust. Over the eons, sedimentary rocks were formed that contain loads of carbon compounds, including the hydrocarbons that we now use as fossil fuels.

Sedimentary rocks may hold an enormous amount of carbon, but they are not considered a carbon sink because they no longer take in more carbon than is released primarily through volcanic eruptions. In fact, due to man’s use of fossil fuel, they are a source of much of the excess CO2 in our atmosphere.

A carbon sink is a natural or artificial reservoir that accumulates and stores some carbon-containing chemical compound for an indefinite period. The process by which carbon sinks remove carbon dioxide (CO2) from the atmosphere is known as carbon sequestration.

That said, the fact that ages and ages ago, the formation of sedimentary rocks took in more carbon than was released is a good illustration of how carbon is always changing forms. Much of the Earth’s carbon is in flux – moving from sources to sinks and then transforming back into sources again. This cycle is called the global carbon cycle, within which carbon sinks play a primary role.

The main sources of carbon include the combustion of fossil fuels (coal, oil, and gas) for the sake of energy and transportation by humans, fires (also includes wildfires) and farmland.

Plants take up CO2 from the atmosphere and use it in the process of photosynthesis. When plants die, some of this carbon is transferred to soil as they decompose. Oceans are major carbon storage systems. Together Earth’s land and Ocean sinks absorb half of the carbon dioxide emissions. Carbon sequestration is a process that is used to remove carbon the atmosphere to mitigate the effects of global warming.

Green plants play a huge role in controlling CO2 levels because of the process they use to live: Photosynthesis. The process of photosynthesis occurs in the cells of microscopic organisms and within the leaves of a plant. It uses solar radiation energy, or sunlight, to change carbon dioxide and water into glucose like carbon sugar.

Once the sugar is processed, it is further converted and used in a variety of other molecules, such as fats and proteins and starch and enzymes. Once this is complete, the process of photosynthesis then releases oxygen that is needed for plants and animals.

It is generally accepted that approximately half of all carbon that is extracted from the atmosphere is done through the process of photosynthesis.

Carbon is the main component of the organic matter that makes fertile agricultural soil. It also helps the soil retain water. Plants are the primary way that CO2 is transferred to soil. Not all of the CO2 that plants suck up for photosynthesis is needed for food. The excess goes down through their roots and feeds organisms that live in the soil. Carbon from the roots and leaves of dying plants is also captured in soil.

The world’s oceans are its workhorse for absorbing and storing carbon. Photosynthesis plays a role along with other biological processes that work together to sequester CO2 and other carbon compounds.

This process moves CO2 from the surface down into the depths of the ocean where it is stored, or sequestered, for eons. How does the carbon get from the atmosphere into the water? The first step is photosynthesis used by microscopic aquatic organisms called phytoplankton.

Phytoplankton floats on the surface of oceans and uses photosynthesis to produce the energy they need to live. So, just like green plants, they suck up CO2 from the atmosphere. Phytoplankton is a key part of the ocean’s food chain, but if they aren’t eaten, they die and start the second stage of the biological pump when they start sinking through the ocean.

The dead organisms cluster together as they sink, increasing their mass and reducing the risk of being consumed. The final stage of the pump is when these clusters of dead phytoplankton reach the ocean floor where they, and the CO2 they contain, remain for thousands of years.

Calcium Carbonate is the primary ingredient that Clams, oysters, coral, and other hard-bodied aquatic creatures depend on to create their hard shells. This carbon compound is produced by carbon dioxide combining with calcium that has previously been dissolved in seawater. When these organisms die, their body parts and shells sink deep into the ocean to the seafloor, thus hiding, or burying, carbon.

Over a long period of time, these dead organisms create carbonate-rich deposit layers on the floor of the ocean. After millions of years have passed, more and more carbonates form, which then creates heat and pressure that causes them to turn into sedimentary rocks. This includes chalk, marble, and limestone.

Now that you know the three basics, here a just a few of the many natural carbon sinks found throughout the globe.

Man-made carbon sinks can be created or use existing underground formations, or even the oceans, to store CO2. The main artificial sinks are landfills and carbon capture and storage processes. Artificial carbon sequestration is a good example of man-made carbon sinks. Maybe you’ve heard of clean coal? Well, the idea behind clean coal is capturing the CO2 that coal-fired power plants produce and basically burying it, or sequestering it, forever.

See also  Is It Necessary to Clean Solar Panels and How to Do It?

Much research is going on in this area, including:

Why are Carbon Sinks Important?

We need to urgently and significantly reduce our emissions of greenhouse gases to avoid future catastrophic climate change. It requires us to keep ecosystems and habitats that act as critical natural carbon sinks intact to ensure that they retain as much of the carbon trapped in the system as possible and don’t tend to become sources of carbon release to the atmosphere.

Managing and protecting our natural carbon sinks is key to determining whether they can act as a source of CO2 to the atmosphere or a sink under future climates.

We have modified the structure and function of many ecosystems by land-use change and land degradation as a result of the burning of forests, conversion of land to croplands, urban areas, mines and roads. Therefore the relationships between the natural carbon sources and sinks of carbon dioxide have been altered.

Many times the release of trapped carbon as carbon dioxide is accompanied by the release of other powerful greenhouse gases such as methane, which exacerbates an already concerning global climate status.

How Do Trees Act as Carbon Sinks?

During photosynthesis, trees and plants “sequester,” or absorb, carbon from the atmosphere in the form of CO2, and turn water and carbon dioxide into oxygen and sugar called glucose. Trees take in carbon dioxide from the air and store it as carbon in forest biomass, that is, trunks, branches, roots and leaves, in dead organic matter like litter and dead wood and in soils. This process of carbon absorption and deposition is known as carbon sequestration.

Whether a forest is a carbon source or sink depends on the net balance of all of these carbon exchanges. In cases where the net balance of carbon emissions by forests is negative, i.e., carbon sequestration prevails; forests contribute to mitigating carbon emissions by playing a role as both a carbon reservoir and a tool to sequester additional carbon.

In cases when the net balance of carbon emissions is positive, the forest becomes a carbon source that releases more carbon than it absorbs, such as during a forest fire or when there are more dead than living trees. It contributes to enhancing the greenhouse effect and climate change. Carbon dioxide is created when carbon-containing substances are burned or when they decompose in other ways. Still, the carbon source/sink balance is as dynamic as it is complex.

See also  Should You Move Out of a Building With Dangerous Materials or Try To Get Rid Of Them?

Forest carbon is released by natural processes such as tree dies, respiration and oxidation, as well as deliberate or unintended results of human activities i.e., harvesting, fires, insect attack, deforestation or other disturbances.

In the past century, forests managed by Canada have been a significant carbon sink that was steadily adding carbon to that already stored. However, in the past few decades, the situation has reversed in some years, and they have become carbon sources, releasing more carbon into the atmosphere compared to what they are accumulating in any given year.

Several factors have contributed to this shift. There was a substantial increase in the annual total area burned by wildland fires. Annual harvest rates have shifted dramatically in response to economic demand, increasing in the 1990s and decreasing sharply with the global economic recession. Unprecedented insect outbreaks have occurred.

Planting trees and conserving forests is an important step towards reducing our carbon footprint, but it won’t do the job on its own. It’s crucial that we reduce our carbon emissions and our dependence on fossil fuels to keep our forest working as carbon sinks.

The man continues to interfere with carbon sinks, but sometimes in a positive way. Efforts are underway to protect and rejuvenate natural sinks that we have degraded over time. These include:

Carbon is an essential element of life, and the carbon cycle is a critical process for our Earth. Carbon sinks play a primary role in the global carbon cycle and are vital to the world and every living, breathing being that is in it. They control the amount of carbon concentration that is found in our environment and keep our lives healthy and the air that we breathe worthy of breathing in.

What can you do to help? Plant a garden, or grow a tree. By some estimates, one single tree can lock away a ton of CO2 by its 40th birthday. Also, planting trees around your home or office building provides shade in the summer that can reduce the use of air conditioners powered by fossil fuels.

There are many ways to get involved; the important thing is to get engaged and understand how important the ocean and our land really is and do your part to help further reduce emissions. Vow to change and do more to protect those carbon sinks that the world needs. This is our world, and we must all come together in order to solve a problem. We need these carbon sinks greatly, and we need to do everything within our power to protect them.