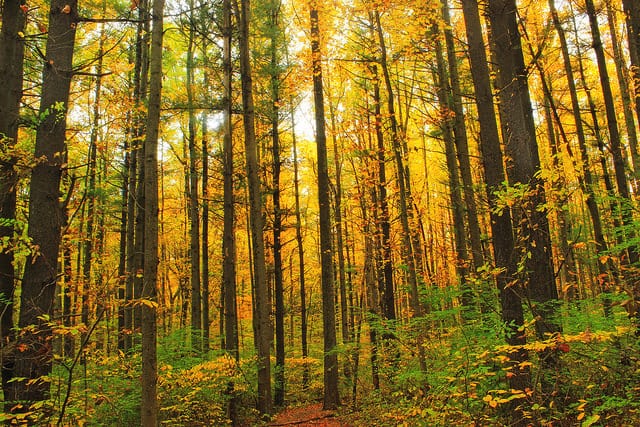 Biomes are those regions of this planet where plants, animals, insects and people live in a particular type of environment. While the hot and humid biome, called the tropical rainforest exists, in Brazil, the frosty biome, called the Arctic tundra, exists in Alaska. The flora and fauna are adapted to that particular temperature, and any small change in temperature can lead to an increase or decrease of a certain species of plant or animal. The climate and geography of a region determine what kind of biome can exist there.

The plants and animals living in each biome are as different as their climates. No organism in the biome lives alone. Each organism, in one or other way, is dependent on other living or non living things in its surroundings. The survival of biomes and its organisms depends on ecological relationships throughout the world. The exact number of biomes in this world is still not known. Major biomes include Tundra, Rainforests, Deserts, Tundra, Grasslands, Mountains and Forests.

Major Biomes of the World

The coniferous woodland biome is found in the south of the Arctic tundra. It extends from Alaska, across North America, to the Atlantic Ocean, and crosswise over Eurasia. The biggest stretch of coniferous woods on the planet, in the Northern Hemisphere, is known as the “Taiga(TY-guh) or boreal forests.” These woodlands are comprised principally of cone-bearing trees, for example, spruce, fir, and hemlock, which are appropriate for the cool atmosphere.

The temperature in the coniferous biome goes below the freezing point for most of the time, and the weather remains cold with only snowfall. Due to such harsh conditions, not many plant species exist there. Animals like ermine, the moose, the red fox, the snowshoe rabbit thrive in this biome. The cold weather makes it very difficult for plants and animals to survive.

This biome is in the Northern Hemisphere. Significant areas of deciduous forest are found in eastern North America, Europe, and East Asia. The word “Deciduous” means “out at a certain season.” This is why Deciduous means a forest where leaves fall out of the trees during winters. The characteristic rotting of the fallen leaves enhances the dirt and helps to support a variety of types of animal and plant life.

In any case, the fruitful soil is likewise useful for individuals, and in Europe, the greater part of the deciduous woods have been cut down to make space for farms and homes. This is the reason why most of the Deciduous forests have now disappeared.

The trees in Deciduous forests lose their leaves during winter, and the color of leaves changes during autumn. The most common types of trees are known as ash, oak, lime, beech, birch and northern arrowwood. As soil is fertile, some of the great agricultural regions are found in this biome.

A desert is a zone where almost no life exists, primarily due to an absence of water. Researchers gauge that around one-fifth (20%) of the world’s surface is desert that receives little (less than 50cm/yr) or almost no rainfall. Deserts can be found on every continent, aside from Europe. There are two main types of desert that you can find: hot and dry, and freezing and cold. The absence of water and extraordinary heat or cold makes this biome a poor choice for most life structures. A large portion of the plants you’ll see in the desert are types of cacti. The Great Basin, the Mojave, the Sonoran, and the Chihuahuan are the four major deserts in North America.

Hot and dry desert don’t have many plants as the temperature can reach up to 49 ° C. They have high temperatures because of little vegetation cover, less cloud cover, little rain, and high exposure to the sun. Most of these types of deserts are found near the Tropic of Cancer or the Tropic of Capricorn.

Cold deserts are found near the Arctic part of the world where temperature can go till 26 ° C during summers. They can have quite a bit of snow during winters and rain around spring.

Grasslands are areas with hot, dry atmospheres that are ideal for developing food. They are known all through the world by distinctive names (prairies in the United States; vald in Africa, etc.). This inland biome is made of tremendous regions of green fields. It gets so little rain that not very many trees can develop. The U.S. prairies are utilized to feed cows and to raise grain crops.

There are 2 main types of grasslands: Tropical grasslands called Savannas and Temperate Grasslands. Savannas cover more than one-third area of Africa and large areas of Australia, South America, and India. Savannas are found in hot and warm climates. The soil in Savannas is thinly layered, does not hold water and contains nutrients from dead plants. Temperate grasslands can be found in South Africa, Argentina, and some plains in Central North America. Temperate in temperate grasslands varies from summer to winter, with high temperatures in summer and freezing temperatures in winter.

Mountains exist on all the main continents of the earth. A large portion of the world’s mountains lies in two very large chains. The Circum-Pacific chain, regularly called the Ring of Fire, runs from the west bank of the Americas through New Zealand and Australia and up through the Philippines to Japan. The other significant chain, called the Tethyan range, extends from the Pyrenees to the Alps to the Himalayas until finally ending in the area around Indonesia.

Mountains are normally found in gatherings called ranges or chains, even though you can find ones that stand by themselves in certain areas. A mountain biome is exceptionally cool and breezy. The higher the mountain, the colder and windier the biome is. There is additionally less oxygen at high heights, which can make it difficult for some people and creatures to reside there. Animals in this biome like a mountain goat, yak, sheep, are excellent climbers and can move freely on the rocky landscape.

Tropical rainforests are found in Asia, Africa, South America, Central America, and on a significant number of the Pacific islands. They are frequently found along the equator. A large portion of the world’s tropical rainforests is in the South American nation Brazil. There are different sorts of rainforests as far and wide as possible, as well. For instance, northern Australia has a “dry rainforest” that encounters a dry season every year, and the blustery Pacific Northwest in the United States has a “mild rainforest” that is made up of evergreen trees. Tropical rainforests get no less than 70 inches of rain every year and have a greater number of types of plants and creatures than any other biome.

The Arctic tundra is a frosty, unlivable, treeless territory of low, swampy fields in the far north around the Arctic Ocean. It includes the northern terrains of Europe, Asia, and North America, and also the greater part of Greenland. An alternate sort of tundra is the elevated tundra, which is a biome that exists at the highest points of high mountains. This is the world’s coldest biome. Since the sun does not actually rise in these biomes for almost half of the year, it is not bizarre for the temperature to be below -20 degrees (Fahrenheit) in winter.

The ground of the Arctic tundra has forever solidified subsoil, called permafrost, which makes it hard for trees to develop. Many fossils have been found in the permafrost that is located in these biomes.

The tundra has winter and summer as the main seasons. Springs are short and fall between summer and winter. It is one of the coldest and driest biomes. The soil is known as permafrost, the permanent frozen layer of earth. The tundra biome has animals like mountain goats, marmots, beetles and butterflies.

This biome is also known as the Mediterranean scrub forest. Communities are dominated by shrubs and are known as chaparral. It experiences hot, dry summers; cool, moist winters; thin, nutrient-poor soils; periodic fires. This is marked by limited winter rain followed by drought the other times of the year. The temperature is moderate under the influence of cool, moist air of the oceans. The biome extends along the Mediterranean.

This covers the Pacific coast of North America, Chile, South Africa and South Australia. This biome has broad-leaved evergreen vegetation. The vegetation is generally made up of fire-resistant resinous plants and drought-adapted animals. Bush fires are very common in this biome. The growth of dense, low plants that contain flammable oils makes fires a constant threat.

Water is a major natural resource that is the basis of life. It supports life, and countless species live in it for all or part of their lives. Freshwater biomes supply us with our drinking water and water for crop irrigation. This water biome is named for the low concentration of salt found in the water. Because salt is important for the body to function properly, the plants and animals here have many adaptations that help them save salt. This includes most ponds, streams, lakes, and rivers.

Freshwater biomes have suffered mainly from pollution. Runoff containing fertilizer and other wastes and industrial dumpings enter into rivers, ponds, and lakes and tend to promote abnormally rapid algae growth. When these algae die, dead organic matter accumulates in the water. This makes the water unusable, and it kills many of the organisms living in the habitat.

This water biome is the largest biome in the world, as it includes the five major oceans that cover 70% of the Earth. Marine water has high levels of salt, so animals and plants living here have adaptations that help them get rid of salt or take on water.

The world’s oceans affect the global climate highly, as forests do. Water has a high capacity for absorbing heat, and because the Earth is mostly covered with water, it keeps the temperature of the atmosphere fairly constant and able to support life. In addition to this climate-buffering capacity, the oceans contain several billion photosynthetic planktons, which account for most of the photosynthesis occurring on Earth. Without these, there might not be enough oxygen to support such a large world population and complex animal life.

Overfishing and pollution have threatened oceans to face ecological disaster. Industrial pollutants that are dumped upstream of estuaries have rendered many marine habitats unsuitable for life.

We need to gain knowledge for a better understanding of how to preserve the Earth’s natural biomes. By educating people about the consequences of our actions, the adverse effects in biome may be reduced. The areas that have been destroyed the most will never regain their original forms, but conservation will help to keep them from getting worse. There need to be stricter regulations to prevent further destruction of the biomes.