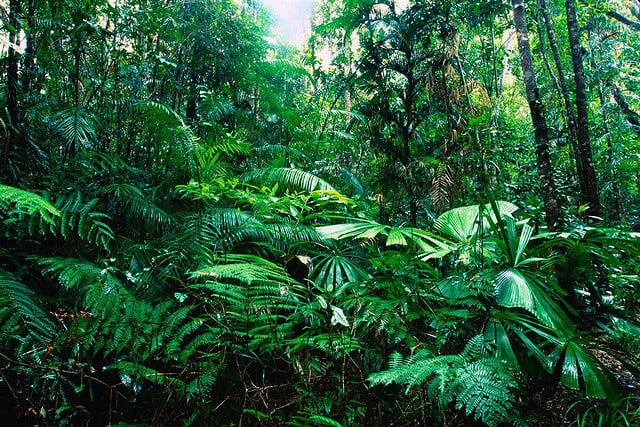 Rainforest is described as a tall, hot and dense forest near the equator and is believed to be the oldest living ecosystem on Earth, which gets the maximum amount of rainfall. If you don’t know too much about tropical rainforests, then you will probably be surprised to find that there are a few little known facts out there about them.

This type of habitat is very different in comparison to many of the other habitats that you are used to being around. Here you will find 45+ remarkable facts about the tropical rainforest that you may not have known previously.

Below are 45+ Facts on Tropical Rainforests

Fact 1: Rainforests only cover around 2 percent the total surface area of the Earth and about 6% of the Earth‘s land surface, but about 50 percent of all known species of the plants and animals on the earth live in the rainforest.

Fact 2: Rainforests are the forests that receive a high amount of rainfall. The tropical rainforest is very rainy, as its name implies. The rainfall gets at least 250cm and can reach up to 400-450 inches in one year. The water rainforests produce is evaporated and then used as rain in other areas.

Fact 3: You can find rainforests in many countries, not just in South America. They can be found in Alaska and Canada, as well as Asia, Africa and Latin America.

Fact 4: Rainforests are found on all of the different continents, except for Antarctica, because it is far too cold there for the environment to be conducive.

Fact 5: There are two different types of rainforests, and they include both temperate and tropical. The tropical rainforests are the ones that are most commonly found around the world.

Fact 6: Rainforests help to regulate the temperatures around the world and the weather patterns as well. They also cool and regulate local micro-climates limiting the Earth’s reflectivity that stabilizes ocean currents, wind, and rainfall patterns.

Fact 7: A fifth of our freshwater is found in tropical rainforests. Scientists estimate that about 15% of the world’s freshwater flows from the Amazon Basin to be exact.

Fact 8: Rainforests play an essential role in maintaining the Earth’s limited supply of drinking water and freshwater, so they are crucial to the sustainability of the earth. Rainforests add water to the atmosphere through the process of transpiration, by which plants release water during photosynthesis from their leaves.

Deforestation reduces the moisture released into the atmosphere decreasing rainfall and leading to drought.

Fact 9: Rainforests are so rich in biodiversity that about 1/4 of natural medicines have been discovered in rainforests. They hold enormous potential for future discoveries.

Fact 10: Within four square miles of tropical rainforest, you will find 1500 flowering plant species, 750 types of trees, and many of these plants can help combat cancer. Some pine trees in Tasmania’s temperate rainforests can live for 2,000 years!

See also  How Many Amps Does a House Use? (Explained)

Fact 11: 70% or more of the plants that are used to treat cancer are found only in the tropical rainforests on the planet. According to research published in the International Journal of Oncology, more than 60% of anticancer drugs originate from natural sources, including rainforest plants.

Fact 12: Over 2000 types of plants that you find in the rainforest can be used to help aide in cancer treatment because they have anti-cancer properties.

Fact 14: Less than one percent of the species of plants in the tropical rainforests have actually been analyzed to determine their value in the world of medicine.

Fact 15: Rainforests are threatened each and every day, especially by practices such as agriculture, ranching, logging and mining.

Fact 16: There were around 6 million square miles of rainforest in the beginning, but now because of deforestation, there is only less than half of that still found in the world.

Fact 17: If the rainforests continue to decline in the way that they have been, then about 5-10 percent of their species will go extinct every ten years.

Fact 18: 90% of the world’s forests is in underdeveloped or developed countries around the world.

Fact 19: Every second, there is part of the rainforest that is cut down. In fact, you probably lose a football pitch vanished every six seconds, which means over 80,000 football fields worth of rainforest each and every day.

According to Global Forest Watch, our planet loses tropical forestland equivalent to the size of Bangladesh every year. In 2017 alone, we lost 15.8 million hectares of tropical forests; all told, humans have destroyed nearly half of the world’s original forest cover.

Fact 20: There are a lot of different types of animals that can be found in the rainforest. Tropical rainforests cover less than 3% of Earth’s area; still, they are the habitat of more than half our planet’s terrestrial animal species.

Most of them cannot live anywhere else because they depend on the environment of the rainforest for their most basic needs.

Fact 23: The average temperature of the tropical rainforest remains between 70 and 85° F.

Fact 24: Timber, coffee, cocoa and many medicinal products are few of the products produced by rainforests, including those used in the treatment of cancer.

Fact 26: Trees in tropical rainforests are so dense that it takes approximately 10 minutes for the rainfall to reach the ground from the canopy.

Fact 27: About 80% of the flowers found in Australian rainforests are not found anywhere in the world.

Fact 29: Insects make up the majority of living creatures in the tropical rainforest.

However, many of these species are on the brink of extinction, and their existence is crucial to maintaining the balance of rainforest ecosystems.

Fact 33: At the current rate of depletion, it is estimated that 5–10 percent of tropical rainforest species will be lost per decade.

Fact 34: Most of the tropical rainforests, approximately 57 percent, are located in developing countries.

Fact 35: About 70% of the plants identified by the U.S. National Cancer Institute, which can be used in the treatment of cancer, are found only in rainforests.

Fact 36: In a 2017 analysis published in the scientific journal PNAS, climate scientists concluded that forest conservation/restoration, natural climate solutions and sustainable agriculture could provide more than one-third of the global climate mitigation required to stabilize warming to below 2 °C.

Fact 37: Tropical forests have become net carbon emitters. A 2017 study published in the journal Science reveals that tropical forests that once served as the Earth’s most massive carbon sinks now release more carbon than they absorb, triggered by deforestation caused by humans.

Fact 38: Some rainforest monkeys are omnivores, eating both animals and plants. Flying animals of Asian rainforests include frogs, squirrels and snakes.

More than 2,000 different species of butterflies are found in the rainforests of South America. Bats are essential for the pollination of many tropical foodstuffs such as bananas and mangoes.

Fact 39: In the moist rainforests of South and Central America, sloths move so slowly that algae are able to grow in their fur and also carry beetles and cockroaches in its fur!

Fact 40: Most of the animals living in tropical rainforest live in the trees. There they can find all of their necessities and rarely have to come down to the floor of the forest.

Fact 42: The variety of plants in rainforests is amazing. There are over 2,500 different vine species in the tropical rainforest. Some even have a thickness that equals the circumference of a human being.

Orchids, a type of epiphyte plant grows on the surface of other plants in the tropical rainforest. Giant bamboo plants can grow up to 9 inches a day.

Fact 43: There is a surprising variety of animals. In Central American rainforests, rival strawberry poison dart frogs might wrestle for up to 20 minutes!

The rhinoceros hornbill bird from southeast Asian rainforests has a hornlike structure on its head that looks like an extra beak! The calls of black howler monkeys of Latin American forests can be heard almost 5km away!

Fact 44: Some people choose to live in the tropical rainforest and become farmers for the food and spices people eat. The Korowai people of New Guinea live in tree houses as high as 45m off the ground! Rainforests provide people with many cooking spices such as vanilla, allspice, and black pepper.

Fact 45: A lake inside a rainforest on the Caribbean island of Dominica sizzles at around 88°C.

Fact 46: Forests are natural water filters that keep pollution and debris from flowing into water supplies and slowing the movement of rainwater that it flows into underground reserves.

When it comes down to it, it is really important to preserve our world’s rainforests. If you think about how much of an impact the rainforests actually have on our life, even if we don’t live anywhere near a rainforest, you will really see the importance of keeping them around.

There are hundreds of other interesting facts out there about rainforests that may surprise you as well. If you haven’t taken any time to learn about the rainforest, then most of this information may actually be new to you. If you have learned about it, whether from school or other sources, then you may know most of this information, if not all of it.

Try to learn more about the tropical rainforests and what you can do to help preserve them. After all, it really just takes everyone doing their part. Even if you think that you can’t make a difference, you are wrong. Everyone can make a difference, and when you think about it – you have to be the change that you would like to see in the world, and if you do this and set a great example, others will do the same.