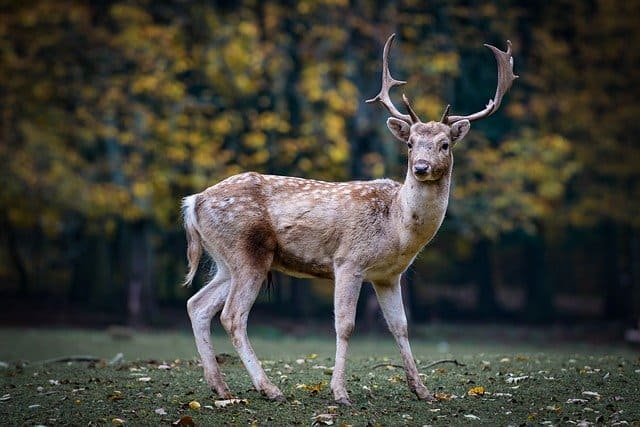 Deer is a wild animal that belongs to the Cervidae family. It is in the order of Artiodactyla, which means mammals with even toe hooves with each one of their foot having two small and two large hooves. Deers have about 50 species such as the reindeer, red deer, elk, white-tailed deer, and moose among others. Deer were originally found in continents such as Asia, North America, Northern Africa, Europe, and South America, the were, later on, take to countries like the Republic of South Africa, New Zealand, and Australia.

They also have one distinct characteristic that distinguishes them from the rest of the ruminants in that, almost every species of deer have antlers. These are an outgrowth structure that originates from the head and does not have Keratin present like the one found in true horns. Deers live in habitats with plenty of woodland terrains, especially those that are rugged and it is perhaps the reason they have long and robust legs, and compact and flexible bodies to help them survive in such environments.

Their environment is mostly green and woody, although some prefer tundra and grassland biomes. The sizes of deer vary as some are humongous while others are very tiny. The Southern Pudu weighs about 9 KG goes as far as 14 inches tall when at full maturity making it the smallest of the family. The moose can weigh up to around 820 KG and go up to 6.5 inches tall at full maturity making it the largest of the family.

Deer are at a lot of risk of death in their habitat because of the environmental challenges and their numerous predators. Still, a deer can live up to between 10 to 25 years, varying from one species to another. Deer eat plants, leaves, fruits, nuts, grass, and acorns. So they are technically herbivores. Owing to all this information about deers, they boast many amazing facts. This article, therefore, looks to expound more than 30 facts about deer.

30+ Amazing Facts About the Deer

1. Deers’ eyes are on the side of the head. This gives deer a wide vision angle of 310 and degrees making it almost impossible to focus on a focal point. They, however, have impressive night vision, which is essential during their feeding time and escape from predators.

2. Deer have great hearing senses. Deer can move their ears and make them face different directions without moving their head because of the muscles it possesses. It also picks up sound frequencies higher than humans.

3. Great sense of smell. Their sense of smell picks up predators from far distances. They keep their noises moist by licking them which sticks odor and improves their smelling ability.

4. Deer walk in groups called herds, they are social animals. They can walk in sexes or have a dominant male leader. A male herd can watch over female herds. The herd could have up to 100,000 members.

5. Deer have special ways of communication. They communicate through visual, vocal, and chemical means. They have a scent produced in various parts of the body that gives important information such as physique, sex, social status, and whether there is danger looming in an area.

6. Deer practices both monogamy and polygamy. Since the breeding season is short for most species, they also exhibit different characteristics, a male may have a territory that has one or more females, several males may come together to protect a harem (female group) or just travel to different herds looking for mates.

7. Some antlers grow during the spring season. In areas where the climate is temperate, deer grow antlers that are covered with velvet which is a skin covering which has nerves and blood vessels in abundance. They shed off when the antlers reach maturity, antlers are important for male deer especially during mating season as it helps the male win female deer over.

8. Deer have a gestation period of between 180 to 240 days. The young one of a deer is called a fawn, they can only give birth to one or two young ones at a time, and three is very rare. Larger species of deer call their young one calves. A fawn gains the ability to stand on its own within 10 minutes of being born and walks within seven hours. This is very impressive.

9. Deer come in different color variations. Deer are either very light brown or really dark, the young ones of a deer have spots that act as a protection mechanism against predators.

10. Fawns do not have a detectable smell. Predators are not able to pick up on the smell of fawns which makes it easier to hide them. Mothers stay with the fawns for a period of 1-2 years, while they are still feeding them, they hide them in safe areas and feed them up to 6 times during the day.

See also  Do Deer Eat Hydrangeas? (And 6 Ways To Keep Them Away)

11. Chinese water deer do not possess an antler. They are the only deer species that do not have antlers, they use a very long canine tooth that they show off in order to impress their female mates.

13. Some of the deer species are endangered. According to the IUCN’s red list of endangered species, the hog deer, Persian fallow deer, chinanteco deer, bawean deer and calamian deer are considered endangered. The Pere David deer can only be found in caged population as they ceased to exist in the wild population.

14. Deer are an important part of the ecosystem. Deer are considered prey to many wild animals, even humans hunt them down which makes them an important link in the food chains.

15. Deer antlers grow so fast. The tissues present in the antlers of a deer grow faster than any other tissue on the planet.

16. The Irish elk was the largest species of deer to have existed. Although now extinct with the last one dying over 11, 000 years ago, it was 7 feet up to the shoulder and had antlers that made it 12 feet tall from tip to tip making it the largest known species. The Pudu goes only up to 32cm tall.

17. Deer were part of the cave paintings. Paleontologists found deer as part of the artwork in the caves and they have been a great part of that history.

Other facts of deer in different locations

18. Herders of reindeer in Finland have been painting the reindeer antlers using reflective paint, this is done as an aim to reduce accidents with cars.

19. The Seneca Army Depot inadvertently boxed in a rare species of white deer and due to its closure, the deer are under the risk of becoming extinct.

See also  Do Deer Eat Sunflowers? (And How To Keep Them Away?)

20. Mammals share similarities in the way their young ask for help when in distress. A Canadian study exhibited that mother deer hear the call of other young ones in distress like cats and dogs.

21. Some species of the deer have been recorded on film eating infant birds, this is uncanny as deer are primarily herbivores.

22. The smallest North American deer, the key deer can swim in between islands and do not fear humans due to the numerous interactions. They are however endangered.

23. In Germany, there is a deer specie that does not cross over the border of the Iron Curtain despite it being physically present for over two decades now.

24. In South Carolina, people receive tax relief when they hit a deer with their car and give out the meet for a notable cause.

25. In North America, deer are considered the biggest threat to humans among all mammals.

26. In Canada, deer trapped in frozen lakes are taken to shore using a helicopter downdraft.

27. A female deer digests its fetus naturally when subjected to harsh conditions that leave it malnourished.

28. Male red deer makes itself ejaculate by rubbing its antlers against the grass

29. England has a law that permits hunters to shoot down deer from an aircraft when the engine is turned off and the craft is stationary.

30. When male deer lose their testicles the antlers stop shedding and they become super light. The velvet does, however, continue to grow on the existing ones.

31. Trees have a defensive mechanism where they produce an excess amount of acid in order to become bitter and make the deer lose interest in consuming them, they can identify deer saliva

32. In Yakushima, a Japanese island, deer are groomed and provided with food by macaque monkeys. They, in turn, let the monkeys ride on their backs to move from one place to another.

33. A British woodsman made dentures out of a deer he had shot in order to eat it since he had no teeth of his own, this was in the late 1960s.

34. Deer are color blind to neon orange, which is why hunters where jackets of that color in order to increase their chances of gunning down a deer.