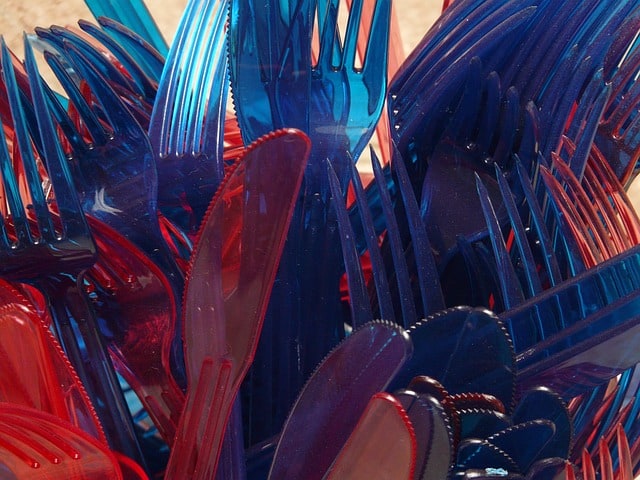 Cutlery is a collective term used to describe the tools used for the preparation and handling of foods or drinks. They form part of the general term ‘utensils’. Cutleries are commonly made of plastic, aluminum, or steel. But the concern is how plastic cutleries are easily disposable, which has led to vast environmental pollution by plastic cutlery.

Single-use plastic cutlery has especially become easily disposable leading to plastic pollution and environmental degradation. A most common example of plastic cutleries that are readily disposed of include straws, forks, plastic cups, and plastic plates. This article seeks to reflect more on the growing impact that plastic cutlery pollution has on the environment and the possible solutions to the menace.

Fast joints offer fast foods in plastics which are easy to dispose of. Plastic food dishes, straws, forks, and spoons are packaged together with this food to enable the consumer to eat then later dispose of the unwanted. More than half of the plastic used is thrown away without being considered for recycling or being put to other uses.

This has led to the deposition of this plastic cutlery into waterways such as oceans, rivers, and seas, contaminating the waterways. And to make matters worse, these are the same sources used for providing water for domestic use, water for industrial activities, and water for drinking.

Plastic cutlery is used almost everywhere and anywhere, be it at the office or in outdoor meetings. Outdoor activities such as camping or visiting game reserves mean that food has to be homemade and packaged to avoid excessive costs for the trip.

There is the option of buying fast foods that will last the whole trip. These foods are most likely packed in plastic food containers and will be served with plastic spoons, forks, plastic cups, and plastic plates.

By the end of the trip, these plastics will not be repackaged back to the travel bags for reuse nor will they be washed for use again. They will be disposed of in the same park that has wildlife.

Wild animals will feed on these items, with some animals mistaking them for food, and end up being choked to death or causing severe injuries to their bodies. The consumption of plastics can also clog up the stomachs of the animals if they don’t injure or cause their death.

Since plastics contain lots of chemical contaminants that are bio-accumulative, their consumption by herbivores in the game parks may lead to the extinction of some of the keystone apex species such as lions, leopards, and cheetahs because the logic will be that they consume most of the plastic.

Plastic cutlery has a lot of impacts even before it gets to the market. This is because there is a lot of energy and carbon that are emitted during their production leading to the addition of heat and carbon to the atmosphere. This carbon, in the form of carbon dioxide, combines with other greenhouse gases such as methane and ends up causing devastating climatic changes.

The presence of plastic cutlery on large water bodies means that there is a cause of suffocation for marine life. Various species in marine waters depend on the circulation of air that comes from the atmosphere and diffuses into the water. Plastic pollution ends up covering the water surface leading to the impermeability of air to the water masses.

In addition to this, the few that survive ingestion get caught by fishermen and used as food which subsequently is a health hazard. Due to bio-accumulation, the small broken particles ingested by fish end up being greater and greater in concentration as it moves vertically in the food chain with a man being at the apex.

5. Degradation of the environment

Most of the chemicals released during the production of plastics such as vinyl chloride and benzene are carcinogenic and neurotoxic. The use of plastic cutlery also leads to massive disposal of plastics leading to the filling of landfills. Without clear directives on how to discard plastic cutlery after use, they can be found spread all over the streets thus dirtying the environment.

At times, some people resort to burning the cutlery plastic waste, which ends up releasing lots of toxins into the atmosphere. These toxins mix with the same air that living organisms, both plants, and animals, take up. The take up of this contaminated air over a long period of time may lead to a myriad of respiratory diseases for humans, especially those that can be cancerous.

7. “Plastic menace” – Plastic is slowly covering the surface of the earth

Plastics are being deposited almost everywhere on land creating a global “plastic menace.” Even farming lands are riddled with plastics that were discarded 300 years ago. Waterways are also covered by plastics.

Cases have been reported and pictures are taken where plastics float on water over a vast area to an extent that one cannot even know whether there is water or land below those plastics.

The sea bed is also becoming a deposit of plastics. And even more shockingly, plastics have been sighted piling as far up as the Everest – the tallest mountain in the world. Plastics have also been found in Henderson Island, an island in the middle of the Pacific Ocean. What’s more, during a study trip by scientists to the continent Antarctica, whose climatic conditions do not support human life, plastics were discovered there.

8. Harmful to the health of humans

Risks of developing kidney stones, breast and liver cancers, reduced sperm count, and hormonal imbalances in humans are from the plastic cutleries used on a daily basis. Eating hot meals on plastic crockery could increase risks of these health conditions for both adults and children because when plastics are exposed to high temperatures or heat; toxins such as dioxin, Biphenyl A, and Phthalates – chemicals used to make plastic soft are released. They then get consumed with hot food.

Some Affordable Solutions to Plastic Cutlery

This is the easiest way to cope with the use of plastic cutlery especially for households and even for restaurants. By using metallic cutlery, only regular washing of utensils is needed. This means that there is no disposal and this cutlery can last longer while still serving its purpose.

2. Use of compostable cutlery

Metallic cutlery is a good alternative to plastic cutlery but it has its disadvantages, especially for a large party where it can be quite costly. In such cases, compostable cutlery can serve as a great substitute. Compostable is biodegradable and can, therefore, be disposed of in landfills where they are integrated with other compostable material such as organic matter.

A culture of proper disposal of the plastic cutlery after use must be promoted to ensure they are collected and sent for recycling by recycling industries. Recycling can also be done at home. By cleaning the plastic containers or food boxes and cups that have been used; they are reused over and over to store other food materials.

4. Forgoing the use of single-use plastics

Some restaurants have begun the initiative of not purchasing straws and plastic plates for they are one of the most disposed single-use plastics. Instead, these restaurants have opted to provide beverages without them and food on paper plates thus, reducing plastic waste and its impact on the environment. Nonetheless, there are metal and bamboo straws that have been availed in stores as suitable alternatives for plastic straws.

5. Use of edible cutlery

Bakeys is a company that manufactures edible cutlery such as spoons. With its motto ‘the future is edible’, its sounds appealing and visionary. It makes its cutleries from millet, rice, or wheat.

Once it has served its purpose, it can either be eaten or fed to animals. Besides, there is no health implication caused by this kind of cutlery and with more advances, it promises to reduce both plastic waste and plastic pollution.

The count of plastic bottles is very high in the environment. This is caused by regular buying of water from shops and other outlets which cause the disposal of these bottles.

One way to reduce this is by using a reusable water bottle. People should train themselves to carry water from home in reusable bottles to avoid the purchase of water bottles and therefore, reduce plastic waste.

7. Carry your own cutlery

For those who tend to eat out most of the time or have to get packaged food to eat in the office, they need to embrace the practice of carrying around spoons, forks, portable food boxes, and cups. This can help towards reducing plastic cutlery disposal, particularly plastic forks, and spoons.