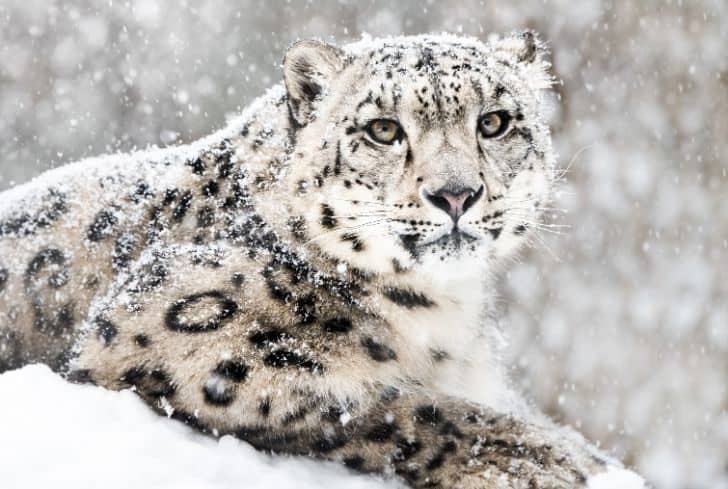 The Panthera uncia, commonly known as the ounce or the snow leopard, is a large cat, known to be elusive and perfectly suited to survive in extreme and high elevation habitats. The cat is rare to find and is native to the mountainous ranges of Central and South Asia. Their total number is estimated to be between 4,000 and 7,000, and as a result, they have been classified as vulnerable, since 2017.

Due to the constant threat of poaching and the destruction of their habitats, their total population is projected to decline by about 10% by 2040. Luckily, there are some organizations that are trying their best to preserve and ensure the cat does not become extinct.

The snow leopard was formerly the Uncia uncia. The classification was later modified and accepted by the IUCN Red List in 2008, therefore making the cat part of the Panthera genus. Other cats in the genus include the leopard, lion, jaguar, and tiger. Their anatomical structure enables them to roar, although the snow leopard does not roar. Snow leopards have white-grey coats spotted with large black rosettes.

The snow leopard can grow between two and five feet in length. They have a powerful build making them able to scale high steep slopes with ease. They also have strong hind legs, making them able to leap six times the length of their bodies. A snow leopard also has a long tail which gives the cat immense balance and agility. Additionally, the tail wraps around the resting cat as protection from the cold. The tail averages at 36 inches and the animal could weigh between 60 and 120 pounds.

Where Do Snow Leopards Live?

Snow leopards, as already mentioned, have evolved to survive the harshest conditions on earth. They are ideally suited to withstand the rocky mountainous regions of Central and South Asia. They are common in at least twelve countries, including China, India, Mongolia, Pakistan, Bhutan, Russia, Nepal, and Afghanistan.

Unfortunately, their global population is dropping, meaning they might become completely extinct in some of these countries. The mountainous locations of the nations mentioned are rich with prey for the snow leopards, like the hares, marmots, Argali wild sheep, pikas, blue sheep, and ibex.

Why Have Snow Leopards Become Endangered?

Although they have unique locations where they reside, their sole predators are humans. Humans have been known to dangerously hunt, retaliate against, and destroy the snow leopard’s habitat. Local farmers kill snow leopards as the cat preys on their livestock. They include yak calves, sheep, horses, Argali sheep, and goats. The cat has been forced to kill livestock for survival as some of their prey, are also hunted by local communities. In the end, they are hunted by the people in retaliation.

2. Destruction of their habitat

since they live in mountainous regions, climate change has become their biggest challenger. Climate change poses the greatest long-term threat to cats. Its impact could result in the loss of up to 30% of the snow in the Himalayas. Their habitats are also slowly declining from human settlement and the increased need for grazing space. The development continues to fragment the ranges upon which the snow leopard survives.

Another reason why they are becoming endangered is that there is ineffective protection. Most protected areas are too small to protect the home range of the snow leopard since it resides in quite a large geographic area. Unfortunately, most of these countries will not be able to afford to pay rangers to protect the endangered cat.

5. Lack of support and awareness

there is little to no knowledge about the snow leopard. Most herders are unaware of the importance of the snow leopard in the ecosystem and are not aware of why it needs to be protected.

Why Are Snow Leopards Important?

1. They are top predators

Snow leopards play a remarkable role as top predators, which means that if they flourish, they aid in creating a balance in the food chain, thus allowing other species and ecosystems to thrive as well. They, therefore, play a very fundamental role in the high-altitude habitats where they live.

Snow leopards, like other wild cats, are known for their beautiful fur and spots. Despite an estimated body length of between 39 and 51 inches, their tails can be just as long as their bodies. They are also known to have beautiful, thick, smoky-grey fur patterned with dark grey rosettes.

They camouflage perfectly as they blend perfectly with the rocky slopes. The animal continues to be unique as they have long hind limbs for leaping, a long flexible tail for balancing, a well-developed chest, and short forelimbs with large paws for maneuvering through the snow.

The snow leopard, unlike other cats, has been built for the cold. They have thick furry tails for wrapping around their bodies and faces, have enlarged nasal cavities, and have long fur with a soft undergrowth.

The cat is usually lonely, except for the females whenever they are raising their cubs. Mating occurs in late winter, and between one and five cubs can be born between 90 and 100 days later. The mothers remain with the cubs for between 18 and 22 months when they become independent. The cat is mostly active at dawn or dusk and may stay in a single area for days before moving for tens of miles away.

How Can You Help the Snow Leopard?

The one thing we need to recognize is that extinction is forever. As already mentioned, their number currently stands at less than 10,000 worldwide, and it will continue to go down unless something is done. This is how we can help the snow leopard:

Raising awareness about the plight of the snow leopards can help them get the protection they need. Most people are unaware of the snow leopard given where it is located. Unlike other cats, it cannot survive outside the mountainous area of Asia, and as a result, people have never heard of it. Therefore, more information needs to be availed to people all over the world, so that they are protected

2. Take action and join other organizations in the fight

there are several organizations, like the World Wild Fund for Nature (WWF) and the Snow Leopard Trust, which are speaking up for species, like the snow leopard, and helping raise awareness about the plight facing such animals.

The WWF, for instance, in 2012, began a four-year project, in partnership with USAID, to conserve the habitats of the snow leopards by promoting water security and preparing the communities for climate change. They conducted the project in Bhutan, Mongolia, Kyrgyzstan, India, Pakistan, and Nepal, six of the twelve countries that host the snow leopard.

Adopting a snow leopard is a project by the WWF where the organization works with locals and supports the research and the conservation of the habitats for the animal. They sell merchandise, like the snow leopard plush, gift boxes and certificates where the funds raised are directed to the protection of the cat.

Interesting Facts About the Snow Leopard

1. Where they live – in harsh, snowy, rugged alpine regions

Snow leopards live in the harsh, snowy and rugged alpine regions of central and south Asia that makes their way of survival very unique. The ideal location to find them is at an elevation of between 3,000 and 5,000 meters. Their wild, dangerous, cold, and desolate living habitats are not where most people would love to live. China boasts of about 60% of all snow leopards in the area and indeed the world.

The ordinary lifespan of a snow leopard is between 15 and 18 years, although some can live up to be 25 years old. They mature pretty quickly as they reach sexual maturity at between two and three years of age.

3. A single meal can sustain a snow leopard for up to two weeks

As already mentioned, the carnivorous animals feed mostly on sheep and other prey. A single meal can sustain the snow leopard for two weeks, mainly because they live alone.

Snow leopards are highly elusive and solitary creatures, something that makes them very unique. They easily blend with their environment owing to their camouflaging spots and color. They mostly hunt at dusk and dawn.

The snow leopard’s thick and long tail assists the cat with balance, especially when cresting through narrow ridges, when hunting on extreme terrain and when navigating through treacherous crevasses. When resting, the tail acts as a scarf for warmth. The tail also stores fat that can be utilized when they do not have food.

A snow leopard can jump up to 15 meters, and because of its weight, it can take down three prey at the same time. Surprisingly, they can jump 6 meters vertically, enough to reach the gutter on an average two-story house.

Unlike other cats, snow leopards cannot roar as they have different and less developed vocal cords. Instead, they hiss, growl and mew, unlike a domestic cat, although louder.

8. It is very tough to spot snow leopards

It is tough to locate a snow leopard as they are very elusive and are well camouflaged. They are, in fact, referred to as the ‘ghosts of the mountains.’

9. How they survive in the cold

They have a large and muscular chest, allowing them to take deep breaths, helping in the absorption of oxygen from thin air. They have similar hemoglobin as other cats, and so far, scientists believe they manage to survive by breathing harder.