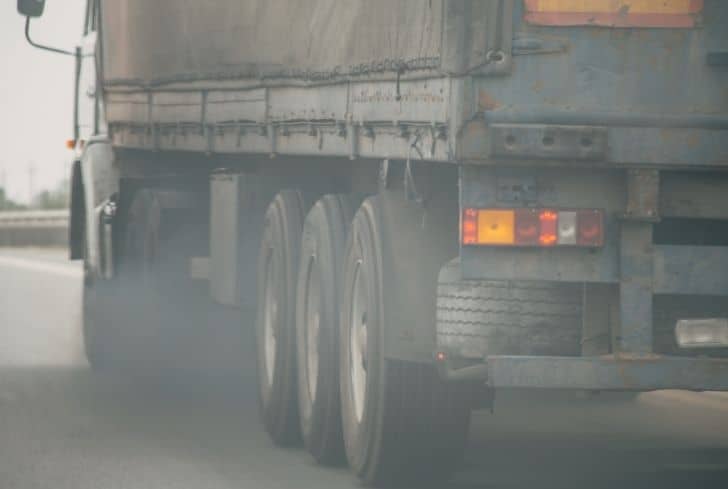 For decades, we have become accustomed to gas-powered vehicles, so much so that their population is in the billions today. These vehicles help us move from one place to the other, while some act as homes. However, they all emit dangerous gases and other pollutants, generally known as vehicular pollution. Here are some more details describing the causes, effects, and solutions of vehicular pollution:

In most urban cities, the number of motor vehicles is high and as such, there is a congestion of traffic. When these many vehicles congest in a singular area, the emissions per kilometre go up, contributing to vehicular pollution.

The carbon dioxide and volatile organic compounds (VOCs), which include halocarbons, hydrocarbons and oxygenates, are observed to be 250% more in urban and congested areas than areas with moving traffic, and result in the formation of secondary pollutants. In 2013, for instance, the transportation sector was responsible for more than 50% of all carbon monoxide and nitrogen oxides as well as almost a quarter of all hydrocarbons in the air

There are several issues with gasoline engines that could result in vehicular pollution. For instance, evaporative emissions occur when fuel gets mixed with the atmosphere by getting evaporated from fuel tanks or carburetors.

Also, in four-stroke gasoline engines, if combusted fuel and air-fuel mixture from the carburetor, escape past the piston rings, enter the crankcase and then get leaked into the atmosphere through the vent, a crankcase blow-by occurs.

Over the last few decades, more and more vehicles are being produced. The population of motor vehicles is estimated to hit 1.1 billion in 2020, with Europe and the USA contributing to about two-thirds of the world’s vehicle population. This rapid growth in the number of vehicles in the world means more gas is combusted, leading to more emissions and increased air pollution.

motor vehicles rely on gasoline for locomotion to take place. However, gasoline is made up of hydrogen and carbon atoms, which together make hydrocarbons, constituting gasoline and diesel. It means no matter what, carbon and nitrogen particles or compounds will be released into the atmosphere as soon as gasoline is combusted, regardless of the engine.

When there is perfect combustion, oxygen converts all hydrogen in gasoline into the water and the carbon into carbon dioxide. However, vehicles also emit other pollutants, which pollute the air and are of particularly harmful effects to humans and the environment.

The combustion process leads to the emission of carbon monoxide, nitrogen oxide, hydrocarbons, sulfur dioxide, carbon dioxide, and particulate matters, which are all harmful to the environment. Particulate matter is responsible for about 30,000 premature deaths annually.

As a result, it contributes to adverse weather such as heavy rains, flooding, and extremely high or cold temperatures linked to the loss of lives, destruction of property, damage to the soils, and sometimes even adversely impacting agriculture.

Vehicular pollution has destroyed the air so much that in some countries, people have to wear face masks, to reduce the number of harmful substances inhaled. In the US particularly, vehicles produce about a third of the nation’s air pollution.

It makes living in such cities uncomfortable, having to walk around with a mask all day, let alone the fact that there are possibilities of developing health complications. The air in such areas is filled with various kinds of pollutants, which greatly reduce the air quality index.

In heavily polluted cities with many vehicles producing such smoke, visibility becomes a huge problem. The matter is worsened when there is fog, which results in the formation of smog (a mixture of smoke and fog).

Pollutants from vehicular pollution can result in lung infections, complications, and even various types of cancers. The hydrocarbons are not good for human health and they can also cause heart disease, damage the central nervous system, make breathing difficult, aggravate asthma and if left unchecked, they could result in premature death.

Approximately 5,000 people die every year because of lung cancers and heart attacks caused by vehicle exhaust fumes. Treating these diseases also requires a lot of money and causes a lot of emotional pain to the relatives of a patient.

The spillage of oil further affects plants, animals and marine life. The health of a nation could also be at risk, especially if the economy will stall after the ability of people to work and generate income is affected.

5. It Results in Acid Rain

One of the gases produced by vehicles is nitrogen oxide and it contributes to the formation of highly corrosive smog which results in the rusting of vehicles and the corrosion of structures.

When the nitrogen oxide dissolves in rain, acid rain is produced, which can significantly reduce the lifespan of buildings made by limestone and marble if they come into direct contact. Besides, any water harvested from this type of rain is not fit for human and animal consumption and can cause stunted growth in plants.

Because of the adverse effects of vehicular pollution, especially the formation of smog, tourism ends up being affected. Most people are not willing to visit cities or countries that are not going to be good for their health or knowing that their visit could led their premature death. The decrease in tourism results in the loss of foreign exchange income.

We are desperately dependent on fossil fuels and the number of vehicles on the roads will continue to increase. We can only try and reduce vehicular emissions by doing our parts, and one of the easiest things to do is drive less and choose alternatives such as walking, using the train or public transportation, and even using a bike. Carpooling is another way to drive less, where people from the same neighborhood or the same area can share one vehicle instead of each using their own.

Most city governments can take action to lower vehicular pollution, seeing that more emissions are produced by vehicles in urban areas because of traffic and the fact that people have to drive slowly in towns. The necessary daily commute to work further worsens the problem of vehicular pollution.

To address the issue, city governments or municipalities can order that no vehicles enter the central business district and instead, they be parked on the outskirts. To overcome the shortage, bus rapid transit systems should be improved, as well as trains that operate within the cities. This would eliminate traffic jams, and lower vehicular pollution in urban cities.

Not all vehicles today are relying on fossil fuels for locomotion. Electric vehicles have moved away from burning fuel and use electrochemical processes to produce the energy required for a vehicle to move. The by-product of fuel-cell vehicles is water and that is why these types of cars are known as zero-emission vehicles.

They store energy in an onboard battery and emit nothing from their tailpipe. More research needs to be invested in electric cars because as of now, they cannot handle difficult tasks such as ferrying heavy loads. There also exist hybrid-electric vehicles that use both a gasoline engine and an electric motor plus battery. They are a bit expensive, but eventually, they save at the gasoline pump.

The key to burning fewer fuels is making vehicles more efficient. Governments need to set fuel-economy standards for all passenger vehicles, including the advocacy for the use of technologies that help cars and trucks to further on a gallon of gasoline.

Most pickup, SUVs and minivans, on average travel less distance on a gallon of gas than they did decades ago. If this is implemented, it can help reduce the number of dangerous gases that are emitted into the atmosphere.

5. Having in Place Pollution Control Technologies

Some jurisdictions require the use of technologies that dramatically reduce the amount of smog-formation pollution and carbon gases coming from vehicles. For diesel vehicles, ‘two-way’ catalysts and engine controls reduce hydrocarbons and carbon monoxide emitted, although they still emit a lot of nitrogen oxide and toxic particulate matter.

Many people know about the effects of these emissions but play ignorant, while some simply do not know about them. Civic education, especially on the short-term and long-term effects of vehicular pollution on our lives and the planet in general, could open up eyes and help people make sane decisions.

It is a task that should be imposed upon every individual, government, non-governmental institutions and various other institutions all over the world, and they could awaken the society to the realities of pollution, its effects and how to reduce it. A sense of responsibility should be cultivated in each person so that they grow a desire and willingness to do the right thing.

old vehicles are responsible for more vehicular pollution because their transmission systems are outdated. They also cause accidents on the roads because of their many complications and getting rid of them for newer models serves as the most sensible and practical alternative or solution. Newer vehicles use new technologies and pollute the environment less than their older counterparts.

8. Control the formation of nitrogen oxide by investing in novel designs

some changes can be done to the vehicle’s operation parameters or designing them in a way that it lowers the high temperature of the combustion system, which produces the dangerous gas. Some high tech devices could also be used to reduce the formation and emission of the nitrogen oxide in combustion chambers.