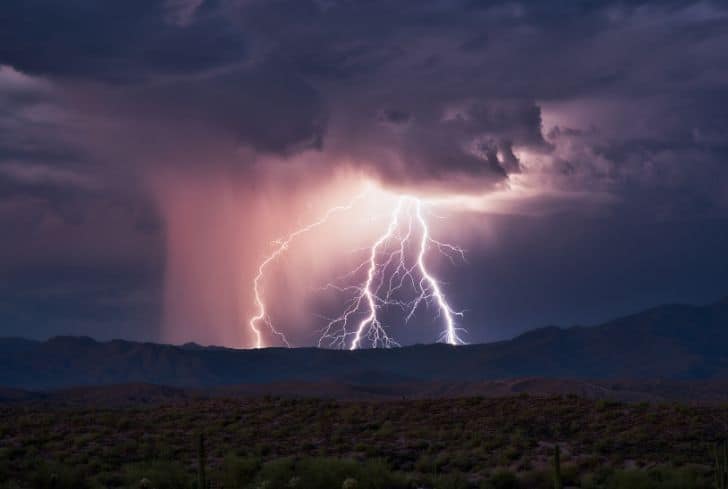 The weather, simply, is the temporary state or condition of the atmosphere. The weather is influenced by, among others, air pressure, temperature, and moisture. Here are some 35+ incredibly amazing facts about the weather.

Some scientists believe climate change is the cause of unprecedented melting of the North Pole, and that effects these very uncertain weather patterns. I think we should listen to those scientists and experts.

35+ Amazing Facts About the Weather

The great wildebeest migration, for instance, occurs between July and September, where wildebeests, gazelles, zebras, and other animals migrate in thousands from the Serengeti in Tanzania to the Maasai Mara in Kenya, seeking fresh grazing.

Millions of people are also migrating due to crop failure, water scarcity and the rise in sea levels.

Fact 2: Damages caused by weather results in billions of dollars across the globe: The weather can get wild in an instant, causing a lot of damage. Averagely, 100,000 people are killed in weather-related accidents every year.

They include tornadoes, hurricanes and floods. Hurricanes alone cost the United States about $28 billion each year.

Fact 3: Lightning has about 6 million strikes every day: There are about 8.6 million strikes of lightning every day. The perfect place to see lightning strikes is Lake Maracaibo in Venezuela, where there is an 80% chance of experiencing a nocturnal thunderstorm.

See also  Are Baby Wipes Biodegradable? (And Are Compostable?)

Fact 10: The hottest temperature recorded was in Greenland Ranch in Death Valley, California on July 10, 1913: There are some really hot places on earth, including the Gulf countries and in hot deserts.

However, Greenland Ranch in Death Valley, California recorded the highest temperature ever on July 10, 1913, with the temperature hitting a record 7°C (134°F).

To date, that is the highest recorded rainfall in one minute. The most rainfall in a week ever recorded was on Reunion Island in 2007 and was 5 metres, enough to cover a lorry

Fact 14: Lightning can result in forest fires: Lightning releases a bolt of electricity. Also, smoke and carbon microparticles present in the upper regions of the atmosphere can initiate static.

Such static can spark discharge, turning into lightning, which has resulted in massive wildfires in the coast of Brazil, Peru and Hawaii, burning acres of sugar cane. 10,000 forest fires in the US every year are also caused by lightning

Fact 15: The windiest place on earth is Chicago: Chicago is often referred to as the Windy City, as the city is very windy. However, the windiest place on the planet is Cape Denison, a rocky point at the Commonwealth Bay in East Antarctica, with winds reaching 153km/h

Fact 16: “Raining blood” has been recorded: Between July and September 2001, in Kerala, a southern Indian state, it rained blood. Well, it was not actual blood, but red rain. It was first thought to be because of a burst meteor, but a study concluded that the red rains were colored by airborne spores

Fact 17: Hurricane Irma is the longest-lasting hurricane or typhoon ever recorded: In September 2017, Hurricane Irma hit several Caribbean Island nations such as Cuba, the Bahamas and also the US state of Florida.

To date, the Hurricane is the longest-lasting hurricane or typhoon ever recorded. It had winds of up to 185mph and lasted for 37 hours and is the longest maintained intensity for any cyclone.

Fact 18: Rivers have frozen due to extremely cold weather: Sometimes it gets very cold that rivers freeze. For instance, the Mississippi River froze over its entire length in 1899. Also, the River Thames in the UK froze solid for two months in 1684.

There also are hailstorms, blizzards, snowstorms, thunderstorms, ice storms, and tropical cyclones. Typical cyclones can also be known as tropical depressions, hurricanes, tropical storms, typhoons or just cyclones, depending on your location

Fact 20: Earth can be colder than Mars: Logic dictates that the farther a planet is from the sun, the colder it gets, as it will receive less sunlight.

This means that Mars should be colder than Earth. However, surface temperatures can go as high as 20°C on Mars’ equator, with the temperatures on earth reaching -153°C at the poles.

Studies showed that the hurricane and subsequent escape of the pythons into the Florida Everglades led to a 99% decrease in the population of racoons and opossums, with some species of rabbits and foxes disappearing completely.

Fact 23: Heavy snowfall can completely diminish visibility: Heavy snowfall or a whiteout, makes it incredibly difficult to see, and can also make you feel sick. In Antarctica, snowfalls so hard sometimes that you might not be able to see your hand in front of your face.

Fact 24: The sunniest place on earth is Arizona (Yuma): Yuma, Arizona, receives over 4,000 hours of sunshine each year. This makes the city the sunniest location on earth.

Fact 28: Hurricane happens every year: In 1907, there were four tropical storms in the Atlantic and none was strong enough to be classified as a hurricane. It makes 1907 the only year the Atlantic failed to receive a single hurricane, over the last century

Fact 29: Lightning is sexist! Lightning seems to prefer to strike men over women with about 85% of its victims being men. Surprisingly, of those struck by lightning, the fatality rates are higher in women than men. Additionally, 90% of lightning strike victims survive

Fact 30: The weather outside earth is different: One of the most famous landmarks in the solar system is Jupiter’s Great Red Spot. It is famous because of an anticyclonic storm that has been in existence for at least 300 years

The reverse is also true in December, making it summer in the south and winter in the north because then, the Southern Hemisphere is tilted more towards the sun

Fact 32: Human activity affects the weather: We live in a world where climate change is taking its toll on the weather and human and animal lives also. It comes from the fact that pollution from factories, machinery and vehicles is contributing towards the greenhouse effect, which is causing global warming.

Due to this, polar ice caps are melting, disrupting the lives of polar bears and other polar animals, sea levels are rising and the ozone layer is gradually being damaged, exposing us to harmful ultraviolet rays from the sun.

Fact 34: Tropical countries are very warm: They are countries that lie along the equator, like Brazil, Kenya and Indonesia. With the equator running through them, it means they are closest to the sun, despite the earth’s tilt of 23.5°.

They, therefore, have a tropical climate and with extreme temperatures, it can become dangerous, mainly for humans, especially if they are exposed for prolonged periods.

Fact 35: Tundra are the coldest climates: Conversely, countries closest to the poles have some of the coldest weather in the world. Because of this, they hardly have trees. They include Greenland, Russia and Canada. They experience long winters and short, yet cold summers.

Fact 36: Traditionally, people predicting the weather by looking at plant and animal behavior: Long ago, people used to look to plants and animals, such as birds migration, for hints or prediction of weather.

Frogs croaking faster, sheep’s wool uncurling, ants forming a line, cows lying down, and pine cones opening up were used to predict the coming of rains. These predictors still exist, although people rarely use them due to the advancement of technology.