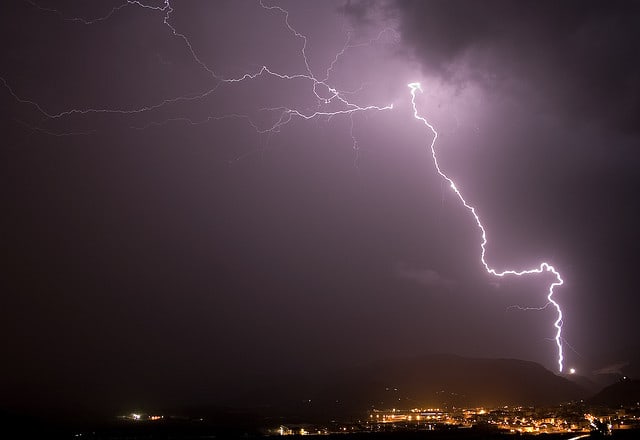 Lightning lights up the sky with a beautiful zigzag pattern. It is very intriguing to many people, as it has been for centuries. People have formed a variety of theories as to the cause of lightning. But, the most accepted of those theories is that lightning is a combination of clouds becoming electronically charged. Although no exact known cause of lightning is there we will take a look at the thoughts on the matter.

A Look at Lightning

Lightning occurs when electricity builds up during a thunderstorm. Lightning bolts are responsible for those zigzag patterns that you see in the sky. While pretty they are also very dangerous. The lightning bolt is very hot and reaches temperatures of 30,000 to 50,000 degrees. It is hotter than the surface of the sun!

When a thunderstorm takes place, precipitation particles collide with one another as they rub against each other during strong air flow. This strong air current here is due to the ascending  then descends in the air. When this happens the  colliding and rubbing of many water  crystals causes an electrical charge. Thus, there are both areas with negative and positive charge to develop within the thunderstorm.

When the difference in the charges at the lower section of the cloud becomes large enough, whereby reaching a certain strength, a giant “spark” occurs causing the flow of electricity to be released through the air to another point that has an opposite charge. This release of electrical energy is called a leader stroke which may be from one cloud to another or from one section of the cloud to another or from cloud to the ground. Once a connection is made and the path is complete, a surge of electrical current moves in the opposite direction back to the cloud and produce a flash of light which we call lightning. This process is called the main stroke.

Now from the information provided above we will take a closer look at how lightning works using for example the Cloud-to-Ground Lightning. First, due to the colliding and rubbing of many water droplets and ice crystals in thunderstorm cloud this creates a static electrical charge. After a while, the whole cloud fills up with electrical charges. Thus, causing areas of negative and positive charges to develop within the thunderstorm. The positive charges form at the top of the cloud and the negative charges form at the bottom of the cloud.

The positive and negative electrical charges in the cloud then separate from each other, where the positively charged snow crystals moves to the upward top section of the storm cloud while the heavier negative charge ice crystals and water droplets drop to the lower section of the cloud. Once these positive and negative electric fields become large enough, a giant spark called lightning occurs between two charges within the cloud.

A Better Understanding of Lightning

Lightning is bright electrical flashes that occur in the sky. They take place when there is a thunderstorm, as well as during volcanic eruptions. Lightning can travel very quickly, with speeds of more than 60,000 meters per second. Lightning is responsible for a number of deaths every year. Lightning is beautiful as it lights up the sky but it is also dangerous!

Lighting works by the formation of the cumulonimbus cloud and connects with electrons when a storm begins to brew in the sky. Although scientists have yet to pinpoint the exact cause of lightning, this is one theory that is known.

When water from bodies of water, like lakes and rivers, evaporate and dissolve into the atmosphere, convection occurs. But when this evaporates water meets cold air and warm air at the same time it becomes dense and thunder clouds develop. Sometimes this also causes ice or snow particles to form.

What is Cloud-to-ground lightning?

Intra-cloud lightning is another common type of lightning and occurs when there are both positive and negative charges within the same cloud. These charges become large enough and cause a giant spark between them like static electricity.

When you see lightning you usually also hear thunder. The two go hand in hand. Thunder is a really loud noise. It is caused by the cold and hot air meeting and causing it to expand and heats up to temperatures that are more than 54,000 degrees F and is approximately 6 times hotter than the surface of the sun. When this happens the outcry that you hear is thunder.

Plentiful Information for You

Has this answered some of the questions that you have had about lighting and the cause of it? We certainly hope so. Lightning, as well as thunder, is certainly very interesting and information that you need to know! Now you do.