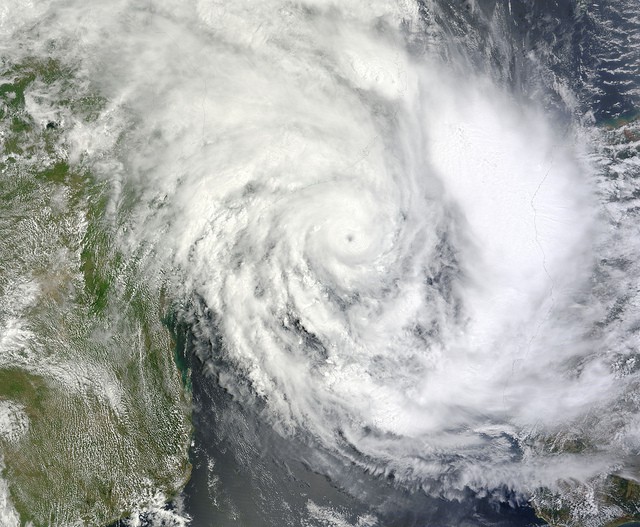 A tropical cyclone looks a lot like a really large whirlpool that is found out in the tropics. It looks like a huge mass of air that just rotates, and while it does look like that- it isn’t really as much like the pictures make it out to be. In fact, they are really more disc like in shape than cyclonic.  When you look at them from space, you can really see a lot more about them, even though you can’t see their close details. Taking a look at how they are formed and their structure will give you more of an appreciation for this type of storm.

Tropical cyclones are really a lot like a traveling source of heat. They feed on heat that is released from the moist air and condensation of the oceans.  Water temperature above 27 degrees is what required as tropical cyclones develop only over warm waters. As low-level winds flow into the group of thunderstorms over warm tropical waters, they evaporate water from the ocean surface. This process transfers energy from the ocean into the atmosphere. The winds rise up and release that energy into the air as they form clouds and precipitation. This warms the air and makes it almost like a hot air balloon, and encourages more warm air to flow in from the outside.

Tropical cyclones actually generate power, which gives them the ability to survive over the water. This is why they don’t usually make landfall, and when they do they don’t last for very long. They weaken tremendously after they hit land, because they depend on the moist air to be able to stay going strong. As temperature of water is not warm over higher altitudes, therefore cyclones do not form at higher altitudes. Most people think that a tropical cyclone is actually formed very quickly, but it starts out small, and then it begins to pick up energy as it goes.  It takes some time for it to fully strengthen to its full potential.

See also  Do Landfills Contaminate Groundwater and How Do They Impact it?

Structure of the Tropical Cyclone

The Eye of the Storm

Next, you have the subsidence that comes from the rainbands. When rain falls from the tropical cyclone, it is fed back into the eye of the storm, and it begins to rotate back around. This is how it keeps going. To preserve the structure of the cyclone, you have to make sure that the forces are not disrupted. As the cyclone matures, it will actually have more and more subsidence.

See also  Is Pretty Litter Biodegradable? (And Bad for the Environment?)

Tropical cyclones can only be developed if the circumstances are favorable for the cyclone. If the circumstances are not where they should be, then the storm will just continue to decrease in weakness. As they first start out, they don’t develop further unless certain criteria are met. Once they are formed, they can last anywhere from a few days to a few weeks, depending on the conditions surrounding the storm. Not all of them will make it all the way to a full blown tropical cyclone, but some will. Only about half of them will actually make it all the way.

As you can see, there is a lot that goes into the formation and structure of a tropical cyclone. Most people will never experience this type of natural disaster, because they tend to stay out on the ocean. It is mainly the countries in the middle east and Asia that will actually have more experience with these storms. This is because they are much more prevalent there.