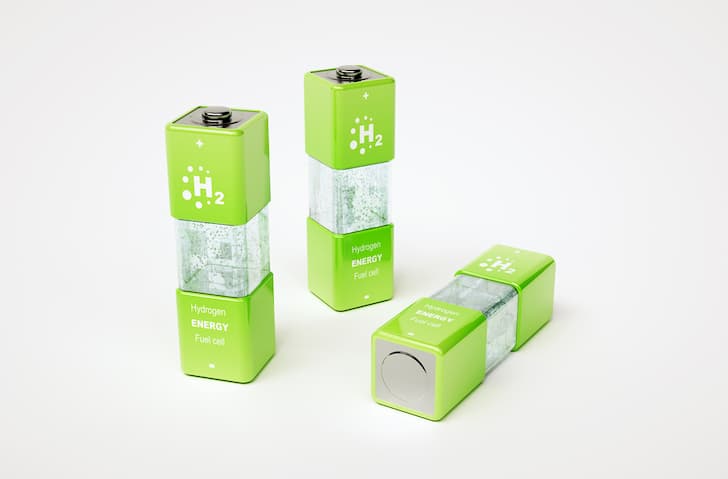 The hydrogen fuel cell is a device that has been designed to convert chemical energy into electricity. It is supposed to be a safe and clean alternative to burning fossil fuels to power, amongst other things, our cars, since its waste products, rather than huge amounts of carbon dioxide and even sulfur particles, the hydrogen fuel cell releases carbon dioxide in smaller amounts and water.

The basic mechanism behind these sorts of fuel cells is that energy is created from a reaction of positive hydrogen ions and an oxidizing agent, which is often oxygen. Unlike batteries, hydrogen fuel cells need a continuous source of oxygen or other fuel in order to keep the chemical reaction happening, which means that they can run continuously as long as they are supplied with the essential inputs.

Hydrogen is the most common element available on planet Earth. An atom of hydrogen consists of only one proton and one electron. Though it is available in plenty, it doesn’t occur as a gas on the Earth. Water, for example, contains two atoms of hydrogen and one atom of oxygen bonded together. A process called electrolysis is required to separate water into its components of oxygen and hydrogen.

A hydrogen fuel cell combines hydrogen and oxygen to produce electricity, heat, and water. As hydrogen is high in energy and produces almost no pollution, it is used as fuel to propel space shuttle and rockets into orbit. These cells power the shuttle’s electrical systems and produce clean water as a byproduct. It provides DC (direct current) voltage that can be used to power motors and run any number of electrical appliances.

As we explore ways to bring price relief and bolster our country’s energy independence, one significant energy source has emerged as a potential solution, hydrogen fuel cells.

How does a Hydrogen Fuel Cell Work?

The electrons are forced to go through an external circuit, generating an electric current,a flow of electricity and excess heat. The protons migrate through the porous electrolyte membrane to the cathode, where they unite with oxygen and the electrons returning from the electrical circuit to produce water molecules, heat and other products. The combination of oxygen and ionized hydrogen serve as the basis for the chemical reaction. As there are no moving parts, fuel cells operate silently and with extremely high reliability.

A polymer electrolyte membrane permits the appropriate ions to pass between the anode and the cathode. If the electrolyte gave free control for all electrons or ions to pass freely, it would disrupt the chemical reaction. At the end of the process, the positively charged hydrogen atoms react with the oxygen to form both water and heat while creating an electrical charge.

Hydrogen fuel cells are classified by the type of electrolyte they use and the difference in start-up time ranging from 1 second for proton exchange membrane fuel cells (PEM fuel cells, or PEMFC) to 10 minutes for solid oxide fuel cells (SOFC). A related technology is flow batteries, in which the fuel can be regenerated by recharging.

Within the fuel market, there are many different applications with different power requirements. In order to provide adequate power, individual fuel cells can be assembled together, forming a stack. A fuel cell stack can be sized for just the right amount of energy for the application. Individual fuel cells produce relatively small electrical potentials, about 0.7 volts, so cells are “stacked”, or placed in series to create sufficient voltage to meet an application’s requirements.

In addition to electricity, fuel cells produce water, heat and, depending on the fuel source, very small amounts of nitrogen dioxide and other emissions. The energy efficiency of a fuel cell is generally between 40 and 60%; however, if waste heat is captured in a cogeneration scheme, efficiencies of up to 85% can be obtained.

Compared to traditional means of powering cars and heating homes, for instance – such as using fossil fuels like coal and gas – hydrogen fuel cells are a lot more efficient. They produce a lot more energy for the amount of components that are used.

This makes them a lot cleaner than fossil fuels as more of them need to be burned, and more chemicals and carbon dioxide need to be released into the atmosphere in order to achieve the same amount of energy.

Whereas mining for, transporting and refining fossil fuels is a messy and noisy affair, hydrogen fuel cells actually operate silently. Compared to internal combustion engines in, for instance, cars, which are very noisy, hydrogen fuel cells do not make any sound. (If these were to be used for cars, therefore, artificial engine sounds would need to be added for the safety of pedestrians and animals.)

Fossil fuels are found all over the world, but some countries have a monopoly on, for instance, gas and oil. This means that they can negotiate with other countries about the price of fossil fuels and can even artificially inflate the price, which is felt by the consumers at the end of the line.

On the other hand, because hydrogen fuel cells can be made within any country and are not owned by anyone person, company or country, they cause none of the global economic problems that fossil fuels do. This means that countries all over the world can be more self-reliant and less dependent on other countries, offering great energy security for each and every nation that chooses to use hydrogen fuel cells.

Hydrogen fuel cells tend to last a lot longer than other normal batteries that use chemicals to produce energy. Because doubling the operation time of the hydrogen fuel cell means doubling the amount of fuel rather than doubling the capacity of the unit (as with a battery), it is much easier to make the fuel cells run for longer periods of time without extra effort, money or stress.

6. No Need for Grids

Fossil fuels are distributed via energy grids to ensure that everyone who needs energy gets it. Hydrogen fuel cells can be grid-independent because they can be used anywhere that has a source of power as well as a source of water. This, in turn, means that the generation of fuel by hydrogen fuel cells can be distributed equally without the need for a centralized grid.

Unfortunately, hydrogen fuel cells do also present some issues that are, so far, preventing their universal release into the energy market. Although there are a great many benefits, there are some challenges that seem to outweigh these bonuses, which is why developers and scientists are still hard at work, developing better, more efficient and safe hydrogen fuel cells so that soon they can be a viable alternative to fossil fuels.

1. Can be Quite Expensive

Unfortunately, because of the need for materials such as platinum in the creating of hydrogen fuel cells, on average, it can be a lot more expensive to make these cells rather than drill for, transport and refine fossil fuels. Of course, over the course of a number of years, hydrogen fuel cells will end up paying for themselves in the amount of money that they will save, but the upfront cost is a little steeper than most investors would like.

2. Not Beneficial for the Big Companies

Big companies are certainly not going to be contributing money to the development of hydrogen fuel cells. Some of the biggest companies in America are those that deal with fossil fuels in one capacity or another. It is in their interests to keep distributing fossil fuels and, when they start to run out, to collect more and more money as demand pushes the price up and supplies start running slightly lower. Hydrogen fuel cells offering less money to these sorts of corporations may be seen as a problem for business people.

Unlike coal, gas and oil, hydrogen fuel cells are not terribly robust. Unfortunately, because of the delicate and intricate workings that they require, they are more sensitive to their surroundings and environment, meaning and contamination and temperature can render them useless. For the time meaning, this means that they cannot be used in the very hot or the very cold and, if this problem is not resolved, this will eventually mean that places that often suffer from extreme cold or heat will not benefit from this next technology.

The main idea so far for the implementation of hydrogen fuel cells into everyday life is to put them into cars. The technology has been developed with this in mind, and the science works perfectly. The only real problem is the issue of safety. Hydrogen is highly flammable – more so than regular fuel – and is harder to contain than oil.

This means that any car fitted with hydrogen fuel cells is a lot more likely to blow up or set on fire if it is exposed to extreme heat, if it breaks down or if it overheats. This safety issue is obviously a huge problem for those hoping to implement this new power source into their cars.